The revocation of former CIA Director John Brennan's security clearance, and Trump's tweets this week suggesting that both the firing of Peter Strzok and the decision on Brennan were made as petty revenge, roundly clear the decks for Special Counsel Robert Mueller's obstruction of justice recommendations.


President Trump drew a direct connection between the special counsel investigation into alleged Russian interference in the 2016 election and his decision to revoke the security clearance of former CIA Director John Brennan and review the clearances of several other former officials.

In an interview Wednesday, Mr. Trump cited Mr. Brennan as among those he held responsible for the investigation, which also is looking into whether there was collusion between the Trump campaign and the Kremlin. Mr. Trump has denied collusion, and Russia has denied interfering.

Mr. Brennan was director of the Central Intelligence Agency in the Democratic administration of former President Obama and one of those who presented evidence to Mr. Trump shortly before his inauguration that Russia had interfered in the 2016 election.

“I call it the rigged witch hunt, [it] is a sham,” Mr. Trump said in an interview. “And these people led it!”

He added: “So I think it’s something that had to be done.”

Mr. Brennan—who since leaving office has become a frequent critic of the Republican president—in a tweet called the revocation of his clearance “part of a broader effort by Mr. Trump to suppress freedom of speech & punish critics.” He wrote it “should gravely worry all Americans, including intelligence professionals, about the cost of speaking out.”


Brennan is correct here, but let's set some ground rules on this particular debate.  First of all, Brennan was a terrible Obama choice, and he was problematic well before he ever became CIA Director.  But at least he went out swinging on Donald Trump and Russia.  He may be a career CIA crapsack, but he recognizes the threat that Trump represents.

So yeah, at this point Mueller has to be ready to recommend obstruction, and the fight will go to SCOTUS.  Trump wants to make sure Brett Kavanaugh is in place before that happens.

Nate Silver and the 538 crew give the Democrats at 70-75% chance to take the House at this point, with a predicted gain of 32-35 seats, with the polls showing an average of an 8-point lead in the generic ballot for the Dems. 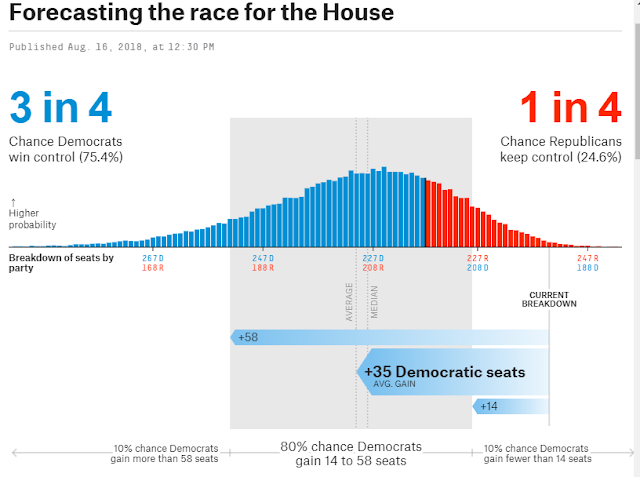 Things are so bad for the GOP at this point that Republicans are openly predicting the loss of control of the House will assure an easy Trump 2020 reelection bid, because Democrats can never, ever win.

There’s a new way of demonstrating loyalty to Donald Trump and his Republican Party: Claiming that the president could not only survive an impeachment effort, but that it would guarantee his victory in 2020.

The idea gaining currency on the right is that Trump can be Bill Clinton, not Richard Nixon. It depends on a delicate political calculation — that a Republican-held Senate would never follow a Democratic House and vote to remove Trump, and that voters tired of the long-running Russia scandal will, as they did in the late 1990s with Clinton’s Monica Lewinsky scandal, want to move on.

The notion has surfaced spontaneously among a diverse set of conservatives, including politicians with Trump’s ear and young ultraloyalists of the president whose institutional knowledge of the GOP begins with its new standard-bearer. They’re also the die-hards who aren’t afraid to align themselves with pro-Trump positions even before the president has warmed to them himself.

In interviews, more than a dozen Republican politicians, activists and consultants — including some current and former Trump campaign aides with direct lines to the president — said they are increasingly convinced a Democratic House victory in the midterms and subsequent impeachment push would backfire and ultimately help the president in 2020.

“If they take the House, he wins big,” Barry Bennett, a former senior adviser to the Trump campaign, told POLITICO. “The market always overcorrects.”


The reality of course is that Clinton was capable of contrition.  "I feel your pain" saved him, whereas Trump couldn't perform even the most simple act of empathy.  Of course, it wasn't enough to save Al Gore because of the Supreme Court, and much the same may await us in 2020.  There's no reason to believe Trump will win the popular vote then, either.

But he can still very well end up being reelected...
Posted by Zandar Permalink 4:00:00 PM No comments:

Email ThisBlogThis!Share to TwitterShare to FacebookShare to Pinterest
StupidiTags(tm): 2018 Elections, GOP Stupidity, Trump Regime, Vote Like Your Country Depends On It, Wingnut Stupidity

At this point, we have to actively consider that Donald Trump is encouraging countries like Russia to use cyber warfare against the United States in order to take advantage of the damage done by both state and non-state actors to help ensure Republicans maintain control of Congress after the midterm elections.


President Trump has reversed an Obama-era memorandum governing how and when the U.S. government can deploy cyberweapons against its adversaries, in an effort to loosen restrictions on such operations, according to people familiar with the action.

Mr. Trump signed an order on Wednesday reversing the classified rules, known as Presidential Policy Directive 20, that had mapped out an elaborate interagency process that must be followed before U.S. use of cyberattacks, particularly those geared at foreign adversaries.

Although the policy was classified, its contents were made public when it was leaked in 2013 by former intelligence contractor Edward Snowden. It was signed by Mr. Trump’s predecessor, Barack Obama, in 2012.

It wasn’t clear what rules Trump is adopting to replace the Obama directive. A number of current U.S. officials confirmed the directive had been replaced but declined to comment further, citing the classified nature of the process.


Because I totally trust this regime with taking the safeguards off cyber warfare, don't you?

The move was described as an “offensive step forward” by an administration official briefed on the decision, one intended to help support military operations, deter foreign election influence and thwart intellectual property theft by meeting such threats with more forceful responses.

The policy applies to the Defense Department as well as other federal agencies, the official said, while declining to specify which specific agencies would be affected. John Bolton, Mr. Trump’s national security adviser, began an effort to remove the Obama directive when he arrived at the White House in April, the official said.

Some lawmakers have raised questions in recent months about whether U.S. Cyber Command, the chief agency responsible for conducting offensive cyber missions, has been limited in its ability to respond to alleged Russian efforts to interfere in U.S. elections due to layers of bureaucratic hurdles.

As designed, the Obama policy required U.S. agencies to gain approval for offensive operations from an array of stakeholders across the federal government, in part to avoid interfering with existing operations such as digital espionage.

Of course, there's still Trump doing everything he can to placate Putin, too.

When President Trump signed a $716 billion military spending bill on Monday, he claimed the authority to override dozens of provisions that he deemed improper constraints on his executive powers.

In a signing statement that the White House quietly issued after 9 p.m. on Monday — about six hours after Mr. Trump signed the bill in a televised ceremony at Fort Drum in New York — Mr. Trump deemed about 50 of its statutes to be unconstitutional intrusions on his presidential powers, meaning that the executive branch need not enforce or obey them as written.

Among them was a ban on spending military funds on “any activity that recognizes the sovereignty of the Russian Federation over Crimea,” the Ukrainian region annexed by Moscow in 2014 in an incursion considered illegal by the United States. He said he would treat the provision and similar ones as “consistent with the president’s exclusive constitutional authorities as commander in chief and as the sole representative of the nation in foreign affairs.”


The only countries that recognize the annexation of Crimea by Russia are Russia and the United States.  Think about that.