Last Call For Sticking With Don

The reasons Republicans will stay with Trump is simple: he has no problem hurting liberals, and he can appoint conservative federal judges who will shape the courts for decades.


Although he’s been thwarted so far on his legislative agenda before Congress, most notably on health care, President Donald Trump has a big opportunity to reshape another branch of government outside his control: the federal judiciary. He has already moved swiftly to fill an unusual, inherited vacancy on the Supreme Court, and now his aides are working their way through a large number of openings on the lower federal courts. Some of his first picks are up for a Senate committee vote this month.

Justice Neil Gorsuch, with only a few months on the high court under his belt, already embodies the kind of influence Trump seeks to have on the third branch. Gorsuch, who replaced the late Antonin Scalia, reestablished the 5-4 advantage conservatives long enjoyed when it came to most hot-button social issues. Gorsuch has cast consistently conservative votes on such topics as Trump’s travel ban, gun rights, and the separation of church and state. And he doesn’t even turn 50 until August.

But this congressional pocket veto of Garland, a 64-year-old moderate and chief of the influential U.S. Court of Appeals in Washington, was simply the most public manifestation of a longer-term strategy. After gaining control of the Senate in 2015, Republicans made it their mission to slow-walk Obama’s nominations for the lower courts. This effort contributed to the relatively large backlog of 107 vacancies on trial and intermediate-appellate courts that Trump inherited. That’s more than what awaited four of Trump’s five immediate predecessors, according to the public-affairs website Ballotpedia. Only President Bill Clinton had more initial vacancies, with 111. By contrast, Obama found only 54 lower-court vacancies when he took office, while President George W. Bush had 84. Trump’s starting batch of 107 represents 12 percent of all 890 federal judicial positions.

Those vacancies, and the ones to come as more judges retire (the number has already jumped to 136 in the six months since inauguration) offer Trump the chance to sculpt the courts to his liking. During the campaign, he said he would “appoint judges very much in the mold of Justice Scalia,” a forceful conservative who unexpectedly died in February 2016. Perhaps more than some of his liberal detractors gave him credit for, Trump, 71, understood the importance of the judiciary to Republicans who were reluctant to support him. “If you really like Donald Trump, that’s great, but if you don’t, you have to vote for me anyway,” he said at a rally in Iowa last July. “You know why? Supreme Court judges, Supreme Court judges.”


Mitch McConnell winning back the Senate in 2014 after dismal Democratic turnout (along with Trump's win in 2016) will haunt Democrats for decades, and the fact Democratic voters simply did not give a damn if Mitch stole a Supreme Court nomination and hundreds of federal court nominations and "voted their conscience" for anybody but Hillary will harm us, our children, and our planet for years and years to come. 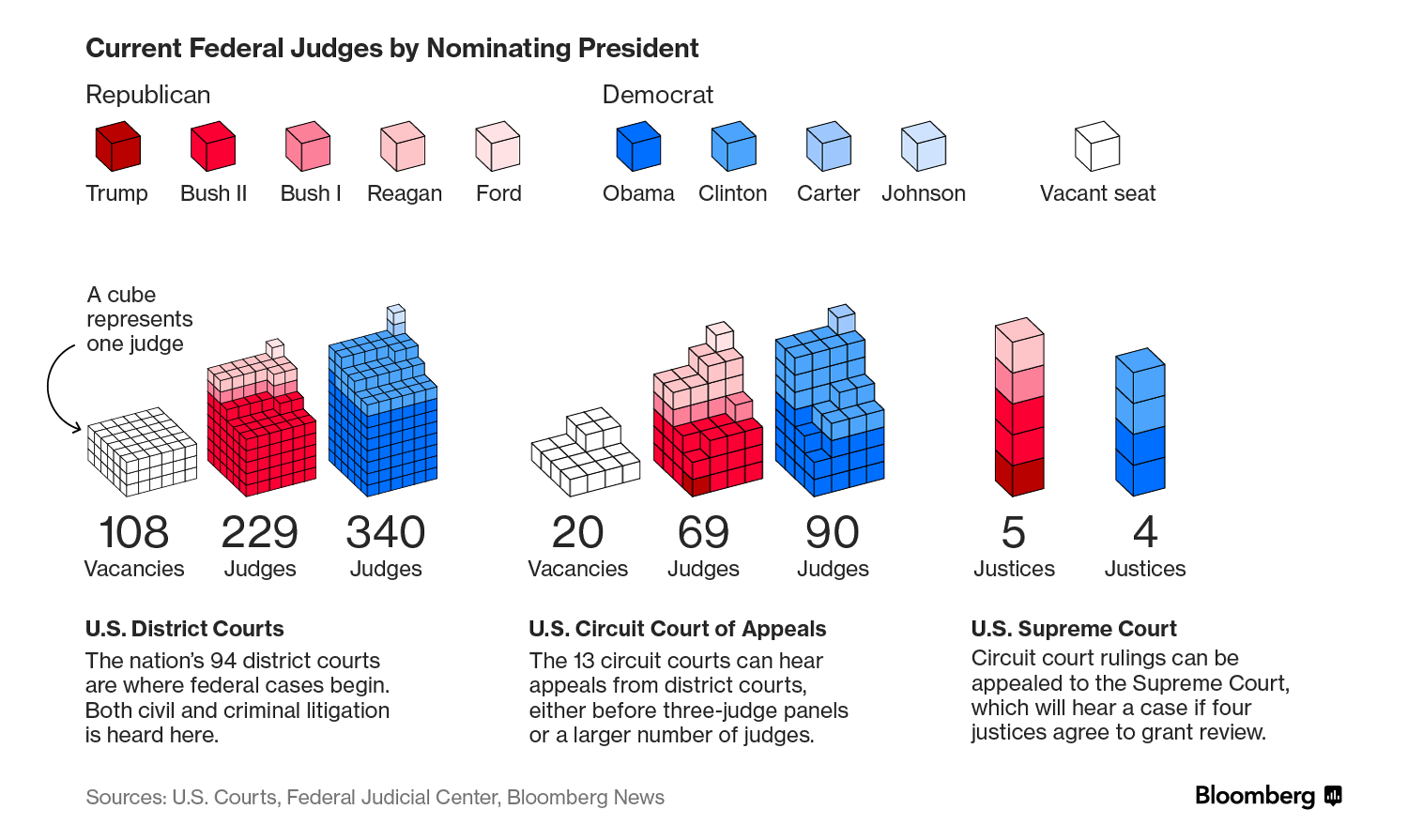 But you really showed that bitch, huh guys?

The Revenge Of The Know Nothings

The GOP plan to destroy trust in American institutions like higher education and the media so that they can in turn be destroyed is proceeding apace, as the latest Pew Research poll shows massive partisan dissonance between Democrats and Republicans on how the world of knowledge is viewed.


Republicans and Democrats offer starkly different assessments of the impact of several of the nation’s leading institutions – including the news media, colleges and universities and churches and religious organizations – and in some cases, the gap in these views is significantly wider today than it was just a year ago.

While a majority of the public (55%) continues to say that colleges and universities have a positive effect on the way things are going in the country these days, Republicans express increasingly negative views.

About as many Democrats and Democratic-leaning independents think the news media has a positive (44%) as negative (46%) impact on the way things are going in the country. The share of Democrats holding a positive view of the news media’s impact has increased 11 percentage points since last August (33%).

Republicans, by about eight-to-one (85% to 10%), say the news media has a negative effect. These views have changed little in the past few years.

Aside from their growing differences over the impact of colleges and the news media, Republicans and Democrats remain far apart in their assessments of the effects of other institutions on the nation. Democrats continue to be more likely than Republicans to view labor unions positively (59% vs. 33%), while larger shares of Republicans have positive views of churches and religious institutions (73% of Republicans vs. 50% of Democrats) and banks and financial institutions (46% vs. 33%).

Yet even as partisan divides in views of some of these institutions have widened in recent years, the public’s overall evaluations are little changed. Majorities of Americans say churches and religious organizations (59%) and colleges and universities (55%) have a positive effect. Nearly half (47%) say labor unions have a positive impact; 32% see their impact negatively.

Views of the impact of banks and other financial institutions are more negative (46%) than positive (39%). And by roughly two-to-one (63% to 28%), more Americans say that the national news media has a negative than positive effect on the way things are going in the country.

The survey finds that Republicans’ attitudes about the effect of colleges and universities have changed dramatically over a relatively short period of time.


That's a nice way of putting it, when the reality is "Republican attitudes about traditionally liberal institutions in America is that those institutions are summarily at fault for creating a society where a black guy can become POTUS".

But really the return of white nationalism to power has started with attacking the media and attacking the universities that made Obama possible.  They will have to go, and under Trump, there's a good chance that both will suffer catastrophic damage.

While the Trump regime is waist-deep in saving Don Jr.'s ass and the Senate GOP is still trying to push Trumpcare over the finish line, there's still plenty of damage that GOP governors can do to Medicaid expansion and taking health care away from thousands, as our own Gov. Matt Bevin is trying to prove.


In a move the state says would save money but cut another 9,000 people from Medicaid, Gov. Matt Bevin's administration is seeking permission from the federal government for more changes to the state-federal health plan that serves 1.4 million Kentuckians.

The changes, filed this week, revise a sweeping plan to the state's Medicaid program Bevin proposed last year seeking federal permission, or a "waiver," to reshape the program in order to impose more costs and personal responsibility on consumers.

The Bevin administration said the changes, aimed largely at "able-bodied" adults, are part of an effort to "provide dignity to individuals" and help them toward "independence from public assistance."

The changes are not designed to cut anyone from Medicaid, according to Doug Hogan, a spokesman for the Cabinet for Health and Family Services. Rather, the administration expects Medicaid enrollment to drop as people transition to employer health plans or choose not to participate in requirements such as work or volunteering.

But health care advocates in Kentucky said the changes do nothing to improve the proposal Bevin introduced last year and worsen it in several ways, most significantly increasing from about 86,000 to 95,000 the number of people expected to lose health coverage over the five-year life of the plan.

They say many people will find the new requirements excessively complex and will lose coverage because they are unable to meet them.

"In my mind, this just takes a bad waiver and makes it worse," said Dustin Pugel, a research associate with the Kentucky Center on Economic Policy.


So even if the Senate GOP Trumpcare plan crashes and burns, nearly 100,000 Kentuckians are going to lose their Medicaid anyway as Bevin plans to add more hoops to jump through and make it too hard for thousands to get.  And remember should Trumpcare pass, these waiver plans are exactly what Republican governors will use to make Medicaid so difficult to qualify for again that tens of millions will lose their health care for good.

But even if existing Obamacare law doesn't change, Trump's HHS will approve all kinds of waivers for red states, and the number of uninsured will rise dramatically nationwide.  If "make it nearly impossible to get and then blame people who don't go through the hoops" sounds familiar, it's the GOP plan on abortion and voter ID access too.  Now it's coming to Medicaid.

And Bevin can't wait to toss tens of thousands to the wolves.
Posted by Zandar Permalink 10:00:00 AM No comments: