Time for another Marvel movie review, true believers, and this time we've got Doctor Strange on deck starring Benedict Cumberbatch as the titular Sorcerer Supreme. 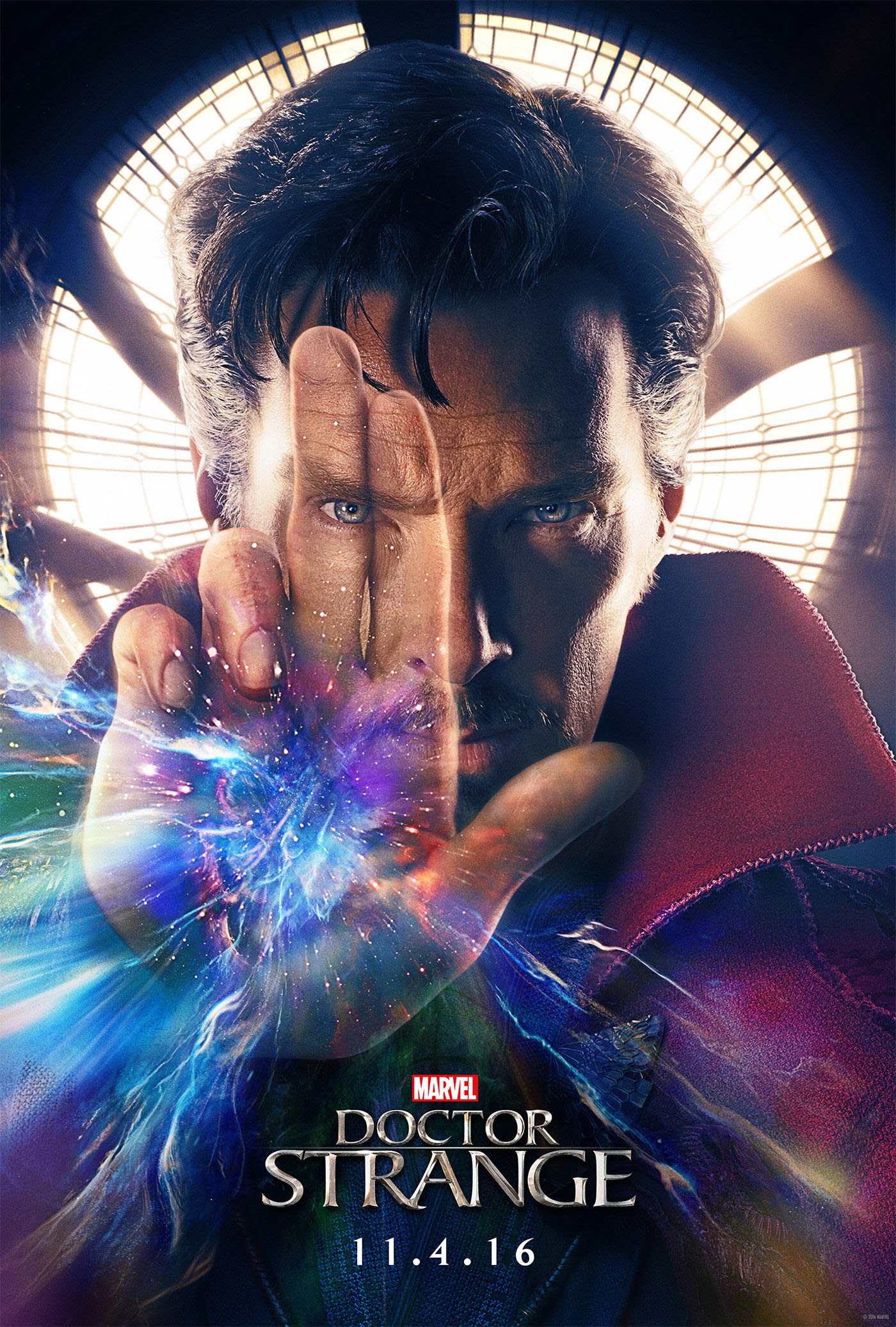 Marvel Studios being willing to take a chance on its lesser-known heroes paid off in spades with both Guardians of the Galaxy and Ant-Man doing well enough to get high-profile sequels, and I think Doc is no different here. We'll definitely see more of him.

The story starts off with world renowned NYC neurosurgeon Dr. Stephen Strange showing off that his skills can indeed pay the bills, even impressing his former lover Dr. Christine Palmer (Rachel McAdams) with a casual display of medical brilliance, on top the world and about to receive yet another prestigious award when a rainy night car accident changes everything in an instant.

Strange comes to with the lifeblood of his trade, his hands, irreparable, knowing full well that the only scalpel slinger gifted enough to have saved him was himself. Becoming increasingly desperate, he turns to a former spinal injury victim who was saved by Nepalese mystics, and thus begins one amazing adventure as he meets The Ancient One (a bald Tilda Swinton) and her students Mordo (Chiwetel Eijofor) and Wong (Benedict Wong) and learns that science can't explain everything.

The bad guy is the scene-chewing Kaecilius (the marvelous Mads Mikkelsen) and when I say the scenery chews in this film I mean it quite literally, apparently mystical arts fights involve a mirror dimension that makes the visual tricks in Inception look like a low budget student film as space folds in on itself in a kaleidoscope of gears and moving parts.

Visually this is Marvel's most striking film to date, even putting the effects in Guardians to shame. It's worth the price of admission just for the fight scenes alone but everything about this film and ILM's outstanding effects work stands out. See this film on the biggest screen you can.

I really enjoyed this one, as with most Marvel films the plot is bit threadbare but the acting and writing come through, Cumberbatch is as good of a Stephen Strange (both before and after his accident) as Robert Downey Jr. is Tony Stark or more recently, Chadwick Boseman is as T'Challa in the Marvel cinematic universe.

As always, stick around for the end credit scenes and enjoy the continuity to previous MCU films, as I'm looking forward to Guardians 2 in May, Spidey in July, and Thor: Ragnarok this time next year. It's a good flick to take your mind off the You Know What on Tuesday.

Hopefully we'll make some magic in a few days.
Posted by Zandar Permalink 8:00:00 PM No comments:

It's About Turnout Now

There's now enough evidence in the early voting numbers to suggest that Republican efforts to suppress voters of color in a post Voting Rights Act-era are working exactly as intended. Using this perspective, there is only marginal evidence that the surge in Latino turnout in 2016 is resulting in an outsize Latino electorate. Florida is the only state where Latino early voting is outpacing both population growth and growth in the early vote for non-Latinos.

In two other states with large Hispanic populations — Texas and Nevada — Latinos are underperforming relative to population growth and steady or increasing early voting by whites. Although many of these white voters may be Democrats, this suggests a more nuanced story about the likelihood that high Latino early voting alone will reshape the electoral landscape.

At the same time, early voting among African Americans is lagging behind their share of the eligible electorate, often in dramatic ways.

In 2012, African Americans overperformed in states such as North Carolina and Texas. But this year, black voting rates are trailing other groups relative to their size of the electorate, with some swings on the order of 5 to 10 percentage points.

Meanwhile, white voters constitute a larger share of the early vote than in the past two election cycles. For example, in North Carolina and Florida, whites were underperforming in the early vote a week before the 2012 election. But they are now overperforming — and substantially so in Florida.

Of course, it is not entirely clear what this suggests for Tuesday’s outcome.


It does suggest that overall turnout in early voting states is up.  That's a good sign for Democrats.  But in all six of the above states, it's white voters who are turning out at a higher percentage.  That's better news for the GOP.  If these white voters are college-educated voters that Clinton would be winning for the first time in decades, then it's good news for her.  If these are disaffected white Trump voters driven to the polls by anger, who never really bothered to vote before, then it's big for him.

Either way these are the votes that the polling models and turnout scenarios have missed in the past.

We'll see what happens here in the final week.

Not The Best Comparison

Kentucky is at this point considered a pretty reliable state for Trump, polls have shown him with a more than 20-point lead earlier this year, and this week a poll from Western Kentucky University had him up by 17 points, 54-37% (and Rand Paul, also expected to win easily in that same poll 55-39%). GOP Gov. Matt Bevin is comfortable enough with those numbers to openly brag that Trump is following his path to victory in Kentucky and will win on Tuesday.

In early October, Gov. Matt Bevin stood in the Capitol Rotunda, a few short steps from his office, and recorded a video because he had caught wind of a Democratic press conference that would call his record on education funding into question.

“They’re going to come in here and hypocritically lie to you about the focus of education and that of this administration for education,” Bevin said, staring unflinchingly at the camera.

Earlier, Attorney General Andy Beshear released a text that Bevin had sent him, calling Besear’s office “an embarrassment to the commonwealth.”


It was a wild day by Frankfort standards, but in the grand scheme of 2016, it was nothing out of the ordinary. For more than a year, the national press had been following another unorthodox politician vowing to shake up the system: Donald Trump.

“These guys are not in the system and they don’t care about what the political rules are about,” said Les Fugate, a Republican lobbyist and senior vice president of RunSwitch Public Relations. “They will forge their own path.”

For Bevin and Trump, that path has been similar in many ways.

Both were educated in the private school system before becoming wealthy businessmen. Both ran for office as political outsiders promising to disrupt the establishment and rallying the support of those who felt left behind by their government. Both overcame long odds in a vicious primary full of personal attacks to become the major nominee of their party.

Bevin was elected despite trailing in pre-election polls. Now, as the presidential race grows tighter in swing states, the question lingers: can Trump pull a Bevin-like upset on Tuesday?

“I think he’s going to win,” Bevin told WHAS radio in Louisville on Tuesday. “I think he’s losing in the same way I was supposedly losing a year ago at this time.”


The problem with Bevin's theory is that most American voters are smarter than the ones in Kentucky. I know that's not saying much, after all I live here and get to witness just what a populace that elected Matt Bevin is capable of in the first place, but if there's one state where it's totally cool to say that not only that you think Trump will win but is following your game plan, it's here.

Sadly, here in coal country, the growing economy isn't growing very much in the Appalachian counties, and there's a whole hell of a lot of "economic anxiety".  The folks here blame the Clintons the way most people blame broken mirrors or black cats crossing their path.  They have been taught to hate pretty effectively, and Clinton has about as much chance of winning here as I do breaking a four-minute mile running backwards.

Bevin thinks he's Trump before Trump was cool?  Sure man, keep that up.