Last Call For The Party's Over

The Tea Party's over, that is.  Tea Party support among Republicans has plummeted from where it was in Gallup's numbers in November 2010.

To be sure, this is much more positive than Democrats' views of the Tea Party, with a majority describing themselves as opponents of the political movement. However, it is also far less supportive than three years ago, when two-thirds of Republicans identified as Tea Party supporters. 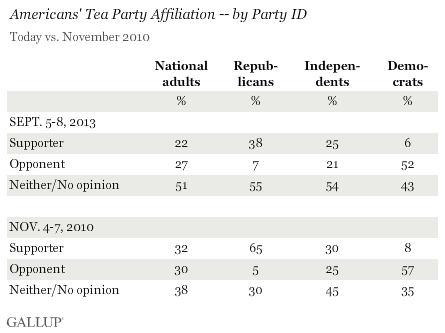 The signs of a crack-up in the GOP are all there, and the outcome of the shutdown nonsense is shaping up to be a total disaster for the Republican brand.  The opportunity for the Democrats is huge if they play their cards right.

Zandar's Thought Of The Day

Miss Piggy is joining Kermit the Frog in the Smithsonian.


(Jacquelyn Martin/ Associated Press ) - A Miss Piggy muppet, that was used on “The Muppet Show,” is all dressed up during a ceremony to donate additional Jim Henson objects to the Smithsonian’s National Museum of American History in Washington, Tuesday, Sept. 24, 2013. Miss Piggy is finally joining Kermit the Frog in the Smithsonian Institution’s collection of Jim Henson’s Muppets, and Bert and Ernie will have a place in history, too. Henson’s daughter, Cheryl Henson, is donating 20 more puppets and props to the National Museum of American History.

I'm pretty much okay with this.

Smithsonian magazine welcomed Miss Piggy, dressed in a silver evening gown and holding a red rose, with a photo shoot. The museum allowed her to pose with Dorothy’s ruby slippers from “The Wizard of Oz” and wearing the real 45-carat Hope Diamond from the National Museum of Natural History.

“She was very well-behaved, considering she wanted to take it home with her,” said Bonnie Erickson, who created the Miss Piggy puppet with Henson and now is executive director of the Jim Henson Legacy foundation.

The gift was made on what would have been Henson’s 77th birthday and shortly after his wife, Jane Henson, died in April.

Avik Roy Is At It Again

The official numbers on Obamacare premiums are in and they are better than predicted:

As for premiums, before tax credits kick in, they will average 16 percent below the Congressional Budget Office's original estimates for a silver-level plan (which covers 70 percent of costs). The number of insurers in a state is directly tied to how low premiums will be, Lambrew noted. Arizona, with an average of 106 plans to choose from, had the second-lowest average premiums for a 27-year-old adult: $166 a month. Wyoming, with an average of 16 plans, had the highest average premium at $342 a month.


Forbes's official mouthpiece for the Republican party propaganda on Obamacare, Avik Roy, has taken the Health and Human Services report on Obamacare premiums and turned it into this massive pack of cherry picked lies:

HOLY CRAP MY INSURANCE IS GOING TO DOUBLE no it's not, people.  Once again, Roy singles out a small slice of the population, in this case young men buying pre-Obamacare, catastrophic-only coverage that no longer meets criteria for minimum coverage standards, and says OH NO PREMIUMS WILL DOUBLE FOR ALL MEN.

It will not.  And the subsidies will make people who can't afford insurance have options.  Remember, Republicans did everything they could to ensure Red states didn't expand Medicaid coverage.  In these states, insurance premiums are higher than in Blue states that expanded Medicaid coverage.

You can blame Republicans for higher premiums.