Papa John's Pizza is based here in Kentucky (Louisville is home to both it and competitor Yum! Brands and Pizza Hut, go figure we're the capital of greasy food) and CEO and founder John Schnatter made headlines last week complaining that the pizza delivery chain's 2017 financial woes were directly the problem of people boycotting the NFL over Black Lives Matter and Colin Kaepernick.

Papa John's is reevaluating its NFL sponsorship after controversyinvolving players' protests during the national anthem engulfed the chain.

"If the viewership decline continues, we will need to shift into things that work more effectively for us," Papa John’s President and Chief Operating Officer Steve Ritchie told the Wall Street Journal on Friday.

On Wednesday, Papa John's CEO and founder John Schnatter slammed the NFL, blaming the league's "poor leadership" and declining ratings on the pizza chain's sales slump. According to Schnatter, controversy surrounding players' protests had played a role in ratings decline.


Makes sense, ratings are down, pizza sales are down, so it must be black peoples' fault!

The problem is Schnatter now has a much, much bigger issue on his hands: the neo-Nazis have latched onto him as not only the official pizza of the NFL, but the "official pizza of white supremacy".

Neo-Nazis and white supremacists have always been distasteful, but now it turns out their taste in pizza is terrible, too.

The white supremacist website the Daily Stormer announced Thursday that Papa John’s pizza is the official pie of the alt-right, posting a picture of a pizza with a swastika fashioned from pepperoni slices. The caption reads, "Papa John: Official pizza of the alt-right?"


That had Schnatter scrambling for clean-up over the weekend trying to desperately distance his pizza chain from actual Nazis.

But after the Nazi pizza fiasco, Papa Johns issued a clear message to neo-Nazis and other hate groups, warning them off their products.

Peter Collins, the senior director of public relations at Papa Johns, said in a statement: “We condemn racism in all forms and any and all hate groups that support it.”

“We do not want these individuals or groups to buy our pizza,” he added.

Papa Johns CEO John Schnatter’s comments about the NFL were widely criticized, after he suggested he would be pulling advertising from the league over the police brutality protests.

You don't get much more of a confirmation that your CEO's comments on Black Lives Matter protests in the NFL were stupidly racist than actual Nazis publicly agreeing with you and telling other Nazis to buy your company's product, guys.  That's pretty much the max level on that one.

I kind of feel a bit sorry for Peter Collins here, this is one hell of a shitshow and he's probably going to get fired because the guy he works for put out such a series of dog whistle racist comments that Nazis showed up to applaud it.  As a PR professional, that's about as bad as it gets.

By the way, I stopped eating Papa John's more than once every couple of months because there's much better pizza in Cincinnati, Schnatter's always been an asshole, and I used to work there in college so I know what goes in the pies.

The Fulcrum Crumbles In Riyadh, Con't

I talked earlier this week about the precipitous events in Saudi Arabia over the weekend as Crown Prince Mohammed bin Salman has locked down power in the kingdom by convincing his father, King Salman, to appoint him as head of an anti-corruption commission where he promptly took out dozens of his own family members in a coup.

Meanwhile, MBS is the man behind the Saudi military intervention in Yemen, which has now led to a larger humanitarian crisis than Syria by a factor of millions more displaced.  MBS is a religious and cultural moderate, but a massive military hawk and autocrat who sees himself as the benevolent leader that the Saudis must have to make it in a future without oil.  Saudi Arabia has already made moves on Qatar and Lebanon, blockading the former through a botched coup attempt and crushing the latter in a vice as that country's former PM resigned and fled to Riyadh over the weekend as well.

But MBS's true goal is to go after Iran, as this conflict is as old as the Shi'a/Sunni split is Islam. So far it's been a bloody proxy war.  But in the Trump era, that's turning into the distinct possibility of a more direct conflict.  Tuesday, Saudi Arabia upped the ante big time.

This "may be considered an act of war", state media quoted the prince as telling UK Foreign Secretary Boris Johnson in a telephone conversation.

On Saturday, a ballistic missile was intercepted near the Saudi capital.

Iran denies arming the Houthi movement, which has fought a Saudi-led coalition backing Yemen's government since 2015.

Houthi-aligned media reported that the rebels had fired a Burkan H2 ballistic missile at King Khaled International Airport, which is 850km (530 miles) from the Yemeni border and 11km north-east of Riyadh. Saudi missile defences intercepted the missile in flight, but some fragments fell inside the airport area.

Human Rights Watch said the launch of an indiscriminate missile at a predominantly civilian airport was an apparent war crime.


There's no doubt that both the Trump regime in Washington and the Netanyahu government in Israel, both rocked by domestic scandals, would want a welcome distraction backing the Saudis in a fight against Tehran.

The Lessons Of Tuesday Night 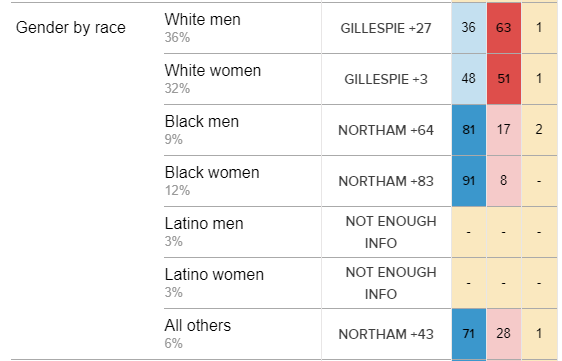 Gillespie won both white men and...surprise!...white women (Nobody should be surprised by this, actually.)  It wasn't women who gave Ralph Northam the win, it was women of color who gave him the win. Among white voters, who still made up two-thirds of voters last night, Gillespie had a cake walk and won going away.

Enough black voters turned out to not only stop Gillespie cold, but to pick up the seats they needed in order to, along with Northam's win and Democrat Justin Fairfax's win as the state's new black Lt. Governor, take control of the state's House of Delegates in a 50-50 split by picking up a whopping 16 seats.

Northam has about an 8.5% win.  That's pretty much the exact margin black women gave him overall.  Without black women, this is a tie race.  With them, Northam won easily.

The lesson is when black voters show up, Democrats win and win BIG. We know this. What I don't know why we're trying to worry about winning back white men who voted for Republicans by a 27 point margin.  Get more black votes out.  Fight voter suppression.  Jesus, it's not multi-variable calculus, guys.

Republicans know this lesson well and have been trying to disenfranchise black voters for decades exactly because they know black voters win election for Dems because we vote for Dems. Duh.

Why some Democrats still yet don't understand this, I'll never know.
Posted by Zandar Permalink 10:00:00 AM No comments:

Email ThisBlogThis!Share to TwitterShare to FacebookShare to Pinterest
StupidiTags(tm): EPIC WIN, Vote Like Your Country Depends On It