Last Call For The Last Map 326-212 if you switch Ohio and NC.  I would be pleasantly surprised if the Buckeye State didn't disappoint me.  It's possible Florida could go either way too but I have to hang my hat on something, and that's going to be the huge Latino early voter turnout in FL and NV.

Trump has no viable path to 270 if he loses both, he'd have to run the table on all the other swing states I named except for New Hampshire, and he's just not going to break the Virgnia/Colorado/Pennsylvania Clinton firewall and still lose Florida.  If he does, he wins outright and will win. Bigly, even.

Still, sticking with the above map, which is Obama 2012 minus OH and IA, but plus NC.

What about the Senate? 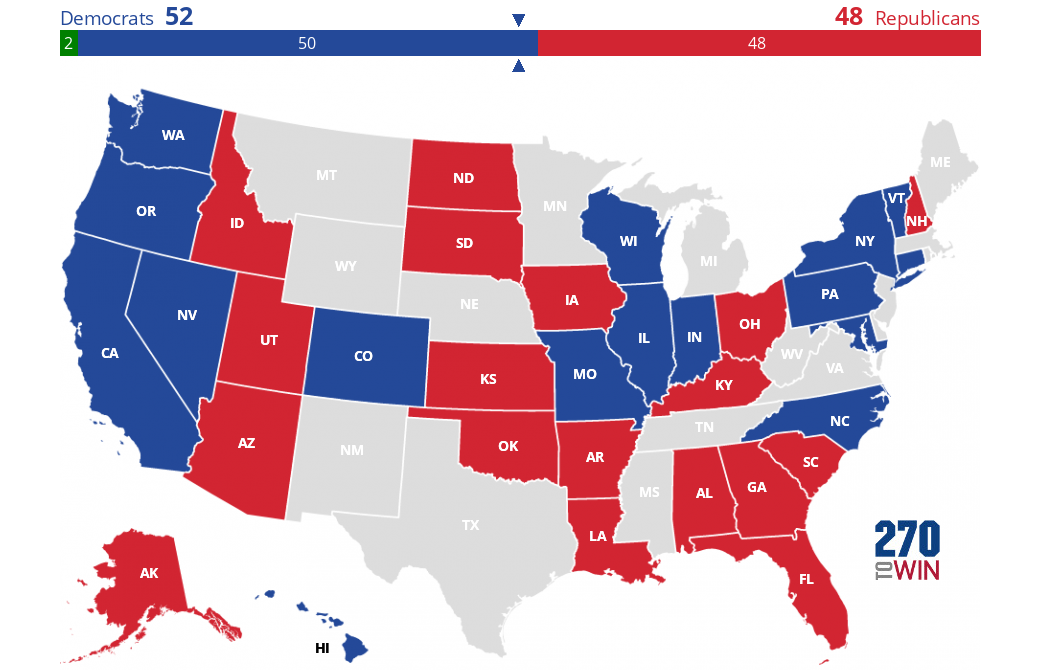 
I think Dems are going to get pickups in PA, WI, and IL for sure and defend Harry Reid's seat in NV, meaning they have to get at least one win in Missouri, Indiana, NC or NH. I think they'll get all but NH in this scenario, so 52-48 Dems.

Please vote tomorrow if you have not voted already.
Posted by Zandar Permalink 9:00:00 PM No comments:

The Big Winner Tomorrow Is...

“I never thought I’d see the day where illegal immigration was included in a presidential candidate’s top three issues,” Mr. Gilchrist, a supporter of Donald J. Trump, said. “For me personally, my mission has been accomplished.”

While Mr. Trump seems likely to lose the election, many of his most extreme supporters say they believe that they have already won. Whether the subject is immigration, military intervention, the news media or federal government corruption — and even the entire democratic process — their views, long thought to be well outside the political mainstream, have been given a voice inside it. And that voice belongs to the presidential nominee of a major political party.

Of course, Mr. Trump’s populist candidacy has energized ordinary Americans across the country who previously felt alienated from the political system, but it has also emboldened extremist groups that say he has validated their agendas.

It is unclear how much legitimacy these organizations can realistically expect to gain, given the extreme nature of their views to most Americans. But if they are able to maintain even a measure of influence on the right after the election, this could be Mr. Trump’s most enduring legacy.

“Trump has shown that our message is healthy, normal and organic — and millions of Americans agree with us,” said Matthew M. Heimbach, a co-founder of the Traditionalist Youth Network, a white nationalist group that claims to support the interests of working-class whites. It also advocates the separation of the races.

Whatever happens on Nov. 8, Mr. Trump’s candidacy has brought groups like Mr. Heimbach’s out of the shadows, and they say they have no intention of returning.

“For racists in this country, this campaign has been a complete affirmation of their fears, worries, dreams and hopes,” said Ryan Lenz, the editor of the Hatewatch blog at the Southern Poverty Law Center, which tracks such groups from its headquarters in Montgomery, Ala. “Most things they believe have been legitimized, or have been given the stamp of approval, by mainstream American politics to the point now where it’s no longer shameful to be a racist.”


And that ladies and gentlemen, is the true legacy of Trump and the GOP in 2016: Making Racism Acceptable Again.  Acceptable enough that 60 million people are going to vote for the guy tomorrow, minimum.

Not that it ever wasn't acceptable, mind you.  But Obama winning made them tired of covering for it, and that's why Trump won the primaries.

Remember the joke that anti-government Libertarians sure love to use public highways to drive to those rallies?  And you know, it gets even funnier because Libertarians have zero sense of humor and always respond with "Well, maybe if we had more toll roads and bridges, at least they would be paid for." Sure, that would essentially be a massive, regressive tax on the poorest Americans especially in places without public transportation, but it's not like anyone's actually going to do that to the federal highway system, right?

So do we want to take a guess at what Donald Trump's big infrastructure plan is?

Trump, as you might have noticed during this long, emotionally torturous campaign, likes to wax poetic about America's collapsing bridges and “third-world” airports, and he has vowed to fix up the country by doubling Hillary Clinton's proposed spending on infrastructure. At the same time, he’s also promised to pass gargantuan tax cuts while limiting the budget deficit.

This has all raised an obvious question: How, exactly, does America’s angriest clementine plan to pay for all of this building? I mean, Mexico isn't going to cover the wall and repairs to I-95, is it?

Thankfully, we now have an answer from two of Trump's chief economic advisers. In a report from Oct. 27, University of California–Irvine professor Peter Navarro and private equity honcho Wilbur Ross outlined how the candidate would transform about $167 billion of federal tax credits into $1 trillion of infrastructure spending. Factor in the effects of economic growth, they argued, and the cost to taxpayers would amount to zero, zilch, nada. Or, as they put it, the whole thing would be “budget neutral.”

Of course, it‘s not really free. Americans would just end up paying for the construction a bit later on.

Under Trump's plan—at least as it's written (more on that in a minute)—the federal government would offer tax credits to private investors interested in funding large infrastructure projects, who would put down some of their own money up front, then borrow the rest on the private bond markets. They would eventually earn their profits on the back end from usage fees, such as highway and bridge tolls (if they built a highway or bridge) or higher water rates (if they fixed up some water mains). So instead of paying for their new roads at tax time, Americans would pay for them during their daily commute. And of course, all these private developers would earn a nice return at the end of the day.


One of the big fights here in Cincinnati is over the Brent Spence bridge, which carries I-71/75 traffic across the Ohio River and is one of the busiest trucking bridges in the country.  Republicans really, really want to turn it into a private toll bridge because it would be a massive profit generator for whoever got the bid. Voters really, really want to throw out whoever votes for such a plan in either northern Kentucky or southwest Ohio.

Trump vowed to fix the bridge with this plan on Friday at his rally in Ohio.

Trump spoke at 4:30 p.m. Friday at Airborne Airpark, vowing to bring jobs back to America, rebuild inner cities and to keep the country safe from terrorism.

Trump did not announce how he planned to replace the Brent Spence or what he would do to cover those costs.


Of course not.  Those plans come later, after you've already fallen for the scam.
Posted by Zandar Permalink 10:00:00 AM No comments: