Paul Krugman talks about Owsley County, Kentucky to be precise.

National Review has an actually interesting report by Kevin Williamson on the state of Appalachia, providing a valuable portrait of the region’s woes — plus an account of how people turn food stamps fungible by converting them into soda. But the piece also has a moral: the big problem, it argues, is the way government aid creates dependency. It’s the Paul Ryan notion of the safety net as a “hammock” that makes life too easy for the poor.
But do the facts about Appalachia actually support this view? No, they don’t. Indeed, even the facts presented in the article don’t support it.

If you go looking for the catastrophe that laid this area low, you’ll eventually discover a terrifying story: Nothing happened.


But he almost immediately contradicts himself, noting that employment in eastern Kentucky has fallen with the decline of coal and what little manufacturing the area once had. True, there was no sudden moment when the town’s main employer closed up shop; it was a gradual process. But so what? The underlying story of Appalachia is in fact one of declining opportunity. Here’s the unemployment rate for Owsley county: 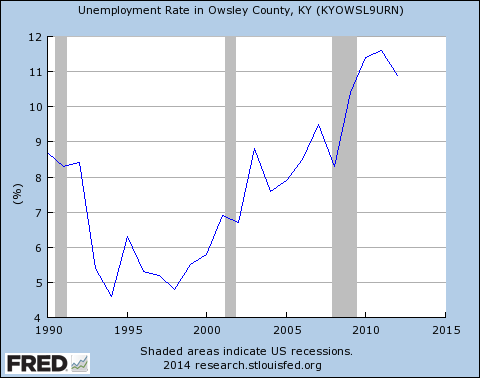 Is it any surprise that people have turned to food stamps?

Reminder:  the vast majority of Americans who recieve SNAP benefits and unemployment benefits, like nearly all forms of social assistance, are white.  It's folks in places like Owsley County who are poor, not just "inner city Detroit" and whatnot.

But hey, FOX News convinces folks to vote against this stuff, then blame "those people" when things keep getting worse.
Posted by Zandar Permalink 7:33:00 PM 2 comments:

Jumping Off That Bridge Too Far

He told everyone at his long, bizarre, rambling press conference on Thursday that he hadn't heard anything about the Fort Lee bridge closures until that day.

New Jersey Gov. Chris Christie complained in a phone call with New York Gov. Andrew Cuomo that a Port Authority official has been wading too deeply into controversial and potentially politically explosive lane closures on the George Washington Bridge, according to a report Thursday.

The issue involves bridge toll lanes in Fort Lee, N.J., that were cut from three to one in September, causing a massive traffic backups.

That article was from December 12 of last year, a month ago.

So why would he need to talk to Gov. Cuomo about this if there was nothing wrong, and nothing to cover up when the Port Authority was investigating why the closures happened?