On The Next Epidose Of NCIS

A dead sailor found off the coast of Cuba.  An affair with a base commander. A naval captain in disgrace.  Sometimes truth is stranger than fiction, folks.


On January 11, the body of Christopher Tur, was found in the waters off of Cuba. A subsequent investigation uncovered an alleged affair between Tur’s wife and Capt John R. Nettleton, the commander of the Navy base at Guantanamo Bay.

On January 21, the Navy publicly announced that Nettleton has been relieved of command.

Following his dismissal from Guantanamo, Nettleton was moved to Florida, where he is assigned to Jackson’s staff.


Sounds like this should be a movie (and probably will be.)

Base spokesperson Kelly Wirfel said that Tur moved to Guantanamo with his family in 2011 and worked at the base commissary. Tur’s obituary lists his job as a loss prevention officer, a title that typically means someone who prevents theft and shoplifting.. Tur’s widow, Lara, who is alleged to have carried on an affair with Capt. Nettleton, works as the director of the base’s Fleet and Family Services. That position would have her overseeing a variety of support programs for military families ranging from counseling services to financial assistance.

Lara reported her husband missing on January 10, a day before the Coast Guard discovered his body.


The adultery alone is enough to seriously ruin Nettleton's career under UCMJ, but with the other man in the picture dead, well...now things get really interesting.  Trust me when I say there are screenplays being written right now about this.

She's Always A Woman To Me

Just a reminder that while rampant, obvious racism is usually frowned upon by Republicans, rampant, obvious sexism is still widely acceptable and in fact is part and parcel of the GOP's anti-Hillary push. WaPo's Aaron Blake:

One WaPo-ABC poll question I didn't get into in this morning's post is this: Does the fact that Hillary Clinton would be the first female president make you more likely or less likely to vote for her in 2016?

Twenty four percent of people -- including 40 percent of Democrats and 29 percent of women -- say that breaking the last, highest glass ceiling makes them more likely to back her. Two-thirds say it doesn't matter one bit to their vote.

But if you look a little closer, you'll find something interesting: While most Republicans say Clinton's gender doesn't matter, about one-quarter of them (24 percent) say the fact that she would be the first female president makes them less likely to vote for her. Just 8 percent say it makes them more likely to back her. 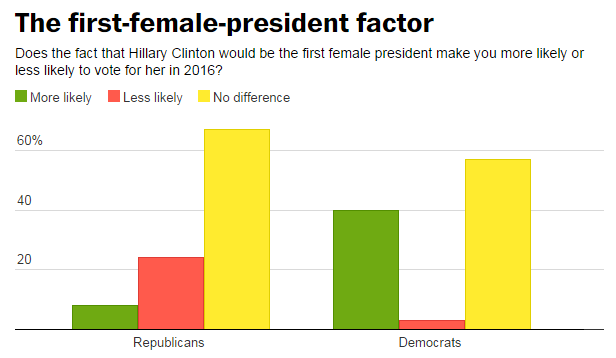 Nobody should really be surprised by this, other than I think the number of Republicans admitting this is probably lower than it really is.  And yes, Republicans have a huge issue with women of their own creation.  This week's abortion bill nonsense proved that.

A symbolic messaging bill to ban abortion after 20 weeks of pregnancy threw the party into disarray and was abruptly pulled at the last minute after a group of GOP women and swing-district lawmakers raised hackles over a rape-exception provision that required victims of sexual assault to report the crime to authorities before they could get an abortion.

"None of us saw it coming," Rep. Richard Hudson (R-NC) told reporters on Thursday.