Last Call For Flipping The Script On SCOTUS, Con't

Meanwhile in Washington, Senate Republicans are again saying that they will refuse to even consider any Obama nominee to replace Scalia.


Majority Leader Mitch McConnell (R-Ky.) told Obama what he’s been telling reporters and constituents: that the next occupant of the Oval Office should be the one to fill the court vacancy.“I told the president what I’ve been saying for close to two weeks now,” McConnell said.

The meeting was brief, providing another sign that neither side is backing down in the partisan battle over replacing the late Justice Antonin Scalia.

“We killed a lot of time talking about basketball,” Reid said.

The White House and Senate Democrats have ratcheted up the pressure on Grassley in recent days in hopes that he might be shamed into holding hearings. The Iowa senator controls the committee that oversees Supreme Court nominations.

But Grassley indicated he’s not going to budge. Instead, he offered a constitutional defense of the Senate’s decision to postpone the matter until 2017.

Grassley argued that Obama’s aggressive use of executive authority makes it virtually impossible for Republicans to put another one of the president’s nominees on the court, likely tipping its ideological balance.

“You believe you’ve got a pen and a phone and you can do certain things Congress won’t, and you’re looking for the court to back you up, and we just don’t agree with that,” he said.

Reid had a blunter take.


Obama has won time and again against these clods, so we'll see what happens after we can put a face to the nominee and a story behind them.

“They were adamant. They said, ‘No, we’re not going to do this at all,’ ” Reid told reporters on the West Wing driveway.

Greg Sargent goes over the two-front strategy Dems have for beating Trump in the general: going after Trump as woefully unfit for office, and appealing to those fed up with the system enough to consider voting for him.

All signs are that Donald Trump and Hillary Clinton are headed for smashing victories today in multiple primaries across the country that could very well put both on a clear path to the nominations of their respective parties. Which means it isn’t too early for Democrats to start seriously pondering how to handle Trump in the general election.

Today’s New York Times delivers the most comprehensive report yet on the evolving Dem strategy. It’s worth dividing the Dem approach into two categories: First, there are the attacks that are designed to tear Trump down in the eyes of core Dem constituencies (minorities, single women) and groups of gettable swing voters (suburbanites and college educated whites). This will rely heavily on attacking Trump’s temperament as unfit for the presidency and deeply dangerous on a global scale; highlighting Trump’s virulent xenophobia and degrading comments about immigrants, women, and Muslims; and his murky business dealings, which will be pressed into service to paint Trump as a scam artist who has fleeced working people.

You might call those the low-hanging-fruit attacks on Trump — the gimmes. After all, it’s easy to conclude Trump is a deeply toxic figure who would drive up turnout among core Dem groups in a huge way and dramatically alienate and frighten certain swing voters. That’s very likely to happen.

The second aspect of the thinking about Trump is, to my mind, more interesting and potentially very important. It is rooted in an effort to understand the actual sources of Trump’s appeal, which he has retained in spite of all of his visibly despicable character traits:

[Campaign manager Robby] Mook and his colleagues regard Mr. Trump as a wily, determined and indefatigable opponent who seems to be speaking to broad economic anxieties among Americans and to the widely held belief that traditional politicians are incapable of addressing those problems. Publicly, the Clinton operation is letting the Republicans slug it out. But privately, it and other Democrats are poring over polling data to understand the roots of Mr. Trump’s populist appeal….

Mrs. Clinton’s uneven performance with male voters so far, especially white men, could create an opening for Mr. Trump to attract Democrats and independents who are socially and culturally moderate and open to his call for a strong military, fearless foreign policy and businessman’s approach to the economy. Those voters could give him an edge in places like North Carolina, which Mr. Obama won in 2008. But Clinton advisers also worry about Ohio, Florida and Democratic-leaning states in presidential elections that Mr. Trump has vowed to contest, like Michigan, Pennsylvania and Wisconsin.

This is welcome news for those who don’t relish the idea of a Trump presidency. Initial reports suggested that Democrats were mostly planning to re-purpose the 2012 attacks on Mitt Romney, as a predatory capitalist, against Trump. But such an attack arguably would not be reckoning with the important differences between Romney and Trump, as well as the true sources of Trumpism’s success. Romney was running (mostly) as an economic technocrat who would spur a faster recovery where Obama failed, in hopes of winning a referendum on the incumbent’s sluggish economy. So Dems had to use Romney’s business career to viscerally undermine the notion that his approach to the economy — a call for “getting government out of the way” that Dems branded as “you’re on your own economics” — would actually help struggling Americans.


So yes, the Dems are definitely taking the notion of running against Trump in the general very seriously.  What I'm afraid of is Democrats starting to run against Obama and the people of color that make up the majority of the Democratic party in order to get angry Trumpbros to vote for them.  To her credit, Hillary has done a much better job of running with Obama than against him, Bernie not so much.

We'll see where all this settles out, but at least for now I'm operating on "running against Trump in November".
Posted by Zandar Permalink 4:00:00 PM No comments:

But He Makes The Yooge Trains Run On Time

A letter to the Financial Times from a couple in Indianapolis is raising eyebrows about why the wealthy and educated would vote for Trump. 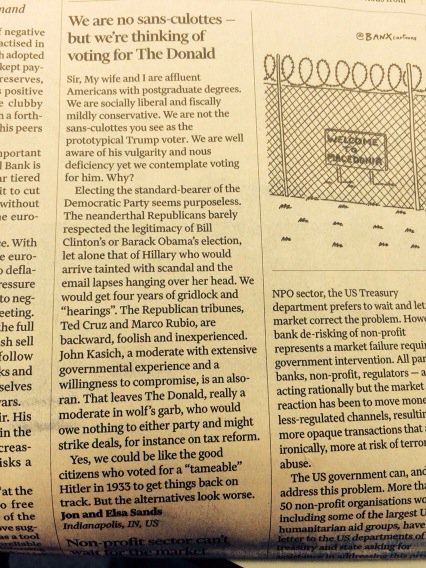 "Sir, My wife and I are affluent Americans with postgraduate degrees. We are socially liberal and fiscally mildly conservative. We are not the sans-culottes you see as the prototypical Trump voter. We are well aware of his vulgarity and nous deficiency yet we contemplate voting for him. Why?

Electing the standard-bearer of the Democratic Party seems purposeless. The neanderthal Republicans barely respected the legitimacy of Bill Clinton's or Barack Obama's election, let alone that of Hillary who would arrive tainted with scandal and the email lapses hanging over her head. We would get four years of gridlock and "hearings". The Republican tribunes, Ted Cruz and Marco Rubio, are backward, foolish, and inexperienced. John Kasich, a moderate with extensive governmental experience and a willingness to compromise, is an also-ran. That leaves The Donald, really a moderate in wolf's garb, who would owe nothing to either party and might strike deals, for instance on tax reform.

Yes, we cold be like the good citizens who voted for a "tameable" Hitler in 1933 to get things back on track. But the alternatives look worse."

Jon and Elsa Sands
Indianapolis, IN, US


Well then.  If you think that the Country Club wing of the GOP won't get behind Trump, remember:
So if you're expecting a large uprising of wealthy GOP moderates to resist Trump...naah.  He's one of them, and they're okay with that.
Posted by Zandar Permalink 10:00:00 AM No comments: