Meanwhile, here in Kentucky, nobody seems to know who a military convoy that rolled through Lexington on Sunday flying a "Trump" flag actually belonged to, and nobody's taking responsibility for it.  Yet.

Flying a large "Trump" flag, a mysterious convoy of military vehicles rolled down Interstate 65 through Louisville on Sunday morning. But nobody is claiming it.

A spokesman for Ft. Knox, Patrick Hodges, said it wasn't theirs.

A Defense Department spokesman, Maj. Jamie Davis, who examined images of the four-truck procession for the Courier-Journal, said he doesn't think it belonged to any service branch — and that the vehicles may have been military surplus.

Davis said it would violate regulations to fly such a flag on a military vehicle. “That is not standard procedure,” he said. He also said it would have been against the rules to run a military convoy without unit markings on the trucks.

Chris Rowzee, a spokeswoman for indivisibleky, a new activist organization in Louisville, said that as a retired veteran who served 28 years in the Air Force, “I can't even begin to describe how disturbed I am by this.”

While Donald Trump is president, she said, the military is supposed to be a nonpolitical organization in which servicemen and women swear an oath to the Constitution, not to any particular president.

“To show a partisan political leaning on a military vehicle is very reminiscent of Nazi Germany,” she said. 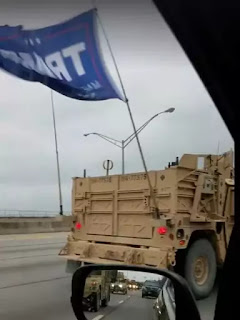 Invisibleky posted photos and a video of the convoy on its website. Rowzee said the group thinks the trucks may have belonged to a military contractor, if they weren't being operated by the military.


So yes, this actually happened.  Somebody decided it would be really cool to drive around several military trucks with at least one of them openly flying a Trump regime flag.  Every alarm bell in the universe ought to be ringing in your head at this one, guys.  We know Trump has his own security team separate from the US Secret Service and that our military and police have a real problem with white nationalists in the ranks.

This is the kind of thing that will become more prevalent.

By the way, can you imagine the national freakout if a military truck was ever spotted flying an Obama flag?
Posted by Zandar Permalink 9:26:00 PM No comments:

The Fight For SCOTUS

I'll believe this when I see them actually do it, but apparently Dems are going to try to call Mitch McConnell's bluff and will filibuster Trump's expected Supreme Court nominee this week.


Senate Democrats are going to try to bring down President Donald Trump's Supreme Court pick no matter who the president chooses to fill the current vacancy.

With Trump prepared to announce his nominee on Tuesday evening, Sen. Jeff Merkley (D-Ore.) said in an interview on Monday morning that he will filibuster any pick that is not Merrick Garland and that the vast majority of his caucus will oppose Trump’s nomination. That means Trump's nominee will need 60 votes to be confirmed by the Senate.

“This is a stolen seat. This is the first time a Senate majority has stolen a seat,” Merkley said in an interview. “We will use every lever in our power to stop this.”

It’s a move that will prompt a massive partisan battle over Trump’s nominee and could lead to an unraveling of the Senate rules if Merkley is able to get 41 Democrats to join him in a filibuster. Sen. Amy Klobuchar (D-Minn.) also reminded her Twitter followers on Sunday night that Supreme Court nominees can still be blocked by the Senate minority, unlike all other executive and judicial nominees.

Any senator can object to swift approval of a nominee and require a supermajority. Asked directly whether he would do that, Merkley replied: “I will definitely object to a simple majority” vote.

Merkley's party leader, Sen. Chuck Schumer of New York, has said he will fight "tooth and nail" any nominee who isn't "mainstream."


So the question is who cracks first here, the Dems or the Trump regime?  History tells us the Dems will probably be smashed into oblivion and will have folded by March 1, with Trump's nominee getting an easy confirmation vote before Tax Day.  The Dems folded on Samuel Alito and that was with the Christmas holiday, in a matter of three months.

I dearly hope I'm wrong, but Senate Dems continue to disappoint me at nearly every turn.
Posted by Zandar Permalink 4:00:00 PM No comments:

The Sinking Ship Of State, Con't

The Trump regime is discovering the problem with career State Department diplomats: they're pretty good writers with excellent skills of persuasion.

The current draft of the memo, which was obtained by the Lawfare blog, describes Trump's actions as "counterproductive" to its stated goal of protecting Americans from potential terrorist attacks. According to the memo, the order will instead exacerbate relations with the targeted countries.

The State Department confirmed the existence of the memo to Mother Jones on Monday.

"We are aware of a dissent channel message regarding the Executive Order titled 'Protecting the Nation from Foreign Terrorist Entry Into the United States,'" State Department spokesman Mark Toner said when reached for comment. "The Dissent Channel is a long-standing official vehicle for State Department employees to convey alternative views and perspectives on policy issues. This is an important process that the acting secretary, and the department as a whole, value and respect. It allows State employees to express divergent policy views candidly and privately to senior leadership."

The "dissent channel" was established in the 1970s for career diplomats to confidentially express opposition to the administration's foreign policy.

"We are better than this ban," the draft memo adds. "Looking beyond its effectiveness, this ban stands in opposition to the core American and constitutional values that we as federal employees took an oath to uphold."

The United States is a nation of immigrants, starting from its very origins. The concept that immigrants and foreigners are welcome is an essential element of our society, our government, and our foreign policy. So, too, is the concept that we are all equal under the law and that we as a nation abhor discrimination, whether it is based on race, religion, sex, or national origin. Combined together, that means we have a special obligation to maintain an immigration system that is as free as possible from discrimination, that does not have implied or actual religious tests, and that views individuals as individuals, not as part of stereotyped groups.

The Executive Order frames the ban as a 90-day suspension of entry for these nationals until their countries can set up arrangements to provide adequate information to determine that an individual seeking a benefit is who the individual claims to be and is not a security or public-safety threat. This is a high, vague, and nebulous bar. In some cases, the governments of these countries may be wholly incapable of providing this information; in others, the government may be unwilling. In either case, individual citizens will pay the price, a situation which runs counter to US. values of fair play and offering equal opportunities to all.


How long the State Department gets to keep its dissent channel, well that's really the question now, is it?

In all seriousness, this should be extraordinarily disturbing to folks.  State Department dissent channel stuff should be taken pretty seriously, it's there for a reason.  The Trump regime's official response?  If you don't like it, quit.

Asked about a memo signed by dozens of State Department diplomats opposing the temporary ban on refugees and citizens of seven Muslim-majority nations from entering the US, spokesman Sean Spicer encouraged the federal employees to "either get with the program or they can go."

"The president has a very clear vision. He's been clear on it since the campaign. He's been clear on it since taking office, that he's going to put this safety of this country first. He is going to implement things that are in the best interest of the safety of this country prospectively, not re-actively," Spicer said at the White House. "And if somebody has a problem with that agenda then that does call into question whether or not they should continue in that post or not."


Once again, dissent will not be tolerated in the Trump regime.