Last Call For The Religion Of Tolerance

Republicans continue their outreach to red state Muslims, and they're doing a literally unbelievable job of it.

A Republican state lawmaker in Texas is sending a message to her Muslim constituents: if they want to come calling at her Capitol office, they better pledge allegiance to the United States.

Newly-minted state Rep. Molly White (R) wrote Thursday in a Facebook post that she'd left an Israeli flag on the reception desk in her Austin office to mark the occasion of Texas Muslim Capitol Day. She said she also instructed her staff to "ask representatives from the Muslim community to renounce Islamic terrorist groups and publicly announce allegiance to America and our laws."

"We will see how long they stay in my office," White wrote. 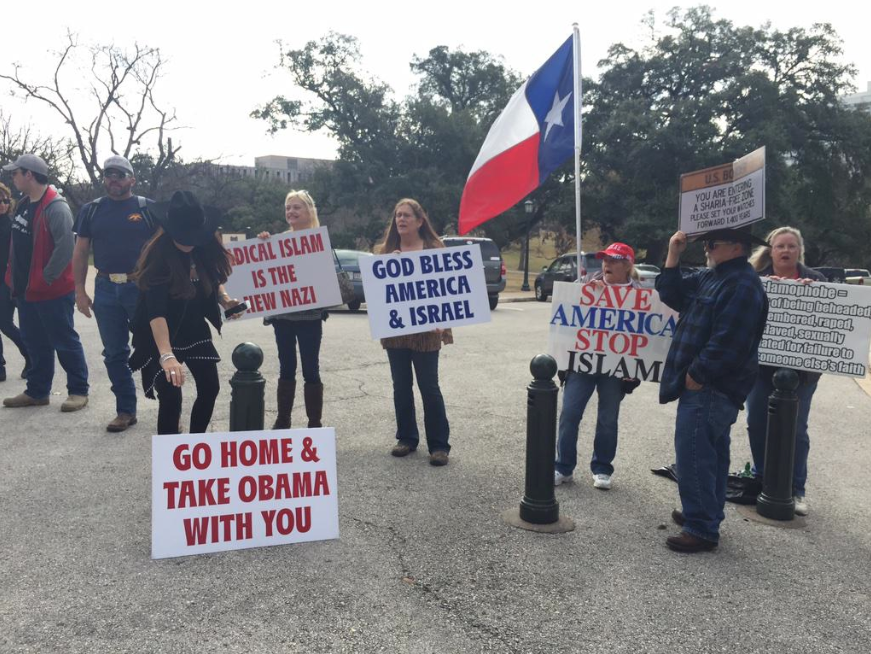 But remember, health care for poor people is liberal fascism.  Meanwhile, demanding loyalty oaths from citizens is just being a patriot.  I'm probably trying to silence her or something.
Posted by Zandar Permalink 9:35:00 PM 1 comment:

Email ThisBlogThis!Share to TwitterShare to FacebookShare to Pinterest
StupidiTags(tm): GOP Stupidity, I CANNOT WITH THESE GUYS, Religious Stupidity, Wingnut Stupidity


A white politician in Virginia reportedly addressed a black reporter as "boy" at a meeting on Monday, but then tried to backpedal quickly.

Augusta County Supervisor Tracy Pyles, an independent who has run for office as a Democrat in the past, was apparently critcizing reporter Calvin Trice, 43, of the Virginia News Leader newspaper when the offending remark took place.

"You got it wrong, boy — uh, son," Pyles told the reporter, according to the Virginia News Leader.

"That has bothered me," Pyles later told the paper. "It certainly came out, and then I went to 'son.'"

The News Leader reported that Trice, as well as others present at the briefing, were offended by the way Pyles addressed him.

"The context was obviously angry and that's a term that when its been used against me was a racial slur, a put down," Trice told his newspaper.

Pyles said it's just the way he talks, even to those who are dearest to him.


Black reporter reporting facts you don't like?  Hey, it's just the way the guy talks when you call him "boy" right?

You’ve heard of the racial wealth gap, the racial employment gap, and surely also about racial job callback disparities. Today, the Bureau of Labor Statistics offers an updated look at another dynamic of our racialized economy: the racial income gap.

The racial income gap is so pronounced that black workers with an advanced degree made $1,149—roughly the same as white workers who had only a bachelor’s degree ($1,132).


But if you work hard and educate yourself, you'll make it in America as a black person, right?

Oh, and starting with some college education, your average black employee earns less than your average woman.  And black and Hispanic women?  That is a national tragedy right there.

Even when we play by the rules we lose.

Barack And Bibi And Not Buddies

The Obama administration has been holding its tongue over Republicans inviting Israeli PM Benjamin Netanyahu to speak to Congress without informing the White House so far, but it looks like that period of silence has more or less ended with a bang.

The Obama administration, after days of mounting tension, signaled on Wednesday how angry it is with Israel that Prime Minister Benjamin Netanyahu accepted Republican leaders’ invitation to address Congress on Iran without consulting the White House.

The outrage the episode has incited within President Obama’s inner circle became clear in unusually sharp criticism by a senior administration official who said that the Israeli ambassador, Ron Dermer, who helped orchestrate the invitation, had repeatedly placed Mr. Netanyahu’s political fortunes above the relationship between Israel and the United States.

The official who made the comments to The New York Times would not be named, and the White House declined to comment. The remarks were the latest fallout after Mr. Dermer, without the White House’s knowledge, worked with House Speaker John A. Boehner to arrange the speech, which is scheduled for March.


If there is a head around here that's going to roll, it's going to be Ambassador Dermer's.

Mr. Dermer, an American-born former Republican political operative who is so close to Mr. Netanyahu that he is often called “Bibi’s brain,” became Israel’s envoy to the United States in 2013. White House officials were at first wary that Mr. Dermer would politicize relations between Washington and Jerusalem, but over time cultivated a working relationship with him after concluding that there were advantages in his closeness to Mr. Netanyahu.

The last week has borne out their initial concerns.

Mr. Dermer relayed the invitation to Mr. Netanyahu from Mr. Boehner, Republican of Ohio, without notifying top officials in Washington or Jerusalem. American and Israeli officials said that Mr. Dermer, in the course of a lengthy meeting with Secretary of State John Kerry just before Mr. Netanyahu’s speech was announced, never mentioned it.


Let's not forget that Dermer was one of Frank Luntz's boys back in the GOP's "Contract With America" days of Speaker Newt Gingrich.  He's a GOP operative through and through, and he decided that his loyalties to Israel and the GOP trumped all.

We'll see how this shakes out, but the crosshairs are definitely on Dermer's career right now should the White House decide to persona non grata his ass.  That however would be a major escalation on our part.

It may very well be warranted.
Posted by Zandar Permalink 10:00:00 AM No comments: