Last Call For...Oh, What's The Use

Matt Bevin is your new governor of Kentucky, folks.

Conway conceded defeat in an election night speech, saying "tonight was not the result that we had hoped for, but it is a result that we accept." Conway said he called Bevin and wished him well.

Bevin, a tea party favorite, has opposed the expansion of Medicaid in the state under the Affordable Care Act. Conway supports expansion of the program.

Bevin said he would replace the Medicaid expansion with another program by using a federal waiver. "Nobody's losing anything," Bevin told NBC News in an interview Monday.


He's lying, of course.  "Another program" means the end of Kynect, the end of Medicaid expansion, and 400,000 people now having to get a federal exchange plan from healthcare.gov next year.

And once the GOP finishes off the Dems in the KY House next year, Medicaid goes the way of Texas and Kansas here and becomes a block grant program, and even more people will be kicked off because they will no longer qualify.

These are the people that voted to wreck the state.  Maybe 14% of voters, because turnout was maybe 27%. 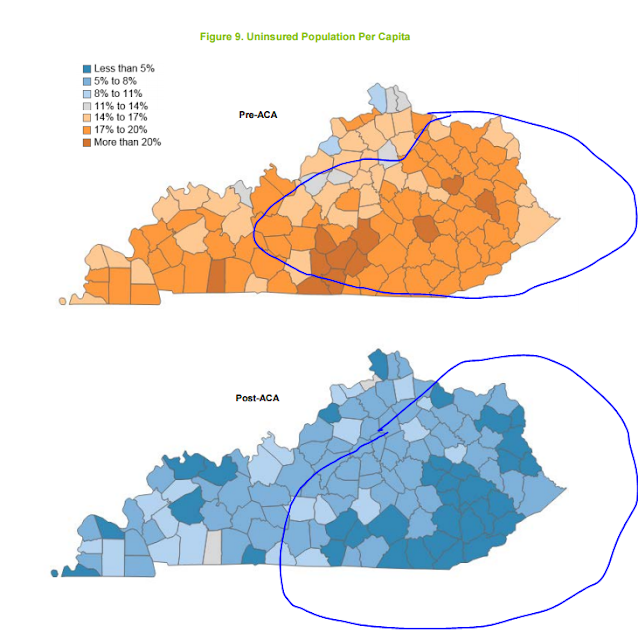 These are the counties that benefited from Medicaid expansion the most.  Some of them had 20% plus uninsured rates.  After Kynect, some of those same counties dropped to under 5% uninsured.

Most of these counties voted for Bevin, some of them, by 40-50%.  A few voted for Conway, and Louisville and Lexington.

Welcome to Bevinstan.
Posted by Zandar Permalink 9:33:00 PM No comments:

Fark.com founder Drew Curtis is running as an independent in today's gubernatorial race, and in a real sense I'm glad he is, because he's probably taking enough support from Matt Bevin to actually give Jack Conway the win.  Curtis's platform is pretty simple, he's running to prove that someday, America won't be a two-party system anymore.

Of course I never thought I’d found an irreverent news site called Fark.com, run it for 16 years and counting, write a book, fight off a patent troll, go to business school at age 38, and do dozens of other things. But even two years ago I would have considered myself the furthest thing from a politician.

Nevertheless [on Tuesday], when Kentucky voters head to the polls, they will see my name on the ballot, as an Independent candidate for governor.

My friends thought I was insane to do this—why take on a year’s worth of tedious work to fight for a job taking on problems that likely can’t be fixed? Well, like pretty much all of us, I feel like the political process isn’t representing our interests. A couple of parties dominate the process, limiting choice and grappling for power instead of trying to solve real problems. But at Fark, I have seen how effective the Internet can be at taking down entrenched gatekeepers and empowering regular people. So this year, I decided to see if I could harness that power toward changing politics.

I based my run on a theory: that the Internet and social media have finally made it possible for a third party candidate to win. Regardless of how things turn out, I’m convinced I was absolutely correct. And I’m also convinced you’ll see more candidates like me in the near future. As a matter of fact you should consider being one of them. To help you in your run, here are some lessons I’ve learned along the way.


Curtis's theory only works if you assume that there's a large pool of voters out there that want to be given a reason to vote and will vote if you give them that reason.  The reality is voters do not give a damn, don't really care about either party, and hate having to miss work on a Tuesday in order to cast a ballot.

But where Curtis is right is here:

But the problem is, the Democrats in particular really hate the other party’s candidate. Democrats may dislike their own candidate but they are downright terrified of the Republican. They are primarily voting to keep him out of office, and that makes them unlikely to take a flier on a third-party candidate; they’d rather pick the second-best candidate than vote for me. Meanwhile, I’ve been picking up GOP support no problem because they don’t seem as afraid. That tells me that if the GOP candidate had been more adequate, I’d have pulled this off.


And he's right.  If Matt Bevin hadn't won the primary, Curtis would have had a chance.  He would have been pulling 15, 20 in June, which would have put him in the debates. and would have had a non-trivial shot in a three way race between two meh candidates.

As it is Kentucky just wants to keep Matt Bevin out of Frankfort before he torches the joint.  If the GOP had nominated somebody close to Conway rather than a nutjob like Bevin, yeah, I probably would have strongly considered voting for Curtis.

I remember when Jesse Ventura won the governor's race in Minnesota. It can happen.
Posted by Zandar Permalink 4:00:00 PM No comments:

Time to head out to the polls, Kentucky.  We've got a governor to elect, as well as multiple state offices, and your choices for chief executive in Frankfort boil down to AG Jack Conway, and Matt Bevin, who has an interesting relationship with reality.

Republican Matt Bevin and Democrat Jack Conway continued their sprint to the finish line in Tuesday’s gubernatorial election as they campaigned in different parts of the state Saturday in an effort to get voters to the polls in a race that appears so close it will be decided by turnout.

Campaigning in Northern Kentucky, Bevin told groups of 30 to 50 people in Boone, Kenton and Campbell counties that his latest poll shows that he has grabbed a slim point advantage despite most public polls showing Conway with a 5 percentage point lead.

"The momentum has shifted. The gap has been closed," Bevin told his core backers at the Boone County Republican Party headquarters. "We're actually up a point as of yesterday."

Bevin, who declined to release details of his tracking polls, traveled the region with 4th District Congressman Thomas Massie in an effort to rally Republican troops.

Conway, showing similar confidence as he campaigned east of Lexington, told crowds that their vote is a choice between the “mainstream and the extreme” and he, too, predicted a win on Tuesday.

Told of Bevin’s claim that he had taken the lead, Conway said his internal polls show him up by more than five points and then added, “It wouldn’t be the first time (Bevin) didn’t tell the truth.”


Bevin has lied the entire campaign about wanting to get rid of Medicaid expansion.  It's right here in his "Bevin Blueprint" for Kentucky. right there at the top of page 10.

I mean, I don't know what else you can say about it.  He flat out says it "should be repealed".  There's nothing in there about any transition, any help for the 450,000 added to Medicaid under the expansion and the thousands more getting insurance through Kynect, he just closes Kynect and puts Kentucky on the federal health insurance exchange.  That's his plan.

Nearly half a million people would lose their health insurance, point blank.  It's in Bevin's own position paper, guys.  It's his stated policy, right there, verbatim.

Oh, and the rest of the Bevin Blueprint is a disaster: ending unions in the state, cutting thousands of state employee jobs, ending state pensions, shifting education dollars to private, charter and home schools and ending state education standards, and massive tax cuts for the rich and for businesses and expecting Laffer Curve unicorns to make up the lost revenue, just like in Kansas.

Oh, and he ends with refusing to enforce federal laws and regulations he doesn't agree with. Nullification uber alles!

Time to vote, Kentuckians.  You've got a choice to make: Conway, or this recipe for economic and austerity disaster that will burn the state to the ground.

John Oliver explains today's election, with the help of a pangolin.

Voters take to the polls today to elect governors in Kentucky and Mississippi, and Ohio will vote on two ballot measures, one legalizing recreational marijuana and establishing 10 growing sites to produce it commercially, and a second ballot measure that would nullify the first and declare the growing site plan an illegal monopoly.

If you're in Ohio or Kentucky, get out there and vote.

Remember, there are most likely local measures on the ballot where you live too.  Go vote!
Posted by Zandar Permalink 7:00:00 AM No comments:

Email ThisBlogThis!Share to TwitterShare to FacebookShare to Pinterest
StupidiTags(tm): StupidiNews, Vote Like Your Country Depends On It
Newer Posts Older Posts Home
Subscribe to: Posts (Atom)