Last Call For Do You Know Who My Dad Is?

Glenn Youngkin may have won the Virginia gubernatorial race (and you notice that Terry McAuliffe isn't screeching about "election fraud" or anything) and the Beltway Pundits will tell you that Youngkin won because of angry parents.

The problem is we know exactly how Republicans handle parenting because Youngkin's 17-year-old son tried to commit voting fraud in order to vote for his dad and was turned away.

The 17-year-old son of Virginia Gov.-elect Glenn Youngkin (R) tried to cast a ballot in Tuesday’s gubernatorial election twice despite being too young to vote, Fairfax County officials said in a statement released Friday.

The statement, which identified the teen as Youngkin’s 17-year-old son, emphasized that he did not end up voting and stated that he did not violate any state election laws. The Washington Post is not including the teen’s first name because he is a juvenile and has not been charged with a crime.

The teen walked into the voting precinct inside the Great Falls Library on Tuesday afternoon, presenting his driver’s license to election officials when asked for a proof of identity, according to Jennifer Chanty, the precinct captain there.

Chanty said in an interview with The Post that she realized who the teen was when she looked at his ID. Upon seeing his age, she said she informed him that he must be at least 18 to be eligible to vote in Virginia.

She said she offered to register him to vote for the next election, but the teen declined and walked out.

About 20 minutes later, the teen returned, insisting that he be allowed to vote, saying that a friend who was also 17 had been allowed to cast a ballot, Chanty said.

“I told him, ‘I don’t know what occurred with your friend, but you are not registered to vote today. You’re welcome to register, but you will not be voting today,’ ” Chanty, a Democrat, recalled saying.

Devin O’Malley, a spokesman for Youngkin, issued a statement Friday.

““It’s unfortunate that while Glenn attempts to unite the Commonwealth around his positive message of better schools, safer streets, a lower cost of living, and more jobs, his political opponents — mad that they suffered historic losses this year — are pitching opposition research on a 17-year old kid who honestly misunderstood Virginia election law and simply asked polling officials if he was eligible to vote; when informed he was not, he went to school,” O’Malley wrote.

You don't get to play the "innocent mistake" card when you were told no the first time and tried to come back and insist that you could vote the second time because "somebody else did it!" That's entitled "But I'm rich and my dad's important!" bullshit.
Especially when Republicans have been screaming about ZERO TOLERANCE for WIDESPREAD VOTER FRAUD and whaddya know, it's nearly always Republicans actually committing fraud.
Jerk.
Posted by Zandar Permalink 10:28:00 PM No comments:

Another home run month for the labor economy as the Biden administration continues to rapidly dig out of the Trump Depression hole that cost us 22 million jobs. 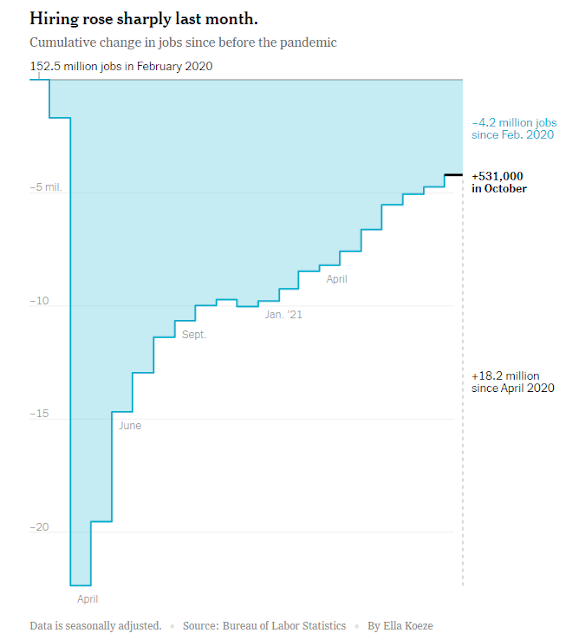 The American economy added 531,000 jobs in October, the Labor Department said Friday, a sharp rebound from the previous month and a sign that employers are feeling more optimistic as the latest coronavirus surge eases.

Economists polled by Bloomberg had been looking for a gain of 450,000 jobs. The unemployment rate declined to 4.6 percent, from 4.8 percent.

The October gain was an improvement from the 312,000 positions added in September — a number that was revised upward on Friday, along with the August figure, providing a more upbeat picture of the last few months.

The increase in employment was broad, with sizable gains at restaurants and bars, as well as in factories and offices. And in another sign that conditions are gradually returning to normal, the proportion of employed people who worked remotely at some point last month fell to 11.6 percent from 13.2 percent.

“This was a strong employment report that shows the resilience of the labor market recovery from the pandemic,” said Scott Anderson, chief economist at Bank of the West in San Francisco. “I think we will see a pretty strong bounce back in economic growth in the fourth quarter.”

Hiring has seesawed this year along with the pandemic, especially in vulnerable sectors like hospitality and retail, where workers must deal face to face with customers. White-collar employees have fared better, because many can work remotely.

Some employers are complaining of a shortage of workers, as many people remain on the sidelines of the job market. The labor force participation rate — the share of the working-age population employed or looking for a job — was flat in October, at 61.6 percent, and up slightly among those 25 to 54.

The stubbornly low participation rate underscores the damage the pandemic has done to the economy, and why it will take time to recover, despite strong months like October.

Still, even with the lower workforce participation numbers, we'll climb out of the hole next summer. Rememeber, the Trump regime's "recovery" stalled out last winter when we were still ten million jobs in the hole. It's Biden's policies that got us more than halfway out from there in just 9 months.

Give it another nine months and we'll be back in business, hopefully after today's infrastructure plan vote in the House.

Meanwhile, the time bomb that the Trump regime left in the Justice Department in the form of the Durham "investigation" just exploded.

Federal authorities on Thursday arrested an analyst who in 2016 gathered leads about possible links between Donald J. Trump and Russia for what turned out to be Democratic-funded opposition research, according to people familiar with the matter.

The arrest of the analyst, Igor Danchenko, is part of the special counsel inquiry led by John H. Durham, who was appointed by the Trump administration to scrutinize the Russia investigation for any wrongdoing, the people said.

Mr. Danchenko, was the primary researcher of the so-called Steele dossier, a compendium of rumors and unproven assertions suggesting that Mr. Trump and his 2016 campaign were compromised by and conspiring with Russian intelligence officials in Moscow’s covert operation to help him defeat Hillary Clinton.

The people familiar with the matter spoke on condition of anonymity because the indictment of Mr. Danchenko had yet to be unsealed. A spokesman for Mr. Durham did not respond to a request for comment.

Some claims from the Steele dosser made their way into an F.B.I. wiretap application targeting a former Trump campaign adviser in October 2016. Other portions of it — particularly a salacious claim about a purported sex tape — caused a political and media firestorm when Buzzfeed published the materials in January 2017, shortly before Mr. Trump was sworn in.

The interview suggested that aspects of the dossier were misleading: Mr. Steele left unclear that much of the material was thirdhand information, and some of what Mr. Danchenko — who was born in Russia but lives in the United States — had relayed was more speculative than the dossier implied.

A 2019 investigation by the Justice Department’s inspector general sharply criticized the F.B.I. for continuing to cite material from the dossier after the bureau interviewed Mr. Danchenko without alerting judges that some of what he said had cast doubt on the contents of the dossier.

The inspector general report also said that a decade earlier, when Mr. Danchenko worked for the Brookings Institution, a prominent Washington think-tank, he had been the subject of a counterintelligence investigation into whether he was a Russian agent.

In an interview with The New York Times in 2020, Mr. Danchenko defended the integrity of his work, saying he had been tasked to gather “raw intelligence” and was simply passing it on to Mr. Steele. Mr. Danchenko — who made his name as a Russia analyst by exposing indications that the dissertation of President Vladimir V. Putin of Russia contained plagiarized material — also denied being a Russian agent.

“I’ve never been a Russian agent,” Mr. Danchenko said. “It is ridiculous to suggest that. This, I think, it’s slander.”

Mr. Steele’s efforts were part of opposition research that Democrats were indirectly funding by the time the 2016 general election took shape. Mr. Steele’s business intelligence firm was a subcontractor to another research firm, Fusion G.P.S., which in turn had been hired by the Perkins Coie law firm, which was working for the Hillary Clinton campaign.

Mr. Danchenko said he did not know who Mr. Steele’s client was at the time and considered himself a nonpartisan analyst and researcher.

Mr. Durham has been known to be interested in Mr. Danchenko and the Steele dossier saga. In February, he used a subpoena to obtain old personnel files and other documents related to Mr. Danchenko from the Brookings Institution, where Mr. Danchenko had worked from 2005 until 2010.

The charges against Mr. Danchenko follow Mr. Durham’s indictment in September of a cybersecurity lawyer, Michael Sussmann, which accused him of lying to the F.B.I. about who he was working for when he brought concerns about possible Trump-Russia links to the bureau in September 2016.

The NY Times at least makes it clear what Durham's goal is: to pin Trump's actual ties to the Russian mob and the actual crimes they committed on Hillary Clinton's campaign as a Russian disinfo operation.  The best part is that it's entirely possible that ol' KGB Vlad played both sides of the record at the same time, helping Trump and leaving the "too good to be true" Steele Dossier where the Clinton team would eventually find it.
We'll see where this all goes.
Posted by Zandar Permalink 10:00:00 AM No comments: