Last Call For Do Fear The Reaper

At this point, openly choosing to not take the vaccine really does have consequences, and it's time that more people learned exactly what the stakes are.

Dr. Brytney Cobia said Monday that all but one of her COVID patients in Alabama did not receive the vaccine. The vaccinated patient, she said, just needed a little oxygen and is expected to fully recover. Some of the others are dying.

“I’m admitting young healthy people to the hospital with very serious COVID infections,” wrote Cobia, a hospitalist at Grandview Medical Center in Birmingham, in an emotional Facebook post Sunday. “One of the last things they do before they’re intubated is beg me for the vaccine. I hold their hand and tell them that I’m sorry, but it’s too late.”

Three COVID-19 vaccines have been widely available in Alabama for months now, yet the state is last in the nation in vaccination rate, with only 33.7 percent of the population fully vaccinated. COVID-19 case numbers and hospitalizations are surging yet again due to the more contagious Delta variant of the virus and Alabama’s low vaccination rate.

For the first year and a half of the pandemic, Cobia and hundreds of other Alabama physicians caring for critically ill COVID-19 patients worked themselves to the bone trying to save as many as possible.

In the United States, COVID is now a pandemic of the unvaccinated, according to the head of the U.S. Centers for Disease Control and Prevention. In Alabama, state officials report 94% of COVID hospital patients and 96% of Alabamians who have died of COVID since April were not fully vaccinated.

“A few days later when I call time of death,” continued Cobia on Facebook, “I hug their family members and I tell them the best way to honor their loved one is to go get vaccinated and encourage everyone they know to do the same.”

More than 11,400 Alabamians have died of COVID so far, but midway through 2021, caring for COVID patients is a different story than it was in the beginning. Cobia said it’s different mentally and emotionally to care for someone who could have prevented their disease but chose not to.

“You kind of go into it thinking, ‘Okay, I’m not going to feel bad for this person, because they make their own choice,’” Cobia said. “But then you actually see them, you see them face to face, and it really changes your whole perspective, because they’re still just a person that thinks that they made the best decision that they could with the information that they have, and all the misinformation that’s out there.

America still has questions about the January 6th terrorist insurrection, and the majority of us expect Congress to get us some damn answers, which ostensibly is a problem for the GOP.

With Congress' January 6 Select Committee slated to start work soon, Americans still overwhelmingly disapprove of the events they witnessed that day, a sentiment that includes big majorities of both Republicans and of former President Trump's voters, too — and most do think there's more to learn about it. But beyond that larger sentiment, not everyone describes what happened the same way.

A majority of Americans still specifically call what happened that day an "insurrection" and an attempted overthrow of the government. This is where most Democrats and independents land. But roughly one-third of the country call it patriotism, or defending freedom, even though some of them nonetheless disapprove of the attack itself. And on those descriptors, we see divides within the GOP. 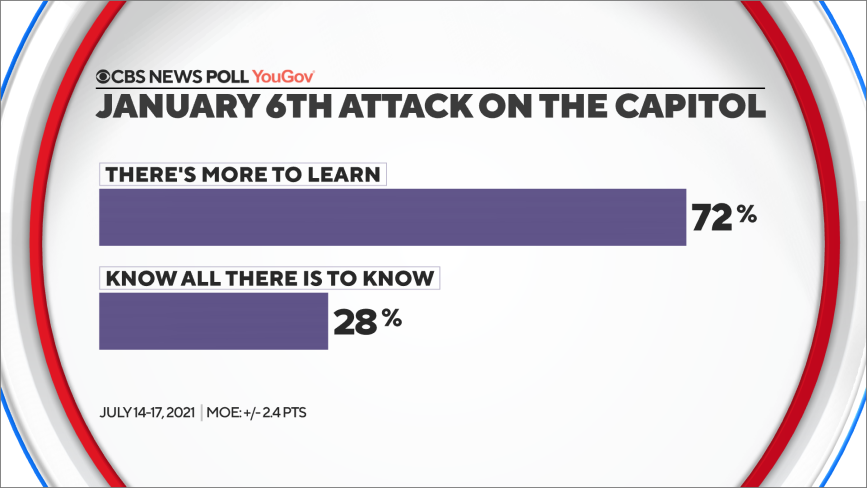 This may be worth watching: among Republicans, there is some shifting sentiment as they disapprove, though not quite as strongly as they used to. This less intense disapproval, among some in the Republican base, comes perhaps on the heels of recent comments about the day from former President Trump and others.

Here's the thing though: "There's more to learn" in this case to the GOP clearly means "goofball right-wing conspiracy theories must be investigated and given equal importance", and that's where Kevin McCarthy's merry band of assholes comes in.

House Minority Leader Kevin McCarthy has made his selection of five Republicans to join the select committee investigating January 6, ensuring that Republicans will have input in the investigation run by Democrats.

Republican Reps. Jim Banks of Indiana, Jim Jordan of Ohio, Rodney Davis of Illinois, Kelly Armstrong of North Dakota and freshman Troy Nehls of Texas have been selected by McCarthy, the minority leader confirmed to CNN. The group of House Republicans who were named to the select committee huddled in McCarthy's office for a meeting on Monday evening.

When asked how he arrived at his selections, McCarthy said he carefully chose a mix of members who represent a wide swath of views inside the House GOP conference and can each bring a different area of expertise to the table because of their past jobs or current committee assignments.

Please note the "microcosm of the conference" here are all white men from the Midwest, three of the five (Jordan, Banks, and Nehls) who voted to make Trump dictator on January 6th. Rod Davis is the one Republican in that group that actually voted for the January 6th Committee.

But let's be real about what the goal here is:

When asked by CNN what Republicans want to accomplish on the select committee, Jordan attacked Democrats: "You know what this is about. This is about going after President Trump. The Democrats don't want to talk about anything else."

Banks was selected to be the ranking Republican on the committee and is also the head of the Republican Study Committee, the largest conservative caucus in the House.

In a statement, Banks confirmed that he had accepted McCarthy's appointment, but outlined his concerns with the scope of the committee, framing it as an effort by Democrats "to malign conservatives and to justify the Left's authoritarian agenda."

"I have accepted Leader McCarthy's appointment to this committee because we need leaders who will force the Democrats and the media to answer questions so far ignored. Among them, why was the Capitol unprepared and vulnerable to attack on January 6?" Banks asked.

The goal was always to muddy the water and produce ignoble headlines like "Dems, GOP Clash On January 6th Committee" for several weeks, and America tunes the arguing out.
Pelosi knows this, so she told Jordan and Banks to piss off.
McCarthy has now pulled all Republicans from the committee and vows that he'll keep it from going forward.
The fact that Jordan, who should be a potential witness called to answer for his role in the insurrection, was chosen the committee signals very clearly that the GOP is going to do its dead level best to cover up the mess here, and America will just shrug and go back to watching reruns of Judge Judy.
Republicans don't want answers. They want the Big Lie.
Posted by Zandar Permalink 4:00:00 PM No comments:

Arizona Democratic Sen. Krysten Sinema is in real trouble with her party if she doesn't change her tune on the filibuster, at least according to a new poll in Mother Jones.

Sen. Kyrsten Sinema’s support for the Senate filibuster appears to be doing real damage to her political brand back home. The first-term Arizona Democrat has often defended the Senate’s 60-vote supermajority requirement as a necessary check on partisan whiplash, arguing that it forces the chamber to put together “durable” coalitions. But according to a new survey shared with Mother Jones from the progressive polling and policy firm Data for Progress, her stance has left her far less popular in Arizona than either President Joe Biden or her recently elected Senate colleague, Mark Kelly—and perhaps even vulnerable to a primary challenge.

According to the survey, which was conducted from June 28 to July 6th, Sinema is viewed favorably by 38 percent of voters, compared to 47 percent for Kelly and 51 percent for Biden—all of whom were elected in recent years by similar margins to Sinema. (Republican Gov. Doug Ducey’s favorability sits at 44 percent.) The numbers are more stark when you look at the partisan breakdown. Sinema is viewed favorably by just 42 percent of Democrats (with 39 percent viewing her unfavorably), while Kelly, who was elected narrowly last fall, is at 75 percent favorability with just 17 percent viewing him unfavorably. Biden? He’s doing just fine according to Arizona Democrats, with 95 percent viewing him positively.


Beyond the toplines, though, there are some ominous numbers for Sinema’s long-term standing back home. Democratic voters overwhelmingly support a $15 minimum wage according the survey; Sinema drew the ire of activists this spring for casting a largely symbolic vote against adding such a minimum-wage hike to the coronavirus stimulus package. They support getting rid of the legislative filibuster and overwhelmingly back the PRO Act, which would expand rights and protections for labor unions, but which Sinema has not signed onto.

After voters were read a script linking the filibuster to Republican obstruction, 66 percent of Democrats said that if given the chance in a 2024 Senate primary, they would “vote for a different candidate who would get rid of the filibuster.”

There’s one silver lining in all these numbers for Sinema. The poll also indicates she’s far more popular among Republicans than either Kelly or Biden. More than twice as popular, in fact. And this isn’t the first recent poll to pick up on such a divide. Another Arizona survey last month—this time of registered voters—showed a similarly stark gap. That survey, from pollster Bendixen & Amandi, found that while Kelly, like Biden, was overwhelmingly popular among Democrats and overwhelmingly unpopular among Republicans, Sinema’s numbers among the two parties were almost identical: She was viewed favorably by 52 percent of Democrats and 51 percent of Republicans.

Being underwater with your own party, but preferred by Republicans, well...
Let's just say if I were an Arizona Democrat, I'd be looking at a possible primary challenge to Sinema. We'll see how she reacts to this. You can't stay in office very long if you lose a primary.
Posted by Zandar Permalink 10:00:00 AM No comments: