With Congress's approval ratings in the single digits and 2013 being the least productive legislative year in modern history, House Republicans are claiming total victory in stopping President Obama.

While House Republicans have pinned the blame for Congress’ anemic legislative output on Senate Democrats, they make no bones about their efforts to blunt Obama’s rulemaking power.

“We’re left with no choice,” said Rep. Jason Chaffetz (R-Utah). “The president can’t just go it alone, that’s not who we are as a country.”

In interviews with The Hill, several House Republicans claimed momentum in the messaging battle over federal regulations, which they’ve portrayed as too overbearing and expensive under the Obama administration.

The conference has sought to put the president’s rulemaking agenda on trial in dozens of hearings convened in 2013 by Republican committee and subcommittee leaders.

Lawmakers have taken aim at everything from new limits on the hours that truck drivers can spend behind the wheel to draft standards for the amount of pollution that can spew from power plants. They've also sought to highlight the cumulative effects of regulations on the private sector.

“I think it’s been made more visible,” Rep. Scott DesJarlais (R-Tenn.) said. “And I do think we will continue to push because I think it’s vital to our small businesses and our industry in this country that we are successful.”


Of course 8 years ago, these same Republicans believed in the plenary nature of the Executive and believed it had nearly unlimited power, too, when Bush was in charge.  Now it's their sworn patriotic and Constitutional duty to oppose everything.

Funny how that works.
Posted by Zandar Permalink 9:15:00 PM No comments:

Sen. Rand Paul believes there's all kinds of extra jobs openings out there, so if we kick people off extended unemployment, these lazy slobs will be forced to take them.

Democratic attempts to extend unemployment benefits for 1.3 million workers were a "disservice" to the unemployed, Sen. Rand Paul said Sunday.

"I support unemployment benefits for the 28 weeks they're paid for," the Kentucky Republican said on "Fox News Sunday." "If you extend it beyond that, you do a disservice to these workers."

Paul said a study had shown employers were less likely to hire the long-term unemployed like those who have been on 99 weeks of benefits.


In other words, Rand Paul has decided that the problem is "the longer you're unemployed, the less chance you have at getting hired"  which is correct, and the solution is "cut everyone off at 28 weeks so they go get jobs", which is pure stupidity.   It's a bit like saying "the longer a building is abandoned, the more likely it is to catch on fire or become home to criminals" which is correct, and then saying the solution is "Let's cut fire and police departments so people will be less likely to abandon buildings because they know bad things will happen" which is again, pure stupidity. 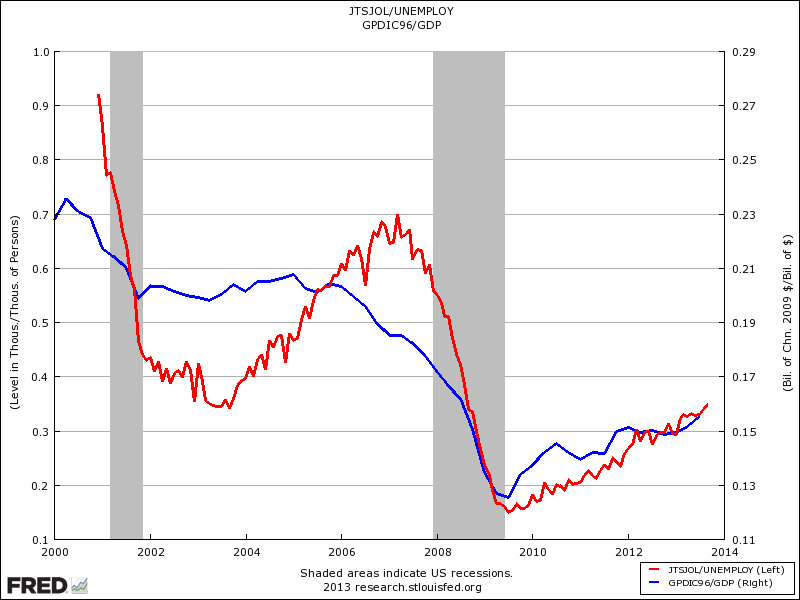 The blue line shows total private investment as a share of GDP. This investment remains very low by recent standards, and without investment new jobs won't be created.

We need that investment, rather than maximizing shareholder profit.  But that would make sense.
Posted by Zandar Permalink 4:14:00 PM No comments: