Republicans making more friends on MLK Day, this time in Florida.  From the Tampa Bay Times:

As Americans honored the memory of Dr. Martin Luther King Jr. on Monday, a Republican candidate for Florida House District 68 said President Barack Obama should be hanged for war crimes.

"I'm past impeachment," Joshua Black wrote on Twitter. "It's time to arrest and hang him high."


Yes, because a Republican candidate calling for the hanging of the nation's first black President on MLK Day is an excellent way to make African-Americans think Republicans aren't a bunch of racist assholes.  Good job, Josh!

Hours after the tweet, Black defended his comment. Obama should be held responsible for ordering a drone strike that killed a U.S. citizen overseas, he said.

"He should be executed for treason," Black said. "I think the appropriate punishment is death. They killed Benedict Arnold. (Obama) shouldn't be allowed to kill Americans without a trial."

The political newcomer said he doesn't fear U.S. Secret Service agents showing up on his doorstep. Many voters might agree with his position, he said, adding: "I guess they're going to call me a racist now."


Well, yes.  You're right, I am going to call you a racist.  So that makes Mr. Black here the victim.  And the part where "many voters might agree" with him?  That's the problem with the GOP right there.  By the way, Joshua Black is actually, well, black.  A gentle reminder that black folk can be awful, racist bigots too.

It seems like a complete no-brainer, but today's 9th Circuit ruling is a major victory for equality, and the court found that potential jurors in a case cannot be dismissed based on sexual orientation or preference.  BuzzFeed's Chris Geidner:


The 9th Circuit Court of Appeals, in a unanimous decision, held that discrimination based on sexual orientation is subject to heightened scrutiny — a decision the court concluded has been made in action, though not in word, by the Supreme Court itself.

In describing the reason for applying the new standard, Judge Stephen Reinhardt examined the Supreme Court’s June decision in Edith Windsor’s case challenging the Defense of Marriage Act. Although equal protection claims brought based on sexual orientation have previously been judged under the lowest level of review, called rational basis, the 9th Circuit held that a higher standard now applies.

Under that heightened scrutiny, in which equal protection claims are considered more carefully by courts reviewing challenged actions, the court concluded that Batson — a Supreme Court case barring juror strikes based on race — also applies to strikes based on sexual orientation.

That's a pretty big deal, because it means that in finding sexual orientation is subject to heightened scrutiny, it means that all kinds of discrimination claims must be given serious consideration, and that the official view of the courts must be that LGBTQ Americans are a protected class of litigants that the court admits society has discriminated against, the same as racial and religious minorities.

In other words, the ruling has major implications for equality far beyond that of just jury duty.  And that's a good thing.  It also means that the Supreme Court will have to now weigh in on heightened scrutiny as it applies to LGBTQ Americans, which could pave the way for true equality across the country and not just a patchwork of state laws.

Judge Reinhardt's reasoning is that the Supreme Court all but established the heightened scrutiny precedent by deed in last June's decision to strike down parts of DOMA, even if they punted on the question as far as a technical standpoint.  Therefore, the standard exists and should be applied to all federal laws, and by default, state and local laws as well.

Some Are Way More Equal Than Others

As the latest Davos conference of the super wealthy happens this month in Switzerland, here's a not-so-gentle reminder from OxFam that wealth inequality is a global problem, not just a US one.

The world's wealthiest people aren't known for travelling by bus, but if they fancied a change of scene then the richest 85 people on the globe – who between them control as much wealth as the poorest half of the global population put together – could squeeze onto a single double-decker.

The extent to which so much global wealth has become corralled by a virtual handful of the so-called 'global elite' is exposed in a new report from Oxfam on Monday. It warned that those richest 85 people across the globe share a combined wealth of £1tn, as much as the poorest 3.5 billion of the world's population.


We're not even talking the one percenters here, but the richest .00001%.  The richest 1% globally have about 68 trillion pounds in collected wealth, or $110 trillion.

And guess which country has seen the largest growth in wealth for the top one percent since 1980? 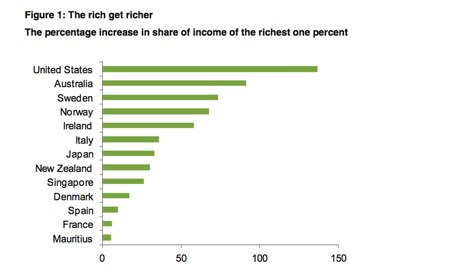 Think about that.
Posted by Zandar Permalink 10:00:00 AM No comments: