Last Call For The Kids Are Not Alright

C'mon Millennials, read the goddamn Constitution once in a while.


American Millennials are far more likely than older generations to say the government should be able to prevent people from saying offensive statements about minority groups, according to a new analysis of Pew Research Center survey data on free speech and media across the globe.

Even though a larger share of Millennials favor allowing offensive speech against minorities, the 40% who oppose it is striking given that only around a quarter of Gen Xers (27%) and Boomers (24%) and roughly one-in-ten Silents (12%) say the government should be able to prevent such speech.

Compared with people we surveyed in dozens of nations, Americans as a whole are less likely to favor the government being able to prevent speech of any kind. The debate over what kind of speech should be tolerated in public has become a major story around the globe in recent weeks – from racial issues on many U.S. college campuses to questions about speech laws in Europe in the wake of concerns about refugees from the Middle East and the terrorist attacks in Paris.


We've gone over "vile speech" before.  You may not like it, it's hateful, it's awful, but the Constitution is pretty clear about the government banning it.  It's not going to happen.

Now...you can definitely make the argument that this cartoon is out of bounds and that Pett went way over the line here, involving Bevin's four adopted children from Ethiopia.

But there's no such debate on the propriety of Bevin's response, via BuzzFeed's Chris Geidner: 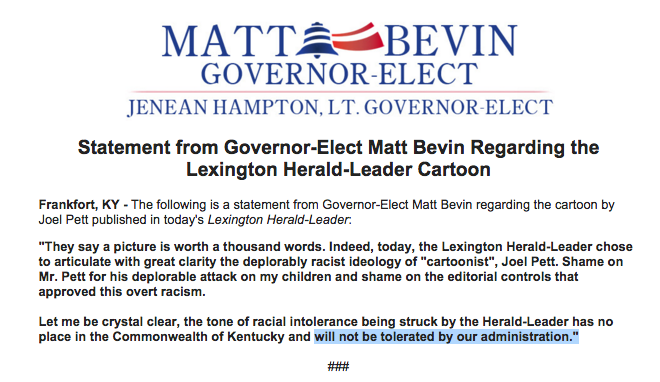 Like Pett's cartoon or not (I do not, and I think Pett should apologize) he still has free speech rights, and the direct threat of a governor saying that a political cartoonist or any member of the press's opinion "will not be tolerated by our administration" is flat-out unconstitutional.

There's no argument there to be had.

But welcome to Bevinstan.
Posted by Zandar Permalink 4:00:00 PM No comments:

There are people who are unconscionably awful human beings out there doing unspeakable things to their fellow humans, but I'm pretty sure the folks behind this are absolutely bound for the lower planes.

Two brothers in Horry County, South Carolina are facing charges that they treated a mentally handicapped black employee like a slave for years, beating and overworking the man, who lived in squalor on property owned by their restaurant.

According to the Charleston Post and Courier, two Charleston attorneys filed a civil suit on behalf of Christopher Smith, who worked at the J&J Cafeteria in Conway for 23 years, but was hideously abused and exploited from 2010 to 2014.

The suit lists 14 counts against J&J owner Ernest J. Edwards and manager Bobby Paul Edwards, including false imprisonment, discrimination and exploitive labor practices. Bobby Edwards, 50, was arrested a year ago in connection with the case. Those charges are still pending.

Last October, Smith was rescued when social workers received a tip from an anonymous source who expressed concern for the man’s safety. Attorneys Mullins McLeod and David Aylor said that while the civil suit cannot change the past or rectify the harm done to Smith, hopefully it will “bring about positive change in the future.”

The Post and Courier explained that Smith worked at the Edwards brothers’ business for more than two decades, but it was when Bobby took over as manager in 2010 that Smith’s situation turned ugly.

Smith was routinely called the N-word, according to the suit. He was savagely beaten with a frying pan, hot tongs, butcher knives, belt buckles and fists. He worked 18-hour shifts Monday through Saturday and 11-hour shifts on Sundays with no breaks, receiving little pay. His total wages for each year added up to less than $3,000.

The complaint against the Edwards said that Smith was often abused on the job, dragged into the walk-in freezer where he could be heard screaming in terror and pain by other employees and begging his abusers not to kill him.


And they kept him as an effective slave for years.  Please, please tell me these assholes are going to prison for a very long time.

Posted by Zandar Permalink 8:00:00 AM No comments: