In the end, I agree with Charlie Cook. Trump is out of time, Biden's lead is too big, Trump would have to run the table on too many states, and the only real question is how big Biden's victory margin will be.

On a hundred-odd Zoom meetings, webinars, and conference call speeches that I’ve participated in over the past two months, virtual attendees continue to raise the possibility of a contested presidential election, even though the chances of that have been getting smaller all the time. Every day that Trump remains behind in the polls, outspent badly and with the early vote gushing in, the cone of uncertainty narrows, and the odds of such an upset goes down.

Joe Biden’s path to 270 electoral votes seems pretty straightforward: Hold all 20 states (plus the District of Columbia) that Hillary Clinton carried four years ago, which total 232 electoral votes, just 38 short of the majority threshold of 270. Then win each of the three states that Clinton lost by eight-tenths of a point or less: Michigan (0.2 percentage points) Pennsylvania (0.7), and Wisconsin (0.8). That gives him 278 electoral votes, eight more than needed. Biden will likely also carry two congressional districts that eluded Clinton in 2016, Nebraska’s 2nd District and Maine’s 2nd, giving him 280 electoral votes. That would represent a “skinny” Biden win.

A big Biden win would bring in Arizona, Florida, and North Carolina, and might also include one or two states from the next tier, mostly likely Georgia or Iowa, although don’t count out Ohio or Texas. Generally speaking, Trump is underperforming his 2016 pace by 3 to 8 points, depending upon the state or district.

The RealClearPolitics average of national polls pegs Biden’s lead at 7.4 points, 51.1 to 43.7 percent. But that’s a less discriminating measure, including as it does some mediocre surveys, some that seemed congenitally slanted toward one side or the other, and some that would be better utilized lining hamster cages. The FiveThirtyEight modeled average of national polls, which is more selective than the RCP average but still includes some surveys that I consider rather sketchy, puts the Biden lead at 8.8 points, 52 to 43.2 percent.

I believe his actual lead is more like 9 or 10 points, based on the higher-quality, live-telephone-interview national polls conducted since the first debate, as well as the gold standard of online polling, the Pew Research Center’s mammoth poll of 11,929 voters released two weeks ago.

Any way you slice it, these are pretty good leads, considerably higher than the 3.2-point national margin that Hillary Clinton had over Trump in the RCP average on Oct. 29, 2016. When all the votes were counted, the margin ended up being 2.1 percent.

If I had to give you a map, and I do, frankly, it would look like this. 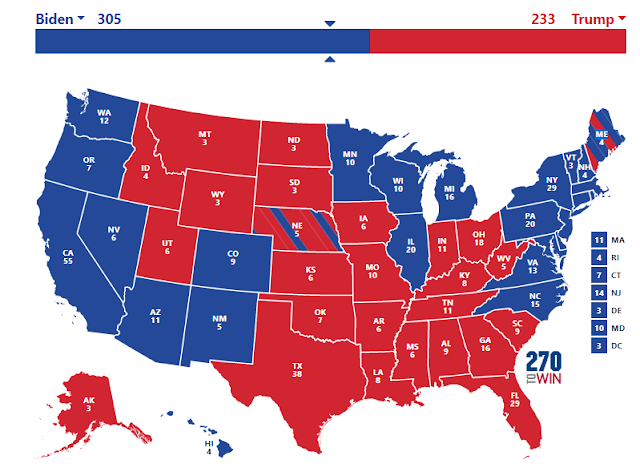 Email ThisBlogThis!Share to TwitterShare to FacebookShare to Pinterest
StupidiTags(tm): 2020 Elections, Biden-Harris, Trump Regime, Vote Like Your Country Depends On It

You're Vlad Marugov, The Sausage King Of Moscow?

Hey, it's not election news for once as the Sausage King of Moscow has been assassinated by crossbow bolt. Nope, serious. May even have not been Putin's fault, either.

A Russian oligarch, nicknamed The Sausage King, has been murdered with a crossbow, investigators say.

Vladimir Marugov and his partner were in an outdoor sauna when they were attacked, reportedly by two masked assailants.

The woman managed to escape through the window and call the police.

Detectives found the body of Mr Marugov, who owned some of Russia's largest meat-processing plants, in the sauna with a crossbow next to it.

The attack happened at Mr Marugov's countryside estate, about 40km (25 miles) outside the capital, Moscow, early on Monday morning, Russia's Investigative Committee (similar to the FBI in the US) reported.

It did not name the man, but local media identified him as Mr Marugov, the owner of the Ozyorsky and Meat Empire sausage factories.

The intruders demanded cash from Mr Marugov, before fleeing in a car, the Investigative Committee said.

The getaway car was later recovered on the outskirts of the town of Istra, outside Moscow.

This is twenty, thirty minutes of a good Guy Ritchie film right here.  Somebody get me Jason Statham, Peter Stormare, Rooney Mara and Dave Bautista.
Also, just kidding, everything having to do with Russian oligarchs dying is Putin's fault.
Posted by Zandar Permalink 4:00:00 PM No comments:

Leading US infectious disease expert Dr. Anthony Fauci is warning of a dire several months ahead as Donald Trump continues to lie to America about COVID-19 at his rallies, with just hours to go before Election Day. And for the first time, Fauci is now openly blaming Trump for the country's failures in controlling the pandemic.

Fauci, who once took a starring role in the response and briefed the president almost every day as director of the National Institute of Allergy and Infectious Diseases, described a disjointed response as cases surge. Several current and former senior administration officials said the White House is almost entirely focused on a vaccine, even though experts warn it is unlikely to be a silver bullet that ends the pandemic immediately since it will take months under the best of circumstances to inoculate tens of millions of people to achieve herd immunity.

Officials told governors on a call Friday that they hoped to begin distributing a vaccine by the end of the year, giving some specific guidance on how states would receive their first doses. Fauci focused on the rise in cases, according to people familiar with the call.

Fauci said the White House coronavirus task force meets less frequently and has far less influence as the president and his top advisers have focused on reopening the country. “Right now, the public health aspect of the task force has diminished greatly,” he said.

Fauci said he and Deborah Birx, coronavirus task force coordinator, no longer have regular access to the president and he has not spoken to Trump since early October. “The last time I spoke to the president was not about any policy; it was when he was recovering in Walter Reed, he called me up,” he said. Fauci said he phones into meetings of other staffers but largely avoids the West Wing because “of all the infections there.”

He also lamented that Scott Atlas, a neuroradiologist and Trump’s favored pandemic adviser, who advocates letting the virus spread among young healthy people and reopening the country without restrictions, is the only medical adviser the president regularly meets with.

Fauci said he actually appreciated chief of staff Mark Meadows saying last weekend on CNN that the administration was not going to control the pandemic. “I tip my hat to him for admitting the strategy,” he said. “He is straightforward in telling you what’s on his mind. I commend him for that.”

At one point during the interview, Fauci said he needed to be careful with his words because he would be blocked from doing appearances in the future.

Judd Deere, a White House spokesman, offered blistering criticism of Fauci for his comments in a statement to The Washington Post on Saturday. Deere said Fauci “knows the risks [from the coronavirus] today are dramatically lower than they were only a few months ago.”

“It’s unacceptable and breaking with all norms for Dr. Fauci, a senior member of the President’s Coronavirus Task Force and someone who has praised President Trump’s actions throughout this pandemic, to choose three days before an election to play politics,” Deere said. “As a member of the Task Force, Dr. Fauci has a duty to express concerns or push for a change in strategy, but he’s not done that, instead choosing to criticize the President in the media and make his political leanings known by praising the President’s opponent — exactly what the American people have come to expect from The Swamp.”

Deere added that the president “always put the well-being of the American people first,” citing his decision to cut off travel from China, his early shutdown of the country and his mobilization of the private sector to deliver critical supplies and develop treatments and vaccines.

It's far from the first time the Trump regime has gone after Fauci, but this is definitely the first time that the good doctor has taken a swing or three back like this. Should Trump win a second term, Fauci's name is almost certainly at the top of the list of Trump's mass loyalty purge.

President Donald Trump and his top aides are planning a huge overhaul of his Cabinet if he wins a second term, scuttling officials in key health-related and intelligence jobs who Trump views as disloyal, slow-acting or naysayers.

The shift would amount to a purge of any Cabinet member who has crossed the president, refused to mount investigations he has demanded, or urged him to take a different, more strict tack on the coronavirus response.

The evictions could run the gamut from senior health officials to much of the national security leadership. Already, the White House and administration officials have started to vet names of health care experts who could take over the agencies running many elements of the government’s pandemic response and overseeing the country’s health insurance system, according to two Republicans close to the White House. And the president is eying a remake of leadership at the FBI, CIA and Pentagon, exasperated with what he perceives as unwillingness to investigate his preferred subjects or take on the government’s “deep state.”

This personnel overhaul of the Trump Cabinet at the start of a second term would mirror the turnover his administration has already experienced during his first four years. Of the 23 Cabinet-level posts in the Trump White House, only seven officials lasted all four years. Many, including Secretary of State Rex Tillerson, Environmental Protection Agency chief Scott Pruitt and Health and Human Services Secretary Tom Price, had public and contentious departures. And it would represent a fully unencumbered Trump, no longer constrained by political considerations or pushback from Congress.

“I can only imagine the score-settling Trump would undertake if he won,” said one Republican close to the White House about the potential Cabinet shakeup.

235,000 Americans and counting are already dead, and hundreds of thousands more will follow in the weeks and months ahead, regardless of who wins the election. Trump will spend his final days in power making those who chose to vote him out of office suffer, win or lose.
So, if you're somehow still on the fence over your vote on Tuesday, for the love of God, vote for Biden.
Four more years of Trump will kill millions of us.
Posted by Zandar Permalink 10:00:00 AM No comments: