So, guess which GOP 2016 hopeful and former HP CEO failed to register carlyfiorina.org? 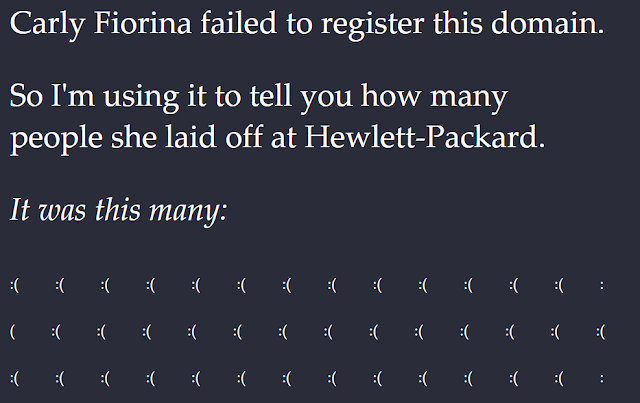 This goes on for a while.

Finally, at the bottom: 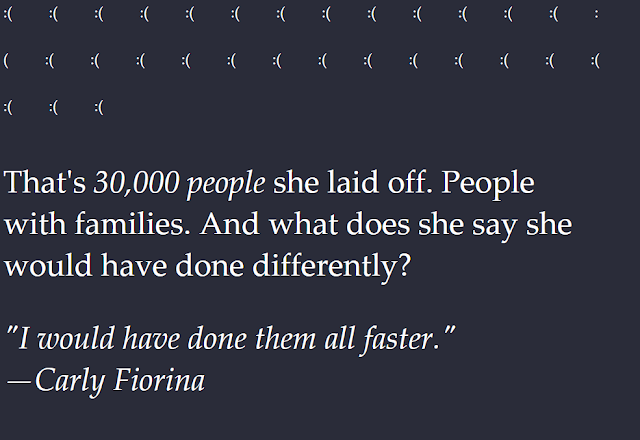 Why no, Carly Fiorina is not going to be President of the United States anytime soon, especially after getting paid $42 million to lay off those 30,000 people when that didn't fix HP's problems.

Hooray for wealth redistribution I guess if she's going to spend those millions maybe getting one or two percent of the GOP primary vote.
Posted by Zandar Permalink 9:37:00 PM 1 comment:

I'm not really sure what worse, the fact that two gunmen opened fire on a Texas event to draw the Prophet Mohammad, or the fact the event was designed specifically to provoke this kind of response and that the organizers are thrilled that this happened.

Texas police shot dead two gunmen who opened fire on Sunday outside an exhibit of caricatures of the Prophet Mohammad that was organized by an anti-Islamic group and billed as a free-speech event.

The shooting in a Dallas suburb was an echo of past attacks or threats in other Western countries against art depicting the Prophet Mohammad. In January, gunmen killed 12 people in the Paris offices of French satirical magazine Charlie Hebdo in revenge for its cartoons.

Sunday's attack took place at about 7 p.m. in a parking lot of the Curtis Culwell Center, an indoor arena in Garland, northeast of Dallas. Geert Wilders, a polarizing Dutch politician and anti-Islamic campaigner who is on an al Qaeda hit list, was among the speakers at the event.


Now, this seems important: we don't have a motive for this yet, but people are making a lot of assumptions. At least one of the suspects was in fact someone the FBI has been watching, a convicted felon on probation.

The exhibit was organized by Pamela Geller, president of the American Freedom Defense Initiative (AFDI). Her organization, which is described by the Southern Poverty Law Center as a hate group, has sponsored anti-Islamic advertising campaigns in transit systems across the country.

Organizers of the "Muhammad Art Exhibit and Contest" said the event was to promote freedom of expression. They offered a $10,000 prize for the best artwork or cartoon depicting the Prophet, as well as a $2,500 "People's Choice Award."

Depictions of the Prophet Mohammad are viewed as offensive in Islam, and Western art that portrays the Prophet has sometimes angered Muslims and provoked threats and attacks from radicals.


I'll spare you the link to Geller's blog on this event, but she's thrilled and ecstatic this happened because it proves that basically all Muslims in America need to be shot, or something. Yes, the gunmen opened fire and they were immediately killed by the hefty security forces that Geller hired for the event. one security guard was shot in the leg, and nobody else but the gunmen were killed.

But frankly, if the worst "Christians" in America got into a shooting match with the worst "Muslims" in this country, I'd be rooting for nobody to be left standing so that the rest of us can get back to our lives.

May The Fourth Be With You

And also with you. (Catholic Jedi joke, Zandardad will laugh for hours.)

May 4th has gotten to be a pretty decent sized unofficial holiday for Star Wars fans, so much so that you'll find all kinds of events today.

"May the 4th be with you" is a full-fledged unofficial holiday, "Star Wars Day."

Actually, as far as Lucasfilm and Disney are concerned, it's quite official.

So why this day, and what is there to do other than watch it trend on Twitter? (After all, it's apparently important enough to send hardcore fans into a tizzy when they feel it's been mistreated.)

As legend has it, and according to the origin story recognized by Lucasfilm, the phrase was first used on May 4, 1979, the day Margaret Thatcher took office as UK prime minister. The Conservative party allegedly placed an ad in the London Evening News which read, "May the Fourth Be With You, Maggie. Congratulations."

It took off in the social media age (where it has become a big deal every year) and finally expanded to real-life with events in Toronto. Now, there are events celebrating the day worldwide.

There are online and in-store deals on "Star Wars" merchandise and gaming, "Star Wars" food galore and events where fans are encouraged to dress up or play "Star Wars" trivia or just enjoytheir favorite film franchise.


Well, Thatcher was pretty much a Sith Lord, so it makes sense.  Anyhow, bunch of awesome deals on Star Wars stuff and fun events to check out too.  Here's hoping that Episode VII restores balance to the Force after the trashing it got with the three prequel films.  Odds are we'll still have a long way to go to get the series back on track.

Email ThisBlogThis!Share to TwitterShare to FacebookShare to Pinterest
StupidiTags(tm): Games And Hobbies, Movies