Last Call For A Higher State

I still have an enormous number of serious disagreements with the Catholic Church I was raised in, but the Pope is doing the right thing here when it comes to Palestinian recognition.

The Vatican has officially recognized the state of Palestine in a new treaty.

The treaty, which was finalized Wednesday but still has to be signed, makes clear that the Holy See has switched its diplomatic relations from the Palestinian Liberation Organization to the state of Palestine.

The Vatican had welcomed the decision by the U.N. General Assembly in 2012 to recognize a Palestinian state. But the treaty is the first legal document negotiated between the Holy See and the Palestinian state and constitutes an official recognition.

Palestinian President Mahmoud Abbas is due to see Pope Francis on Saturday before the canonization of two new saints from the Holy Land a day later.


Recall that Pope Francis played a major role in helping to normalize the US/Cuba relationship, so he may know a thing or two about diplomacy.  But this is pretty huge, to have the Vatican recognize a full Palestinian state.  That will put a lot of pressure internationally on Israel, and Bibi's already reeling from his recent re-election close call with a less than fully stable coalition government.

The timing couldn't be better if you're Abbas, and I'm pretty sure President Obama isn't exactly upset over this either.

We'll see where this leads.
Posted by Zandar Permalink 10:15:00 PM No comments:

The Big Trade Off

Fast track authority for the Trans-Pacific Partnership trade deal was never, ever, ever in real trouble, but Senate Democrats got their win.

Senate Democrats handed President Obama a stinging rebuke on Tuesday, blocking consideration of legislation granting their own president accelerated power to complete a major trade accord with Asia.

The Senate voted 52-45 on a procedural motion to begin debating the bill to give the president “trade promotion authority,” eight votes short of the 60 needed to proceed. Republicans and pro-trade Democrats said they would try to negotiate a trade package that could clear that threshold.

But the vote Tuesday presented Mr. Obama what might be a no-win situation. He may have to accept trade enforcement provisions he does not want in order to propel the trade legislation through the Senate, but those same provisions might doom the Pacific trade negotiations that legislation is supposed to lift.


So now Senate Democrats can step in and force changes to the negotiations, and that was exactly the plan.

According to several Senate sources — whose accounts match up with what some reporters are spilling forth on the twitters — the deal between Senate Dems and Republicans looks something like this:

1) The Senate would vote first on a package that includes a measure stiffening enforcement on foreign companies evading import duties and a measure that would force the administration to take action against countries manipulating currency to juice exports. Those were chiefly sought by Senators Ron Wyden and Chuck Schumer. There might also be a vote on a measure that would favor U.S. imports of some products from certain African countries.

2) Then the Senate would proceed to a vote on whether to move forward with Fast Track, which would mandate that a final Trans-Pacific Partnership trade deal is subject only to an up-or-down Congressional vote, with no amendments or filibusters. The vote on Fast Track would also include Trade Adjustment Assistance, which helps workers hurt by trade policies. Presumably, if the first two above items sought by Dems pass, a group of around a dozen pro-trade Democrats — who helped block Fast Track yesterday — would then vote to move it forward.

Previously, that group of pro-trade Democrats had joined the filibuster of the Fast Track vote because it only included assistance for workers displaced by trade, and not the currency manipulation or enforcement provisions.


And in the end, there may be no deal at all...or the rest of the world will simply make a deal and we will have no seat at the table for US workers at all.

It's funny.  This is basically the exact situation the Senate placed the President in when it came to the Iran negotiations: the insertion of a poison pill that would scrap the entire deal.  Senate Dems sure were pissed off when Republicans tried it, and the fate of an Iran nuclear deal remains up in the air as a result.

But putting in a poison pill measure doesn't seem to be a problem for Dems anymore.  That currency manipulation provision may be the straw that breaks the entire TPP.

Amazing how that works.
Posted by Zandar Permalink 4:00:00 PM 4 comments:

The latest Pew Research poll on Americans and religion finds that those of us who are unaffiliated with a particular religion are now the second largest religious category, surpassing Catholics Mainline Protestants since 2007 and are now second only to Evangelical Christians.

The Christian share of the U.S. population is declining, while the number of U.S. adults who do not identify with any organized religion is growing, according to an extensive new survey by the Pew Research Center. Moreover, these changes are taking place across the religious landscape, affecting all regions of the country and many demographic groups. While the drop in Christian affiliation is particularly pronounced among young adults, it is occurring among Americans of all ages. The same trends are seen among whites, blacks and Latinos; among both college graduates and adults with only a high school education; and among women as well as men.

To be sure, the United States remains home to more Christians than any other country in the world, and a large majority of Americans – roughly seven-in-ten – continue to identify with some branch of the Christian faith.1 But the major new survey of more than 35,000 Americans by the Pew Research Center finds that the percentage of adults (ages 18 and older) who describe themselves as Christians has dropped by nearly eight percentage points in just seven years, from 78.4% in an equally massive Pew Research survey in 2007 to 70.6% in 2014. Over the same period, the percentage of Americans who are religiously unaffiliated – describing themselves as atheist, agnostic or “nothing in particular” – has jumped more than six points, from 16.1% to 22.8%. And the share of Americans who identify with non-Christian faiths also has inched up, rising 1.2 percentage points, from 4.7% in 2007 to 5.9% in 2014. Growth has been especially great among Muslims and Hindus, albeit from a very low base.

The drop in the Christian share of the population has been driven mainly by declines among mainline Protestants and Catholics. Each of those large religious traditions has shrunk by approximately three percentage points since 2007. The evangelical Protestant share of the U.S. population also has dipped, but at a slower rate, falling by about one percentage point since 2007.2

Even as their numbers decline, American Christians – like the U.S. population as a whole – are becoming more racially and ethnically diverse. Non-Hispanic whites now account for smaller shares of evangelical Protestants, mainline Protestants and Catholics than they did seven years earlier, while Hispanics have grown as a share of all three religious groups. Racial and ethnic minorities now make up 41% of Catholics (up from 35% in 2007), 24% of evangelical Protestants (up from 19%) and 14% of mainline Protestants (up from 9%).


The big drop in religious Americans is most notable among Millennials. 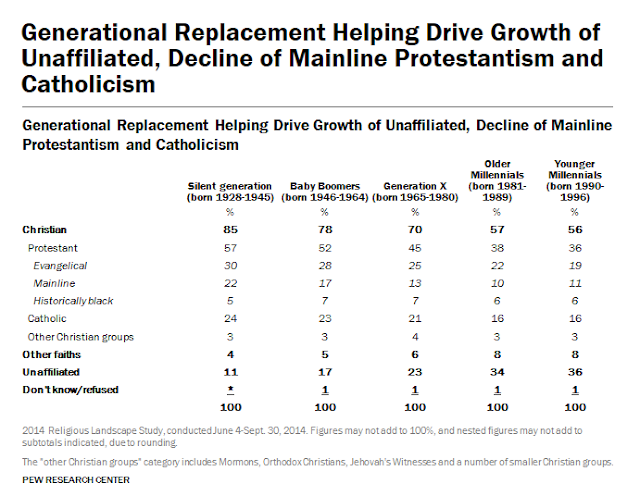 More than a third of Millennials are unaffiliated with a religion, and barely more than half are Christian.  That's going to have a huge effect on America's social fabric going forward.  I'm betting the numbers for post-Millennials (those born after 2000) will be even more in the religiously unaffiliated given another ten years or so.  They may not even be majority Christian anymore. Among younger Millennials, the percentage of unaffiliated ties that of Protestants (36%).

No wonder Evangelicals are freaking out on the whole WE'RE TAKING OUR COUNTRY BACK and AMERICA IS A CHRISTIAN COUNTRY crap.  Religion is definitely declining in the US, and very rapidly.

We won't be a "Christian country" much longer.  Give it another generation at this rate and we'll be unaffiliated as a plurality.
Posted by Zandar Permalink 10:00:00 AM No comments: