Once again the Trump regime is signaling that it expects the Mueller investigation to be over very soon, despite all evidence to the contrary involving such a detailed, meticulous criminal probe by a career law enforcement official who rose to become FBI director and his hand-picked team of criminology field experts.  As I have said before, this isn't a prediction that the investigation will end soon as much as it is an open threat that it will be ended.

President Trump's legal team is standing by its prediction that a central part of the probe into Russia's election meddling will conclude quickly.

Trump lawyer Jay Sekulow reasserted in an interview Monday with The Wall Street Journal that the parts of special counsel Robert Mueller's probe involving Trump would end soon, though he did not mention specific dates.

"I know we, collectively, the lawyers, are looking forward to an expeditious wrapping up of this matter," Sekulow told the Journal.

A spokesman for Mueller's team declined to comment for the newspaper's report.

Experts have said it is unlikely that the special counsel's probe will wrap up anytime soon, given the scope of the investigation that has reached into the upper echelons of the White House.


Nobody expects this to "conclude quickly" except for the guy who can fire the Deputy Attorney General who appointed Mueller in the first place.  Funny, that.

Of course, they've been predicting this for a while now, first it was Thanksgiving and then January.  So far that hasn't come to pass.  Yet.

But they are certainly continuing to prepare for it coming to pass.

Rep. Francis Rooney (R-Fla.) on Tuesday called for a "purge" of the FBI, warning of "deep state" figures at work in the agency.

Rooney said during an interview on MSNBC that the American people have "very high standards" for the country's government agencies, and suggested they aren't being met.
He was pressed during the interview on whether he is trying to discredit the Department of Justice, and by extension the investigation into Russia's election interference.

"I don't want to discredit them. I would like to see the directors of those agencies purge it," he replied.

"And say, look, we've got a lot of great agents, a lot of great lawyers here, those are the people that I want the American people to see and know the good works being done, not these people who are kind of the deep state."

When pressed further he specifically mentioned Peter Strzok, a top FBI agent who worked on the investigation into Hillary Clinton's use of a private email server as secretary of State.

Stzok had been a member of special counsel Robert Mueller's team, but was removed this summer over text messages he sent that were critical of President Trump.


And of course there's nobody who would love to see a mass firing of career FBI, NSA< CIA and DIA agents than Vladimir Putin.  There's a reason they keep using the phrases "purge" and "deep state".
Posted by Zandar Permalink 4:00:00 PM No comments: 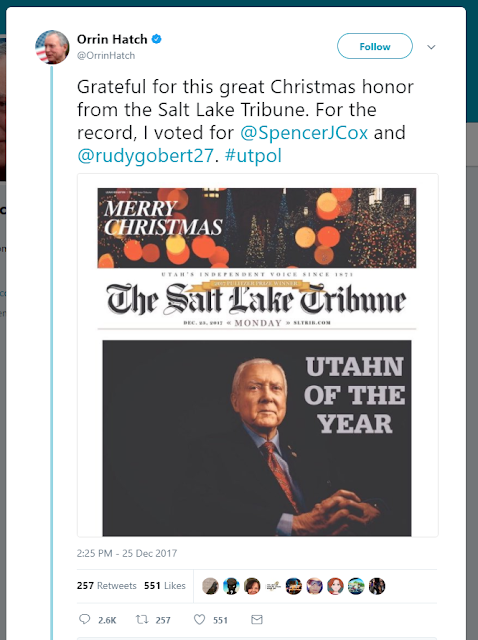