Didn't even take a day for Trump to start out 2018 with calls on Twitter for the Justice Department to round up and arrest his political opponents.

In a tweet, Trump also urged the Justice Department to act in prosecuting Abedin and former FBI director James B. Comey, who the president fired in May amid the mounting investigation into Russia's meddling in the 2016 presidential election and contacts between Moscow and Trump's campaign. 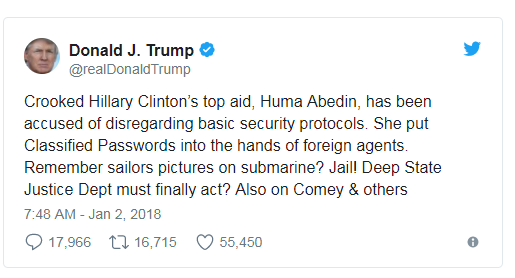 The State Department, responding to a lawsuit from Judicial Watch, posted online copies of Abedin's emails from her nongovernment address that had been discovered on the laptop of her estranged husband, Anthony Weiner, during an FBI investigation.

In his tweet, Trump appeared to be reacting to a report in the Daily Caller that found Abedin had forwarded State Department passwords to her personal Yahoo account before Yahoo faced high-level hacks that affected all account-holders.

Trump has previously accused Comey of leaking sensitive information after the former director testified that he had asked a friend to pass on notes he had taken of his interactions with Trump to a reporter for the New York Times in hopes of securing a special prosecutor to take over the Russia investigation. Ethics experts said Comey's actions appeared to be legally protected, provided he did not disclose classified information.

In his tweet, Trump referred to the “Deep State Justice Department,” an apparent reference to the president's contention that some elements of the U.S. intelligence apparatus have attempted to undermine his election. Trump has said there is no evidence that he colluded with Russian agents during the campaign.

The End Of The Peace Process

We're only beginning to see the real consequences of Donald Trump's move to recognize Jerusalem as the exclusive capital of Israel. Frankly, it's the beginning of the end of the two-state solution era and the Israeli-Palestinian peace process. Israeli hardliners are now moving to make its end effectively permanent.


An emboldened Israeli right wing is moving quickly in the new year to make it far more difficult to create a Palestinian state, signaling its intention to doom hopes for a two-state solution to the conflict.

The actions have come on multiple fronts, as Prime Minister Benjamin Netanyahu’s party for the first time has urged the annexation of Jewish settlements in the West Bank, and the nation’s top legal officers pressed to extend Israeli law into occupied territory.

In addition, the Israeli Parliament, after a late-night debate, voted early Tuesday to enact stiff new obstacles to any potential land-for-peace deal involving Jerusalem, while abandoning at the last minute a measure that would have eased the way to rid the city of several overwhelmingly Palestinian neighborhoods.

Coming on the heels of President Trump’s recognition of Jerusalem as Israel’s capital in defiance of decades-old United States policy and international consensus, the moves showed that the Israeli right senses a new opening to pursue its goal of a single state from the Jordan River to the Mediterranean.

“We are telling the world that it doesn’t matter what the nations of the world say,” Public Security Minister Gilad Erdan told more than 1,000 members of Likud’s central committee on Sunday. “The time has come to express our biblical right to the land.”


And that's really the crux of the issue.  There will be no sharing of Jerusalem with the Palestinian people.

But Palestinians and Israeli supporters of a two-state solution said the moves revealed the true colors of the country’s ascendant right wing.

“We hope that this vote serves as a reminder for the international community that the Israeli government, with the full support of the U.S. administration, is not interested in a just and lasting peace,” Mahmoud Abbas, president of the Palestinian Authority, said Monday, adding that he would respond by revisiting the authority’s existing agreements with Israel. “Rather, its main goal is the consolidation of an apartheid regime in all of historic Palestine.”

Daniel Seidemann, director of Terrestrial Jerusalem, which focuses on the Holy City’s fate in a potential two-state solution, said that “what was winked and nodded about before is now being acknowledged publicly: ‘We have no intent of sharing this land with anybody else except as a barely tolerated minority.’”


And that tolerance will almost certainly end with another Palastinian uprising and a swift and utterly brutal, overwhelming response from the Israeli military.  Only this time around the Israeli military won't be holding back. The incalculable damage from Trump's foreign policy in just 2017 will be felt for decades, if not generations.
Posted by Zandar Permalink 4:00:00 PM No comments:

Germany's new law on social media hate speech went into effect on Monday along with the new year. Apparently the new legislation already has its first high-profile political violator in less than 24 hours.


Germany has started enforcing a strict new law around hate speech on social media — and has already launched a criminal investigation into a far-right MP who called Muslims "barbarians."

The new law, known locally as NetzDG or the Network Enforcement Act, forces social media sites to delete offensive posts. It came into effect on January 1, and covers Twitter, Instagram, Facebook, Snapchat, Google, and YouTube, but excludes LinkedIn and WhatsApp, according a report in Deutsche Welle.

Beatrix von Storch is the deputy leader of far-right party AfD and is under investigation by the police for recent inflammatory Facebook and Twitter posts describing Muslims as "barbarians." In a now-deleted tweet, she complained that Cologne police were tweeting season's greetings in Arabic and claimed this was trying to appease "gang-raping" Muslims.

According to reports, she was temporarily blocked from Twitter but has now been reinstated.

Von Storch reposted the same message on Facebook on December 31 as a kind of test to see whether it would be deleted. Her post remains live on Facebook as of Tuesday morning.


In addition to criminal investigations, the law allows for substantial fines for social media companies (up to a whopping 50 million euros!) if they don't investigate and delete hate speech in a very timely manner.  Needless to say, free speech advocates are warning of massive overreaction by Facebook and Twitter.

Not everyone is happy about the change. Reporters Without Borders said in July that the "Facebook law" would have a negative impact on press freedom.

"The short deadline for removal, coupled with the threat of heavy fines, will very likely drive social networks to remove more content than is legally justified. Even journalistic publications will face a real danger of being affected by this kind over-blocking without due process," said the organisation's executive director for Germany, Christian Mihr, at the time.


Something like this would never pass constitutional muster in the US, which is yet another reminder that free speech advocates here stateside really don't know the difference between "The government is censoring me" and "The company whose social media platform I use can make its own terms of use."  Germany's social media law is definitely an example of the former.
Posted by Zandar Permalink 10:00:00 AM No comments: