Now out of office, Barack Obama can officially be ranked by C-SPAN's tabulation by presidential historians, and the man from Hawaii ends up in the 12 spot, maybe not Mount Rushmore territory, but certainly one of the better chief executives we've had.

The network asked 91 presidential historians to rank every former president on 10 leadership attributes. C-SPAN also performed the survey in 2000 and 2009.

Ronald Reagan was judged the ninth best president of all time, up from No. 10 in 2009.
In a press release accompanying the results, historian Richard Norton Smith, an academic adviser for the project, noted that five of the top 10 judged presidents in the American pantheon served between 1933 and 1969.

“It reinforces Franklin Roosevelt's claim to be not only the first modern president but the man who, in reinventing the office, also established the criteria by which we judge our leaders,” he said. 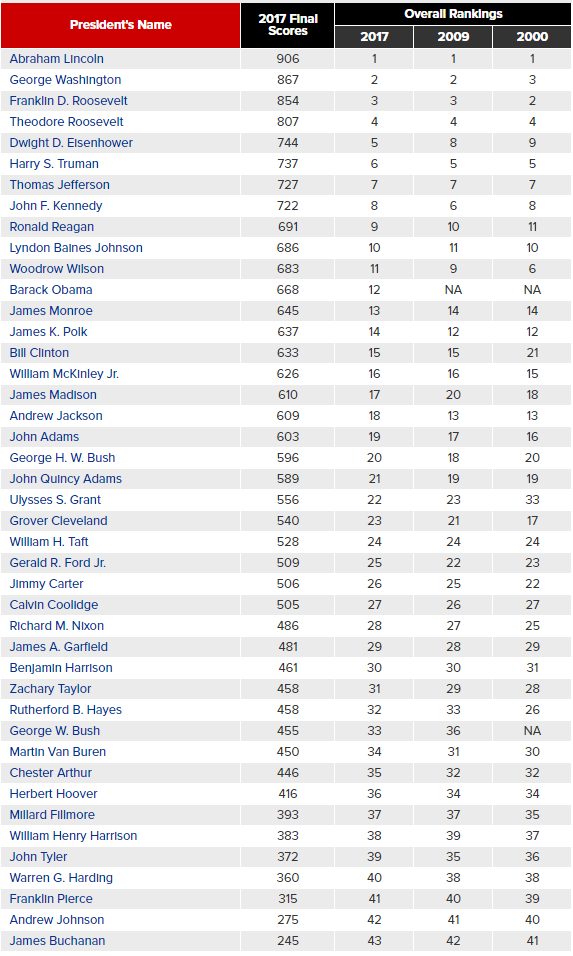 So yeah, for those of you playing at home, Dubya moved up a few notches into "C-plus Augustus" territory, and James "Oops I accidentally The Civil War" Buchanan still sets the nadir for the office. Reagan, still silly overrated, and Big Dog's still hanging at 15. Jimmy Carter is in the middle of the pack at 26, and Poppy Bush rounds out the top 20.

One has to wonder where The Donald will end up on this list.  I'm betting south of Hoover.

Meanwhile, the Trump regime's wacky antics are providing plenty of cover for the rest of the GOP to start denying rights to people as the regime plans to gear up for mass deportations, and soon.  Of course, part of that means excluding Democrats from knowing what's going on.

Two members of the Congressional Hispanic Caucus (CHC) were asked to leave a meeting between lawmakers and the country's top immigration enforcement official Thursday.

Reps. Luis Gutiérrez (D-Ill.) and Norma Torres (D-Calif.) were asked to leave the room, while several other members of the CHC were not allowed into the meeting with Immigrations and Customs Enforcement (ICE) acting Director Tom Homan.

The meeting was originally scheduled for Tuesday, but ICE canceled, saying too many attendants had signed up. ICE then coordinated with House leadership, setting up a bipartisan meeting with a limited guest list.

Several Democrats, including House and CHC leadership, did attend the meeting.
Gutiérrez was the first to be asked to leave. Outside the room, he met Reps. Grace Napolitano (D-Calif.) and Juan Vargas (D-Calif.), who had not been allowed in.

Vargas, a former member of the Jesuit order, then led a prayer with Gutiérrez and Napolitano. Rep. Lou Correa (D-Calif.) arrived and joined the prayer circle.

Gutiérrez said Speaker Paul Ryan's (R-Wis.) spokeswoman had asked him to leave the room. Ryan was not at the meeting.

"It was the Speaker's staff that came to me, and I know her very, very well, and she said she was speaking on behalf of the Speaker, that there were a limited number of seats," Gutiérrez said.


Of course, only Democrats were kicked out of the meeting, and they all happened to be members of the Congressional Hispanic Caucus, but that was the whole point. So what was so bad that Democrats had to be thrown out of a meeting with ICE?

Like I keep saying, those ICE privately-run detention facilities won't make any money unless they're filled with deportees.  The job of filling them will get underway very shortly.

BREAKING: Trump administration considers mobilizing as many as 100,000 National Guard troops to round up unauthorized immigrants.
— The Associated Press (@AP) February 17, 2017


This is America now, about to have a deportation force of 100,000.  The great purge begins soon.

Better have your papers.

A draft memo obtained by The Associated Press outlines a Trump administration proposal under consideration to mobilize as many as 100,000 National Guard troops to round up unauthorized immigrants. Millions of those who would be affected in 11 states live nowhere near the Mexico border.

The 11-page document calls for the unprecedented militarization of immigration enforcement as far north as Portland, Oregon, and as far east as New Orleans, Louisiana. If the proposal is implemented, governors in the affected states would have final approval on whether troops under their control participate.


Hell of a Friday news dump, huh. Fear will keep the undocumented in line.  Fear of this deportation army trial balloon.
Posted by Zandar Permalink 4:00:00 PM No comments:

But He Hires The Best People

Unfortunately it doesn't look like he vets those people.

Several White House staffers were dismissed Thursday morning after failing FBI background checks, according to sources familiar with the matter.

Some of the aides were "walked out of the building by security" on Wednesday after not passing the SF86, a Questionnaire for National Security Positions for security clearance.

Among those who won't be working at the White House was President Donald Trump’s director of scheduling, Caroline Wiles, the daughter of Susan Wiles, Trump’s Florida campaign director and former chief of staff to Governor Rick Scott. Wiles, who resigned Friday before the background check was completed, was appointed deputy assistant secretary before the inauguration in January. Two sources close to Wiles said she will get another job in Treasury.

She's among others who failed to pass the intensive background check, which includes questions on the applicant's credit score, substance use and other personal subjects.


These are people who can't pass the most basic security clearance background checks.  One of them would have been the person making Trump's daily schedule.

This is the most incompetent group of idiots in White House history.
Posted by Zandar Permalink 10:00:00 AM No comments: