GOP Gov. Matt Bevin and Kentucky Republicans are about to raise taxes on 95% of Kentuckians in order to give millions to the wealthiest one percent in the state.  Surprise!

A new study of the tax bill rushed through the Kentucky General Assembly Monday shows the changes it makes to the tax code are likely to lower taxes for the wealthy while raising taxes for 95 percent of Kentuckians.

The analysis, performed by the Institute for Taxation and Economic Policy in Washington D.C., a liberal-leaning think tank, studied the impact of the tax cuts and increases on Kentuckians.

The bill applies Kentucky’s 6 percent sales tax to 17 services, increases the cigarette tax by 50 cents per pack, and cuts the individual and corporate income tax to a flat 5 percent tax. It also cuts some typical tax deductions, including those for medical expenses, medical insurance, paid taxes and investment income.

The bulk of the increase for Kentuckians comes from the sales tax.


The hardest hit dollar-wise: Kentuckians making between $55,000 and  $92,000 will see their taxes go up by an average of $213 a year.  Percentage-wise, the bill is a nearly 1% tax increase on the poorest people in the state just to save millionaires a lousy seven grand.

Also if you still get your insurance and retirement plan through your employer, congratulations, you won't be able to deduct as much for it so you'll be paying more taxes on those benefits as well.

So go for it Matt Bevin, sign into law the biggest tax increase on Kentuckians in state history.

Republicans like Wisconsin GOP Gov. Scott Walker are in full panic mode now as they are warning that they expect massive carnage for Republicans in November. Steve Benen:


Ordinarily, a state Supreme Court race wouldn’t garner national attention, but yesterday’s contest in Wisconsin was anything but a local affair.

And Dallet’s hammering of conservative judge Michael Screnock on Tuesday prodded Republican Gov. Scott Walker, who had endorsed Screnock, to warn his fellow Republicans that more losses could be coming.

According to the Milwaukee Journal Sentinel, her victory marked “the first time in 23 years that a liberal candidate who wasn’t an incumbent won a seat on the high court.” What’s more, it wasn’t close: as of the latest tally, Dallet appears to have won this race by nearly 12 points.

Scott Walker, who’s running for a third term this year, pointed to the results as proof that a “blue wave” may be coming to Wisconsin.


The latest Cook Political Report numbers for the House are grim for the GOP, seven pickups and anywhere from 40 to 66 more Republican districts in play, including 21 GOP tossup districts, and it's only April. 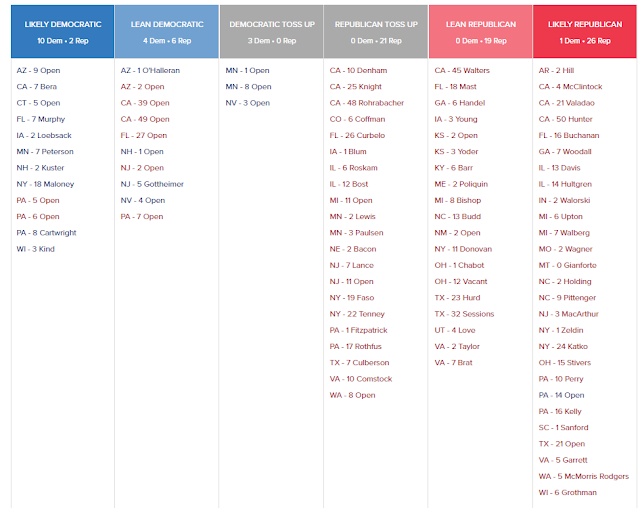 Dems could pick up as many as seven seats in Pennsylvania alone. Another nine could come from California, five in New York, and four in Texas.  Just those four states alone could give the Dems the numbers they need to take back the House.

Now imagine what could happen in the other 46.
Posted by Zandar Permalink 10:00:00 AM No comments:

Email ThisBlogThis!Share to TwitterShare to FacebookShare to Pinterest
StupidiTags(tm): 2018 Elections, GOP Stupidity, Scott Walker, Vote Like Your Country Depends On It