Last Call For Qatar In The Act

Time to check in with America's 'allies' in the Middle East, and it turns out the increasingly ugly fight between Qatar and Saudi Arabia may have been taken to a flashpoint by the UAE.


The United Arab Emirates orchestrated the hacking of Qatari government news and social media sites in order to post incendiary false quotes attributed to Qatar’s emir, Sheikh Tamim Bin Hamad al-Thani, in late May that sparked the ongoing upheaval between Qatar and its neighbors, according to U.S. intelligence officials.

Officials became aware last week that newly analyzed information gathered by U.S. intelligence agencies confirmed that on May 23, senior members of the UAE government discussed the plan and its implementation. The officials said it remains unclear whether the UAE carried out the hacks itself or contracted to have them done. The false reports said that the emir, among other things, had called Iran an “Islamic power” and praised Hamas.

The hacks and posting took place on May 24, shortly after President Trump completed a lengthy counterterrorism meeting with Persian Gulf leaders in neighboring Saudi Arabia and declared them unified.

Citing the emir’s reported comments, the Saudis, the UAE, Bahrain and Egypt immediately banned all Qatari media. They then broke relations with Qatar and declared a trade and diplomatic boycott, sending the region into a political and diplomatic tailspin that Secretary of State Rex Tillerson has warned could undermine U.S. counterterrorism efforts against the Islamic State.


So the question is what did Trump say in that meeting in Saudi Arabia that gave the UAE the green light for all of Team Riyadh to leave Doha out to dry?  The UAE is of course denying the hell out of the move, but then again it's not like there isn't a reason to believe Trump does things like have other countries hack things to his benefit these days, right?

The revelations come as emails purportedly hacked from Otaiba’s private account have circulated to journalists over the past several months. That hack has been claimed by an apparently pro- Qatari organization calling itself GlobalLeaks. Many of the emails highlight the UAE’s determination over the years to rally Washington thinkers and policymakers to its side on the issues at the center of its dispute with Qatar.

All of the Persian Gulf nations are members of the U.S.-led coalition against the Islamic State. More than 10,000 U.S. troops are based at Qatar’s al-Udeid Air Base, the U.S. Central Command’s regional headquarters, and Bahrain is the home of the U.S. Navy’s 5th Fleet. All are purchasers of U.S. defense equipment and tied to U.S. foreign policy priorities in numerous ways.

The conflict has also exposed sharp differences between Trump — who has clearly taken the Saudi and UAE side in a series of tweets and statements — and Tillerson, who has urged compromise and spent most of last week in shuttle diplomacy among the regional capitals that has been unsuccessful so far.

“We don’t expect any near-term resolution,” Tillerson aide R.C. Hammond said Saturday. He said the secretary had left behind proposals with the “Saudi bloc” and with Qatar including “a common set of principles that all countries can agree to so that we start from . . . a common place.”


Now, if you wanted to split the US coalition with both the Sunni and Shi'a Gulf states and leave a gigantic mess to take advantage of, having the Qatari emir's real thoughts on his Saudi 'friends' leaked all over the media is definitely the way to go.  The US position, thanks to the worst diplomats ever, is now that America clearly favors the Sunni side of the equation.

I'll give you three guesses as to which large country north of China is more than happy to exploit this rift here, and the first four don't count.

July has been the worst month for the Trump regime yet, and new historic lows for Trump's approval ratings at the six month mark means the Russia mess is definitely catching up to him.  As usual, the largest drop is among Trump's own supporters, who were willing to overlook a multitude of sins, but maybe not so much taking away their health insurance and you know, treason.


Americans give President Donald Trump the lowest six-month approval rating of any president in polls dating back 70 years, punctuated by questions about his competence on the world stage, his effectiveness, the GOP health care plan and Russia’s role in the 2016 election.

Just 36 percent of Americans polled in a new ABC News/Washington Post poll approve of Trump’s job performance, down 6 points from his 100-day mark, itself a low. The previous president closest to this level at or near six months was Gerald Ford, at 39 percent, in February 1975. 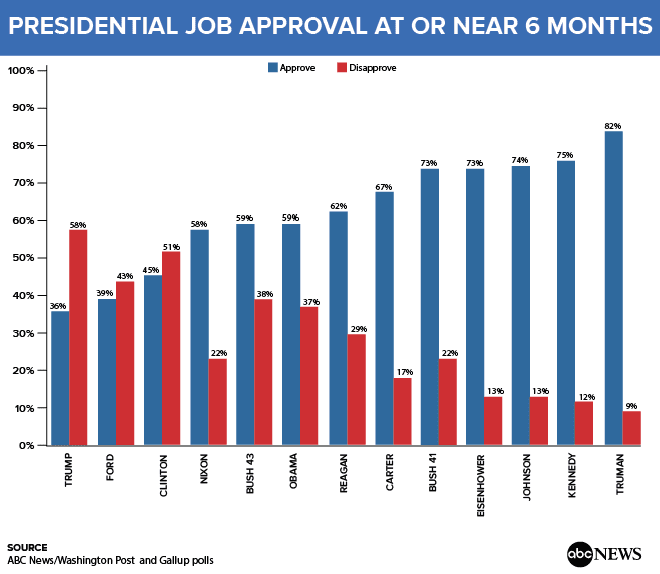 Sixty-three percent in this poll, produced for ABC News by Langer Research Associates, say it was inappropriate for Trump’s son, son-in-law and campaign manager to have met with a Russian lawyer during the campaign. Six in 10 also think Russia tried to influence the campaign, and among those who say so, 67 percent think Trump aides helped, similar to results in April.

Yet the Russia controversy is just one on the list of Trump’s troubles. Just 38 percent say he’s making significant progress toward his goals; 55 percent think not. With no apparent help from the G-20 summit, two-thirds don’t trust him to negotiate with other world leaders -- or with Russian President Vladimir Putin specifically -- on America’s behalf. And about half say the country’s world leadership has grown weaker under Trump; just 27 percent say it’s gotten stronger.


Only Bill Clinton, who at this point in 1993 was facing the fallout from the crises of the first WTC bombing in February and the Waco Branch Davidian siege, coupled with his own "unpopular" health care ideas, was anywhere really close to where Trump is today.  Gerald Ford, who America turned to after Nixon and Agnew resigned, was similarly hamstrung.  One went on to two terms, one barely lasted 2 years.

When you think of American states that are environmental disasters, you might bring up Pennsylvania's Three Mile Island, Ohio's burning rivers, Nevada's Yucca Mountain, or West Virginia's mountain strip mines, but the worst state for toxic environmental deaths is far and away Louisiana, home to Cancer Alley, and unlike those other states, there's basically zero effort to clean up the bayou and its petrochemical and refinery industries.


If you’re visiting New Orleans and want to see something truly amazing, take your beer or daiquiri to-go and walk a few blocks past the Superdome—you’ll find a school being constructed on an old waste dump.

“All the toxins from the landfill are still there,” says toxicologist Wilma Subra. These toxins include lead, mercury, and arsenic, exposure to which can lead to reproductive damage, and skin and lung cancer. Even more astonishing, Subra says hundreds of schools across Louisiana have been built on waste dumps. Why? Dumps represent cheap land often already owned by a cash-strapped town or city, plus serve as rare high ground in a flood-prone state. And this is just the beginning of Louisiana’s nightmare.

The risk of cancer in Reserve, a community founded by freed slaves, is 800 times the national average, making the community, by one EPA metric, the most carcinogenic census tract in America—the cause is a DuPont/Denka chemical plant adjacent to the town that annually spews 250,000 pounds of the likely carcinogen chloroprene into the air. If you think the situation in Flint is bad, there are approximately 400 public water systems in Louisiana with lead or other hazardous substances leaching into the drinking water. Meanwhile, hundreds of petrochemical plants peppered across the state’s lush swampy interior freely emit carcinogens, endocrine disruptors, and neurotoxins into the air and water, as well as inject them deep into the earth.

Perhaps it’s no surprise that Louisiana is ranked, according to different surveys, 47th in environmental quality, third in poverty, and 49th in education. Are you still gushing about your latest trip to New Orleans for Jazz Fest Presented by Shell, or French Quarter Festival presented by Chevron? “New Orleans is the best,” one visitor recently wrote to me, “you are so smart to live there!” But how smart is it to allow children to attend school built on toxin-laced waste? How smart is it to allow a community’s cancer rates to shoot off the charts? Louisiana is rich in culture, spirit, and faith, yet what type of state knowingly poisons its own people? What type of country stands by and allows it to happen?

While it is fashionable to critique President Trump for his scientific ignorance, science was misdirected long before Trump laid hands on it. It is time to open our eyes and see what is really going on in this world, to critique our society’s dinosaur methods, then step back and imagine what a new path forward might look like. It is with this aim that I begin a science column for Longreads. In my first story I’ll tour us through a land America should have never allowed to materialize—it’s what I’m calling the Louisiana Environmental Apocalypse Road Trip. As the Trump administration chucks environmental science out the window, evaporates industry regulations, and cripples agencies charged with protecting the environment, this tale is relevant for all Americans, because the poisoning happening in Louisiana could happen in your state too—in fact, it is probably already happening.

But for now sit back, enjoy a signature New Orleans cocktail from the comfort of your couch or chair, and get ready to keep reminding yourself: Yes, this is occurring in 2017 in the United States of America.


Here's a heart-stopper: as awful as things are in places like Reserve and other rural parish towns where the entire economy is run on making deadly chemicals out of ground sludge, under the Trump regime it's only going to get exponentially worse as the GOP's austerity budget will hit these places first, and hit them the hardest.
Posted by Zandar Permalink 10:00:00 AM No comments: