What should have been an easy win for House Republicans in Ohio in another unconstitutional district that they gerrymandered specifically to get rid of long-time Ohio Democratic Rep. Marcy Kaptur has seemingly blown up n their faces thanks to their terrible candidate to replace her, secessionist and serial liar J.R. Majewski.

House Republicans have withdrawn their advertising for Ohio Republican J.R. Majewski, a MAGA-aligned candidate who was at the Capitol during the Jan. 6 riots, Axios has learned.

What's happening: The National Republican Congressional Committee withdrew about $1 million in ad reservations for the district, according to a GOP source familiar with its strategy, all but surrendering the seat to Democratic Rep. Marcy Kaptur.

Why it matters: Kaptur's redrawn district — which backed Trump by three points in 2020 — once looked like an easy pickup for House Republicans. The GOP is now at risk of squandering another race because Republican primary voters nominated an extreme candidate.

Details: Majewski, an Air Force veteran, has been under fire for sympathizing with the QAnon conspiracy theory movement and saying that every state that backed Trump in 2020 should secede from the United States.

The AP reported this week that Majewski misrepresented his military service, inaccurately claiming he was deployed to Afghanistan after the 9/11 attacks. In reality, he spent six months loading planes at an air base in Qatar.

The AP wrote: "His post-military career has been defined by exaggerations, conspiracy theories, talk of violent action against the U.S. government and occasional financial duress."

Zoom in: Democrats have been relentlessly hammering Majewski on television over his extremist views. "He broke through police barricades at the Capitol, then blamed police for the riot. Now he wants to break our country apart," one Kaptur ad says. "He's not just radical, he's dangerous!"

Majewski lied about his military service, he lied about his direct involvement in the January 6th terrorist attack, and he has no business being a free man walking the streets, let alone in the House. Even this Republican party is giving up on him because what they hate most isn't Democrats, Democrats serve as targets and useful enemies they can focus on.
Seeing his campaign come apart in real time, Majewski tried to save his ass with a lame press conference earlier today.

Majewski had a press conference on Friday to address allegations raised by the AP piece -- and, according to Toledo Blade reporter Luke Ramseth, he said that he could not provide details about his purported deployments to Afghanistan because they were classified.

"The orders and military records that I have been able to obtain from my personal files shows that all of my deployments are listed as classified," he said.

What's more, Majewski issued threats to sue the Associated Press, and said that in Congress he would push for new laws to make it a crime to "besmirch veterans" such as himself.

With six weeks left of Majewski's stupid lies and threats to the media and Kaptur ads to wreck this idiot, I'm betting that Kaptur pulls this off and keeps her seat.
And Dems get one step closer to keeping the House.
Posted by Zandar Permalink 10:07:00 PM No comments:

The most corrupt, most broken Republican state government in America continues to get worse as the nation's poorest state, Mississippi, deals with twin scandals of welfare money embezzlement and state capital Jackson's wrecked water system, and this is coming from someone who has lived in KY for the last 16 years.

First up, the state welfare director that oversaw the slush fund is pleading guilty to both state and federal charges and cooperating with prosecutors.

Former welfare agency director John Davis is set to plead guilty on Thursday to two federal charges and 18 state counts of fraud or conspiracy related to his role in the Mississippi welfare scandal, according to separate federal and state court filings.

The new federal charges pertain to welfare funds Davis allegedly helped funnel to the companies of retired professional wrestler Ted “Teddy” DiBiase Jr., son of famed WWE wrestler Ted “The Million Dollar Man” DiBiase. Davis and Teddy DiBiase Jr. had developed a close relationship during Davis’ term as welfare director from 2016 to 2019, as Mississippi Today has reported in its investigative series “The Backchannel.”

Davis instructed two nonprofits receiving tens of millions in welfare funds from his department to pay Teddy DiBiase Jr. under what the federal court filing called “sham contracts” to deliver personal development courses to state employees and a program for inner-city youth, “regardless of whether any work had been performed and knowing that no work would ever be performed.”

Davis, who had not previously faced federal charges for his role in the welfare scandal, is the latest defendant to plead guilty and agree to aid prosecutors. In April, Nancy and Zach New pleaded guilty to state charges in the welfare case as well as to separate federal fraud charges they faced related to public school funding. The News are cooperating with federal investigators, who continue to probe the welfare scheme and who else may have been involved.

The federal bill of information unsealed Wednesday, to which Davis is set to plead guilty, also describes four unnamed co-conspirators in the scheme. Based on the incorporation dates provided in the filing for the co-conspirators’ affiliated organizations or companies, Mississippi Today identified three of the alleged co-conspirators as Nancy New, director of Mississippi Community Education Center; Christi Webb, director of Family Resource Center of North Mississippi; and Teddy DiBiase Jr., owner of Priceless Ventures, LLC and Familiae Orientem, LLC.

A fourth unnamed co-conspirator, a resident of Hinds County, is unidentifiable in the filing.

Davis and the three alleged co-conspirators are each facing civil charges in an ongoing lawsuit Mississippi Department of Human Services is bringing in an attempt to recoup welfare money from people who received it improperly.

“As a result of the actions of DAVIS, the Co-Conspirators, and others, millions of dollars in federal safety-net funds were diverted from needy families and low-income individuals in Mississippi,” the federal filing reads.

The Brett Favre stuff is only $3-4 million of the $77 million stolen. A lot of people are going to jail on this one, folks.

And many more people need to go to jail over Jackson's broken water supply.

The plaintiffs claim they were poisoned by lead and other contaminants in Jackson's drinking water.

"This didn't start a couple weeks ago. This started years ago," said lead plaintiff Priscilla Sterling.

Meanwhile, House Democrats want to get Jackson the money they need, as state Republicans wasted, spent elsewhere, or outright stole the money to keep the water system going.

House appropriators are considering sending as much as $200 million to address the drinking water crisis in Jackson, Miss., as part of the stop-gap spending measure to fund the government past Sept. 30.

Documents obtained by POLITICO show draft language that would deliver the money directly from EPA to the city, bypassing the Republican-controlled state government. Democrats, including Rep. Bennie Thompson (D-Miss.), have accused the state of withholding resources from the majority Black state capital.

The numbers: Thompson told POLITICO he is pushing for $200 million in emergency funds for a first phase to address the dilapidated water infrastructure in Jackson.

Jackson’s 150,000 residents were without drinking water for weeks this summer after flooding on the Pearl River caused the system’s water pressure to drop precipitously. The city has also issued a series of boil water orders throughout the year due to dangerous water quality.

Jackson’s water system, which was built in 1914, is in a dire state of disrepair, according to a 2020 EPA review. The total cost for upgrading it is unclear, but estimates have ranged as high as $1 billion. The city has not completed a long-term plan for addressing its problems. Thompson said $200 million is “what appears to be reasonable” now, in the absence of a plan.

Keep in mind that the victims in both of these scandals are some of Mississippi's poorest Black communities. It's 2022, and Republican environmental and economic racism continues in full swing across red state after red state.
It has all my life, and it will continue well after we're all gone.
Posted by Zandar Permalink 4:00:00 PM No comments:

The latest Cook Political Report analysis of the House has Republicans at 212 and Dems at 192, with 31 tossups, 22 Dem seats and 9 GOP seats. Republicans only have to pick up 6 of those 22 Dem toss-ups to win the House back. 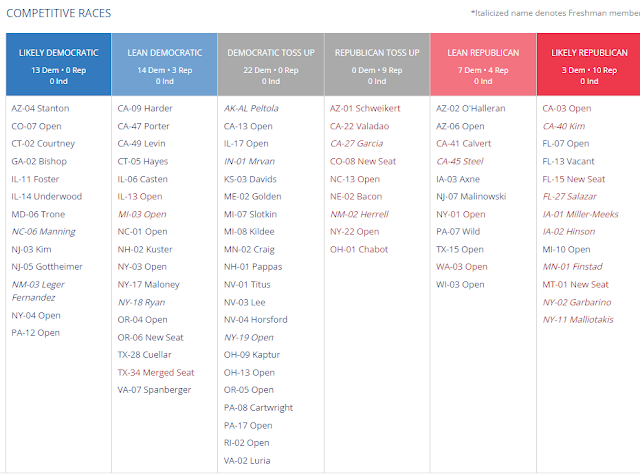 Every Dem win of those 9 GOP toss-ups will be critical, including Cincinnati's competitive district, OH-1. Dems can keep the House, but it's going to require some heavy lifting.

It's a far better picture than even last month or in June, when Republicans were expected to pick up 40+ seats as opposed to the 15-20 now.

Dems can win this, but they're going to have to get some very close wins in those toss-up districts.

Republicans are still favored, but nowhere near as much as they were. That's progress.