Just a reminder that 3.2 million Americans have lost their health insurance since Trump took office, and that number is expected to rise significantly.

The percentage of U.S. adults without health insurance was essentially unchanged in the fourth quarter of 2017, at 12.2%, but it is up 1.3 percentage points from the record low of 10.9% found in the last quarter of 2016. The 1.3-point increase in the uninsured rate during 2017 is the largest single-year increase Gallup and Sharecare have measured since beginning to track the rate in 2008, including the period before the Affordable Care Act (ACA) went into effect. That 1.3 point increase represents an estimated 3.2 million Americans who entered the ranks of the uninsured in 2017. 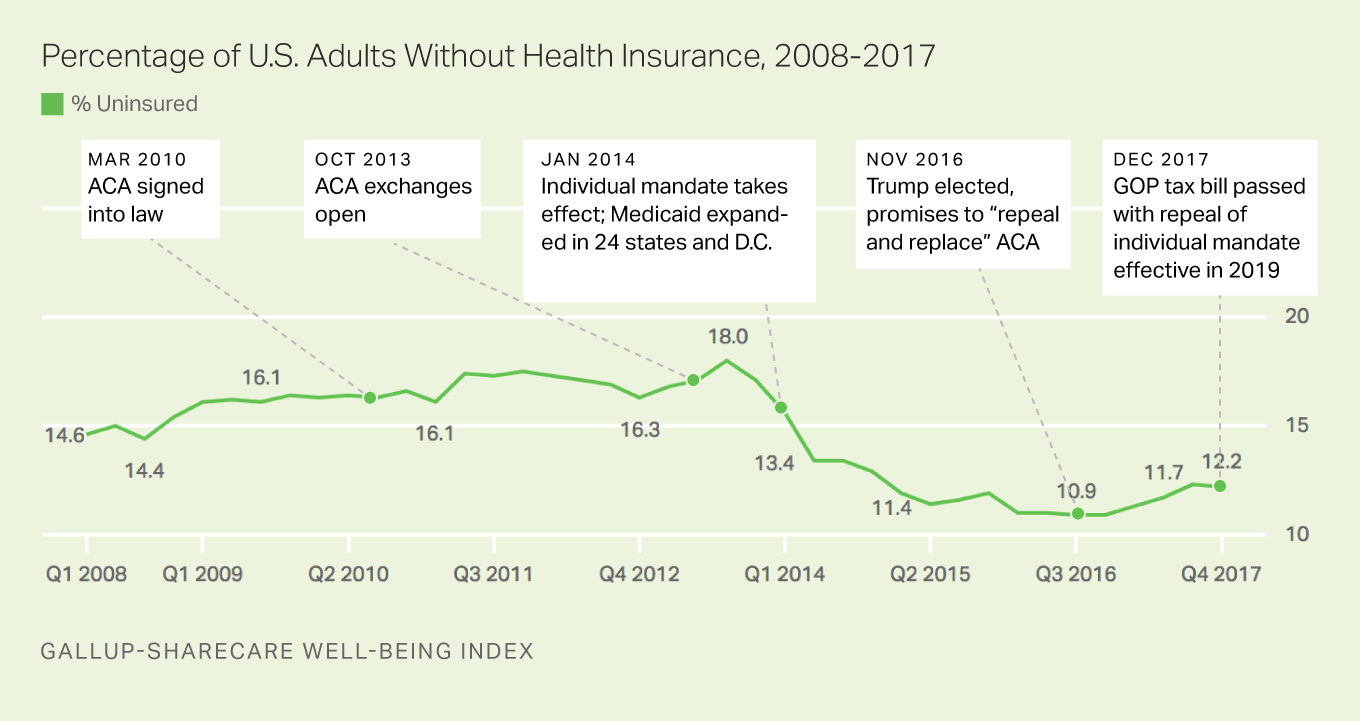 The results for the fourth quarter of 2017 are based on more than 25,000 interviews with U.S. adults aged 18 and older from October 1 to December 31, conducted as part of the Gallup-Sharecare Well-Being Index.


It's only going to get worse of course, but guess who has already lost their insurance first?

The uninsured rate rose for all demographic groups in 2017, with the exception of those aged 65 and older, all of whom qualify for Medicare coverage. It increased most among young adults, blacks, Hispanics and low-income Americans.

Importantly, the uninsured rate among adults aged 18-25 rose by 2.0 points in 2017. Young adults serve a critical function in healthcare markets because their low usage of healthcare helps offset the higher costs of insuring older Americans.


And without the individual mandate, that rate will only go up.  By rates I mean both percentage of uninsured, and premium costs.  It's going to get bad, folks.  Millions more will lose their insurance, probably tens of millions, over the next few years.

We're going to look back at 18% uninsured in this country as "the good ol' days" pretty soon, especially for African-Americans and Hispanic folks.  As long as we're suffering more, poor white voters will continue to support the GOP, even as Republican policies literally kill them.
Posted by Zandar Permalink 9:13:00 PM No comments:

The saga of Missouri GOP Gov. Eric Grietens continues amid last week's news of a scandal involving blackmail, abuse, and cover-up.  As Democrats call for his resignation, now we find out that Greitens violated the state's open records law. to avoid being caught.

With Greitens’ behavior during the affair now the subject of a criminal probe by St. Louis Circuit Attorney Kim Gardner, it remains unclear how the Republican-controlled Legislature will move forward in the remaining four months of the legislative session.

The stunning development already upended plans to push forward with the governor’s agenda on ethics and regulatory reform. The House had been poised to cap off last week by taking votes on a Greitens-led initiative to limit gifts from lobbyists, as well as lift regulations on hair braiders, but they left town Thursday without taking a vote, saying they wanted members to leave early to beat an impending winter storm.

The ability of Greitens to govern was already in jeopardy in the Senate, where he is facing blowback for appointing a majority of new members to the state Board of Education in order to oust the state’s top school leader.

Sen. Gary Romine, R-Farmington, earlier said he planned to use his filibuster powers to block the appointments from being confirmed. Senate President Pro Tem Ron Richard, R-Joplin, said he was putting the appointments on the backburner to let tempers cool.
Greitens was further impeded by an investigation by Attorney General Josh Hawley into his administration’s use of a secretive app that deletes text messages, potentially in violation of state open records laws.

“I think the agenda will continue to advance, (but) it’s going to cause some additional hurdles,” Graves said.


Gosh, you think?  And yes, even in the Trump era, state Republicans are raising the possibility of impeachment if Grietens doesn't step down.

Even if the governor does weather the scandal it could severely damage his ability to pass his agenda.

Many Republican lawmakers have voiced support for investigating the allegations and at least one, Sen. Gary Romine of Farmington, has raised the possibility of impeachment if an investigation does not exonerate the governor.

A poll that was conducted on the heels of the scandal by Remington Research Group, a GOP-leaning firm, shows that the governor’s brand has been damaged by the scandal.

The poll found that only 32 percent of likely Missouri voters have a favorable opinion of the governor, which is a drop of 10 percentage points from a poll conducted by the same firm a week earlier.


Grietens is crashing and burning pretty hard right now.  We'll see if he survives, but my guess is if Alabama's Robert Bentley was forced out last year for less in a blood red state, then Greitens isn't long for his job.  It won't stop the Missouri GOP from continuing to wreck the state's economy, but it will slow them down a tad.

Not Completely Out Of Neutral Just Yet

Democrats in the Senate now say they have 50 votes to override the FCC's decision to end net neutrality regulations of the internet, all 49 Democratic senators now that Alabama Sen. Doug Jones has been seated, plus Maine Republican Sen. Susan Collins.


“With full caucus support,” said Senate Minority Leader Charles E. Schumer (D-N.Y.), one of the lawmakers spearheading the effort, “it’s clear that Democrats are committed to fighting to keep the Internet from becoming the Wild West where ISPs are free to offer premium service to only the wealthiest customers while average consumers are left with far inferior options.”

To pass the Senate, backers of the resolution must recruit one more Republican member to their ranks. The measure must survive the Republican-majority House and be signed by President Trump to take effect.

After an independent agency makes a decision — such as the FCC's net neutrality deregulation — federal lawmakers have a window of 60 legislative days to reverse the move under the Congressional Review Act. As of last Tuesday, 40 senators had signed on to the resolution to challenge the FCC under the act. Since then, 10 more have joined the effort.

Democrats have said they plan to make net neutrality a midterm campaign issue, forcing vulnerable GOP candidates to stand with their party and adopt a position that, according to some surveys, is at odds with that of the broader public.

It's possible that Trump would sign this if he can be talked into the populist aspects of it, but I just don't see how this gets through the House currently.  Maybe that's the point though: if the Dems can show such a measure can pass the Senate, it would show voters how important it is that the GOP finally gets booted out of controlling the House.

Of course it'll be too late to reverse the FCC's decision by 2019 when the new Congress is sworn in, cold comfort I know. But it's something, and better than the Dems just giving up like they normally do in these situations.

On the other hand, it may be that the best thing the Dems do is try and fail, leading to something like Comcast or Charter then offering metered or tiered internet plans based on sites that people...and businesses...visit.  You want to get millennials to register to vote and show up in November, have Verizon charge an extra $10 per month to access social media sites on your phone or Comcast charge an extra $20 to stream Netflix or Hulu.

That's where we're heading, of course, and other countries that don't have net neutrality measures are already doing this, like Guatemala and Portugal.

In many countries without net neutrality, mobile plans are the worst culprit. Take what happens in Guatemala, for example. “Many people will have two SIM cards there because on one SIM card they can access WhatsApp for free, and on another SIM card you access Facebook for free,” says Renata Avila, a senior adviser at the Web Foundation. If you buy a small amount of data that gets used up quickly, WhatsApp will still be accessible after the cap is reached, but not the rest of the internet. If you do try to access other websites or apps, you’ll be prompted to pay more. Similar mobile internet plans exist in Balkan countries, Avila said, but there you might buy a SIM card that favors Viper, a popular messaging service in that region.

This practice is also common throughout the European Union. The EU has net neutrality laws, but they don’t outright prohibit mobile plans that allow users to only access certain apps without cutting into their data plans. Rep. Ro Khanna, a Democrat from California, described the situation in Portugal in a tweet that went viral in October. The tweet showed a page from Meo, a mobile and home internet provider in Portugal that offers various packages made up of websites and apps that don’t cut into your monthly data plan. So if you use social media a lot, you can buy a package that allows you to use Snapchat, Twitter, Facebook, Instagram, and a few other major social media companies without cutting into your data, a practice commonly called zero-rating. It’s a model that actually isn’t illegal in the U.S. even under the current network neutrality rules, which state that the FCC can consider on a case-by-case basis whether companies are using data caps in anti-competitive ways. In fact, AT&T already does this in the U.S. by providing its home broadband customers with unlimited free data when they also subscribe to the AT&T-owned DirecTV. AT&T mobile customers can also stream content from DirecTV for free. Similarly, certain T-Mobile plans allow users to stream as much Spotify or Apple Music as they’d like without cutting into their data allotment.

This may sound like a nice perk, but privileging access to certain apps in packages like this helps cement the dominance of incumbent powerful internet brands, since users can’t even access other apps once their small pool of data is used up, and it’s the telecomm that decides which apps make it into the bundle. “This incentivizes telecoms not to increase data caps on mobile internet,” says Estelle Masse, a senior policy analyst at Access Now, an international digital rights advocacy group. A more net neutrality friendly approach, Masse explains, would be to get rid of or lift the data caps altogether.


So yeah, zero-rating and tiered packages are coming, my guess is before the end of the year.  The old days of metered dial-up AOL web access 25 years ago sound like a joke to kids these days, but we'll be going right back to that sooner than you think.
Posted by Zandar Permalink 10:00:00 AM No comments: