Yes, he's running for 2024, NPR with the headline of the evening. 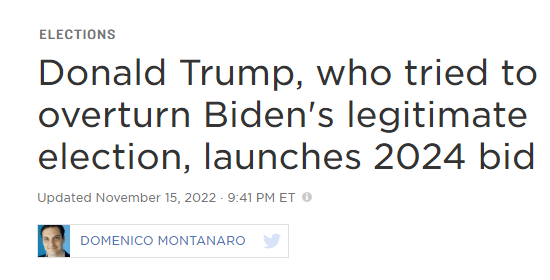 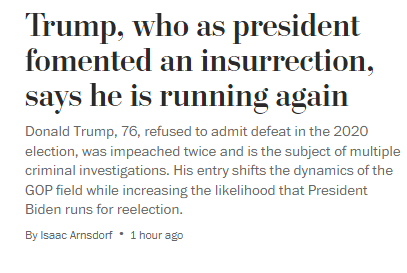 100% factual stuff. Screw you for making me create the damn 2024 Elections tag already, you asshole. Let the pillorying begin.

And hopefully the indictments.

They Voted Like Their Country Depended On It, Con't

Arizonans elected Democratic Secretary of State Katie Hobbs for Governor, sending Kari Lake to the bottom of the mud.

Hobbs' victory is key for Democrats in a presidential battleground state and a rebuke to a prominent election denier — although the closeness of the contest left the result up in the air for nearly a week.

“I am honored to have been selected to serve as the next Governor of Arizona,” Hobbs said in a statement Monday night. “I want to thank the voters for entrusting me with this immense responsibility. It is truly an honor of a lifetime, and I will do everything in my power to make you proud.”

A record number of early ballots were dropped off on Election Day in Maricopa County, officials said, which had to be processed in a more time-intensive manner that includes signature verification. Maricopa, the state's most populous county, said Sunday that it estimated that its count was 94% complete after it received a historic 290,000 of those early ballots on Election Day.

Lake, a MAGA firebrand and former local newscaster who closely linked her campaign to former President Donald Trump and his false claims of a rigged election in Arizona, ultimately fell short after polling in the final weeks of the campaign suggested she was grabbing the lead from Hobbs, who as secretary of state in 2020 vocally defended the state's election system and the accuracy of the count.

About 90 minutes after NBC News called the race for Hobbs, Lake tweeted: "Arizonans know BS when they see it."

Lake of course is not going to give up. Me, I expect Arizona Republicans to propose a recall election next spring, as California Republicans tried to do to Gov. Gavin Newsom. According to Arizona's recall process, Hobbs would have to be in office for at least six months, and then Republicans would need to collect enough signatures for a total of 25% of all 2022 voters within 120 days.
However even will all that, the soonest a recall could be put to voters is 2024 given that there's a 60-day period to review signatures, and that "The recall election will occur on the first consolidated election date that is at least 90 days in the future", meaning that there wouldn't be enough time to put it on the 2023 ballot (if off-year elections even count as "consolidated").
Keep an eye on that page to see if recall petitions are filed.
Posted by Zandar Permalink 4:00:00 PM No comments:

Email ThisBlogThis!Share to TwitterShare to FacebookShare to Pinterest
StupidiTags(tm): 2022 Elections, Katie Hobbs, Vote Like Your Country Depends On It

Ukraine In The Membrane, Rudy Edition

The federal probe into Rudy Giuliani's lobbyist chicanery in Ukraine has been officially closed with no charges brought.

Federal prosecutors investigating Rudy Giuliani’s activities in Ukraine have closed their investigation after more than two years and said no criminal charges will be brought.

Prosecutors with the office of US Attorney for the Southern District of New York have been investigating Giuliani, the former personal attorney to former President Donald Trump, for possible violations of foreign lobbying laws since early 2019.

On Monday, they informed a judge overseeing the investigation that they were closing the case.

The notification came in a court filing with prosecutors asking the judge to terminate the special master who was appointed to oversee a review of documents obtained when the FBI executed a search warrant on the former New York City mayor’s home in April 2021.

“The Government writes to notify the Court that the grand jury investigation that led to the issuance of the above-referenced warrants has concluded, and that based on information currently available to the Government, criminal charges are not forthcoming,” prosecutors wrote.

A spokesman for the US attorney’s office declined to comment.

“It’s wonderful, long-expected news,” said Robert Costello, an attorney for Giuliani. “Unfortunately, Mayor Giuliani had to spend two and a half years to three years with this cloud over his head.”

Ted Goodman, a spokesperson and political adviser to Giuliani, said: “The mayor has been completely and totally vindicated. We hope this will help bring an end to the unwarranted attacks on the mayor - a man who is quite literally the most successful prosecutor of the most dangerous criminals over the past fifty years. I challenge someone to find a more successful crime fighter than Rudy Giuliani, a man who cleaned up city government and took down the mafia."

This is astonishing. Are you telling me as incompetent as Giuliani was, all the mistakes made, all the clear foreign lobbyist violations he made, that the investigation is over without a single charge being filed?
You couldn't find a way to make charges stick to this idiot?
Any charges at all?
The Special Master on this case, Judge Barbara Jones, is moving on to become the Independent Monitor of the Trump Organization NY state case.
Make of that what you will, all I see is red and green.
Posted by Zandar Permalink 10:00:00 AM No comments: