Last Call For The Reach To Impeach, Con't

Texas Democratic Rep. Al Green forced Nancy Pelosi's hand on impeachment on Wednesday, filing articles of impeachment against Donald Trump and a vote that went down in absolute flames.


The House on Wednesday killed an attempt to impeach President Trump for statements that the chamber condemned this week as racist, turning aside an accusation that he had brought “ridicule, disgrace and disrepute” to his office.

But 95 Democrats signaled their support for impeachment, while 137 opposed it — a dramatic split signaling trouble ahead for a divided party.

The 332-95 vote to table the impeachment article drafted by Representative Al Green, Democrat of Texas, constituted the first action by the House since Democrats took control in January on a measure to impeach Mr. Trump, a significant move that Speaker Nancy Pelosi of California and other party leaders have toiled to avoid. By agreeing to table the article, Ms. Pelosi and the Democrats put off — at least for now — a prolonged and divisive debate over whether Mr. Trump’s conduct warrants his expulsion.
But the measure highlighted the rifts among Democrats about how to deal with Mr. Trump, between progressives who want to challenge him more aggressively and moderates desperate to quash talk of impeachment and stick to a poll-tested agenda that includes improving health coverage and raising wages for working people.

Ms. Pelosi has been caught in the middle as she tries to maintain some semblance of control over the party’s agenda as Mr. Trump dictates the terms of the debate. Those dynamics have already dominated the House’s business this week. For two days, Democrats feuded with the president over nativist posts on Twitter about four freshman Democratic congresswomen of color, culminating in a nasty floor fight on Tuesday that left progressives energized but moderates fretting over wasted precious time.

“You have to give him credit: He’s a great distractor,” Ms. Pelosi, Democrat of California, said of Mr. Trump on Wednesday. She waved off questions about whether the Democrats’ policy priorities were being eclipsed by the president’s antics, saying, “We’re not having him set our agenda; we’re setting our own agenda.”

Ms. Pelosi said that she had no quarrel with Mr. Green, but that the House was already taking sufficient steps to hold Mr. Trump accountable for his conduct.


Well, the people that wanted IMPEACHMENT NOW got their wish, and it cratered spectacularly, plus Trump now gets to claim victory, and the Village will spout "Dems in disarray!" stories for months now.

Any momentum towards getting Republicans to condemn Trump has died screaming, even though it was only four Republicans and Justin Amash, and two of those Republicans are retiring anyway.

So I guess we're going to blame Pelosi, demand her resignation, not vote next year out of rage when she doesn't resign, and then cry some because that will show Trump, huh?

While Rep. Green is 100% correct in his assessment and in his charges against Trump, absolutely serious question posed to the readership, what positive benefit did this accomplish for Team Blue?  How did this not hurt another impeachment attempt through inquiries?

Talk me down, guys.  Please.


I'll repeat what I said yesterday: Trump can't possibly fire up his base more than he already has. They'll crawl through ground glass to vote for him. They're locked in. He's wasting energy selling them on a product they're already 100% certain to buy. It's not as if he can motivate them to vote for him more than once. But when he plays the race card this way, he motivates independents and women, including some who chose him in 2016, not to vote for him.

Trump's usual mode is barely concealed racism, but the Squad inspired him to dispense with even the tiny bit of deniability in his standard rhetoric. If he keeps up his vendetta against them in this way -- or if, perhaps, he's inspired to go full-on racist against, say, Kamala Harris if she's on the Democratic ticket -- I think he'll lose. The Squad may be the foil Trump wants, but what he wants might be the opposite of what he needs.


It's a good theory and it makes sense on the surface.

But I disagree strongly with it.

Amid all the ongoing changes in the country that generally favor Democrats, is it still possible that President Donald Trump will be reelected in 2020? Because I study religious and demographic change, I hear this question a lot. Much of the early punditry on Trump’s reelection prospects has focused on complex Electoral College scenarios—insights that, while valuable, shed little light on the bigger picture. I’ve come to answer the question this way: Yes, it is possible Trump gets reelected. While Democrats have the long-term demographic winds at their back, Republicans have a time machine: a consistent skew in ethnic and religious voter-turnout patterns that, in national elections, has the effect of turning back the demographic clock eight or more years.

I first stumbled over this Republican secret weapon while analyzing the political implications of the changing U.S. religious landscape. In the decades since Ronald Reagan’s pivotal election in 1980, describing the political behavior of religious groups has been a simple task. Majorities of white Christian groups—including white evangelical Protestants, white mainline Protestants, and white Catholics—have voted for Republican presidential candidates, while majorities of every other group—including nonwhite Protestant and Catholic Christians, non-Christian religious Americans, and the religiously unaffiliated—have voted for Democratic presidential candidates. The upshot: Any significant change in white Christians’ share of the electorate has major partisan implications.


Yes, white evangelical Christians are shrinking in number, but their turnout percentage in elections is getting larger, to the point where their overall share of the electorate now is still exactly what it was in 2008: 26% of all votes cast. 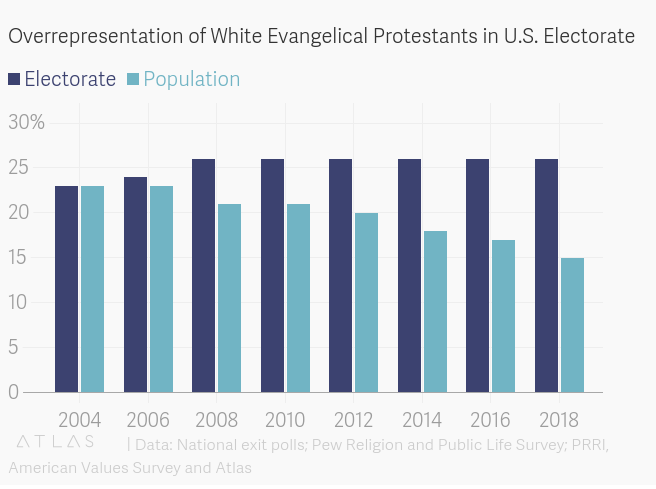 Even though white evangelical Christians made up only 15% of the population in 2018, so many of them voted that they accounted for over a quarter of all votes.  There's every reason to believe that this trend will continue in 2020.

It explains why Democrats have won back the House in areas with growing urban populations and suburban areas, but have lost 14 net Senate seats in the last five elections as blue voters are moving away from the Midwest and Rust Belt.

Should Republicans be able to hyper-gerrymander the majority of states in 2022 as I expect, those gains in the House go away for the above reason.

Yes, as Steve says, his base is fired up as much as it can go.  Yes, that base is shrinking.  But they vote in increasing numbers, and given the 100 million people who didn't vote in 2018, some of them have to be Trump's base that sat out.

And you know what?  They'll hold their nose and vote for his policies or hyper-nationalism and yes, white supremacy.  We know Trump's racism is not a dealbreaker with his base, it's a requirement.  Some sat out in 2016 because they were unsure if he could deliver the goods on immigration, judges, and owning the libs.

It depends on which trend wins out.  I'm nowhere near as sanguine to believe that Trump won't get at least 60 million votes, and probably 65 million, and that means a huge hunk of GOP candidates enabling Trump will get votes too, people don't split tickets anymore.

We have to turn out regardless.
Posted by Zandar Permalink 4:00:00 PM No comments:

Five years after he was murdered by the NYPD, any possible justice for Eric Garner has been buried by the vile, racist Trump regime and Trump's vile, racist Attorney General, William Barr.

A contentious, yearslong debate inside the Justice Department over whether to bring federal civil rights charges against an officer in the death of Eric Garner ended on Tuesday after Attorney General William P. Barr ordered that the case be dropped.

The United States attorney in Brooklyn, Richard P. Donoghue, announced the decision one day before the fifth anniversary of Mr. Garner’s death at the hands of police officers on Staten Island.

The case had sharply divided federal officials and prompted national protests over excessive force by the police.

Bystanders filmed the arrest on their cellphones, recording Mr. Garner as he gasped “I can’t breathe,” and his death was one of several fatal encounters between black people and the police that catalyzed the national Black Lives Matter movement.

His dying words became a rallying cry for demonstrations that led to changes in policing practices across the United States.

Still, a Staten Island grand jury declined to indict Officer Daniel Pantaleo, who was captured on a video wrapping his arm around Mr. Garner’s neck. The federal civil rights investigation dragged on for five years amid internal disputes in the Justice Department, under both President Barack Obama and President Trump.

In the end, Mr. Barr made the call not to seek a civil rights indictment against Officer Pantaleo, just before a deadline for filing some charges expired.

His intervention settled the disagreement between prosecutors in the civil rights division, which has pushed for an indictment, and Brooklyn prosecutors, who never believed the department could win such a case.


Garner's family is understandably furious, and the officer who killed him, Daniel Pantaleo, is going to get off scot free.  Understand that in America, every black person you know is only still alive because a police officer hasn't found an excuse yet to end them. That includes myself, for it is only by that grace that I'm still writing this blog, because my day has not come yet.

Eric Garner's day came five years ago because he was selling loose cigarettes.

And yes, we ask ourselves at every public interaction, every passing police cruiser, every time we see a beat cop on the street or at a store or restaurant or park, "Is this my time?"

Because we know that should it come, the odds of justice are minimal.  It fills me with anger.  “To be a Negro in this country and to be relatively conscious is to be in a rage almost all the time" as James Baldwin said.

Every day that I get up and I'm still here is one more day I beat those odds.