And on his first day on the job, Brazil's new leader Jair Bolsonaro goes straight to step seven on the Genocide Watch chart and begins singling out Brazil's indigenous, Afro-Brazilians, and the LGBTQ community for persecution.


Newly installed President Jair Bolsonaro issued executive orders targeting Brazil’s indigenous groups, descendants of slaves and the LGBT community in the first hours of his administration, moving quickly after a campaign in which the far-right leader said he would radically overhaul many aspects of life in Latin America’s largest nation.

One of the orders issued late Tuesday, hours after his inauguration, likely will make it all but impossible for new lands to be identified and demarcated for indigenous communities. Areas set aside for “Quilombolas,” as descendants of former slaves are known, are also affected by the decision.

Another order removed the concerns of the LGBT community from consideration by the new human rights ministry.

In a move favorable to his allies in agribusiness, which have criticized giving large swaths of lands to the indigenous, Bolsonaro transferred the responsibilities for delineating indigenous territories from the Justice Ministry to the Agriculture Ministry. The new agriculture minister, Tereza Cristina, is part of the agribusiness caucus in Brazil’s lower house and has opposed requests from native communities.
Bolsonaro, a former army captain and longtime congressman, said during his presidential campaign that he would stop making what he calls concessions to native Brazilians and quilombolas.

“Less than one million people live in those places isolated from the real Brazil,” Bolsonaro tweeted Wednesday. “They are explored and manipulated by nonprofits. Together we will integrate those citizens and give value to all Brazilians.”

The Justice Ministry previously handled demarcation of indigenous lands through the FUNAI agency, which also oversees other initiatives for indigenous communities such as health care, housing and language preservation. Bolsonaro’s order is raising uncertainties about FUNAI by shifting it to a new ministry for family, women and human rights that is headed by an ultraconservative evangelical pastor.

Observatorio do Clima, a network of 45 Brazilian civil society groups, said in a statement to The Associated Press that the executive orders “are only the first step on meeting Bolsonaro’s campaign promises of dismantling environmental governance, stripping indigenous peoples of their rights and opening up indigenous lands for business.”

“The attack on FUNAI goes beyond the wildest dreams of the rural caucus, who had tried for years to pass a constitutional amendment transferring the demarcation of indigenous lands from the president to Congress,” the nonprofit said. “Bolsonaro solved the problem by transferring them directly to farmers. Not even the military dictatorship, whose treatment of indigenous peoples was ghastly, went that far.”


So these groups are about to lose their rights and their lands, and the next step, history tells us, will be losing their lives.  It's something Donald Trump will be paying very close attention to.
Posted by Zandar Permalink 9:43:00 PM No comments:

Since wolrd powers are back to using threats and force now, there's no reason why China should be any different.  President Xi Jinping made it very clear today in his response to Taiwan's recent overtures on peaceful reunification that the "lost province" should prepare to rejoin Mother China or else.


China’s president, Xi Jinping, warned Taiwan that unification must be the ultimate goal of any talks over its future and that efforts to assert full independence could be met by armed force, laying out an unyielding position on Wednesday in his first major speech about the contested island democracy.

Mr. Xi outlined his stance one day after Taiwan’s president, Tsai Ing-wen, urged China to peacefully settle disputes over the island, whose 23 million people, she said, want to preserve their self-rule. But Beijing treats Taiwan as an illegitimate breakaway from Chinese rule, and Mr. Xi said unification was unstoppable as China rose.

“The country is growing strong, the nation is rejuvenating and unification between the two sides of the strait is the great trend of history,” Mr. Xi told officials, military officers and guests in the Great Hall of the People in central Beijing.

China would respect the Taiwanese people’s religious and legal freedoms in a unified “one country, two systems” framework, Mr. Xi said. But he warned that the profound political differences between Taiwan, a vibrant democracy, and China, a highly authoritarian government, were no excuse to reject unification.

“Different systems are not an obstacle to unification, and even less are they an excuse for separatism,” Mr. Xi said. “The private property, religious beliefs and legitimate rights and interests of Taiwanese compatriots will be fully assured.”

Mr. Xi also accompanied his offer of talks with a warning — one implicitly also aimed at the United States, which provides Taiwan with military equipment and the possibility of support in a crisis.

“We make no promise to abandon the use of force, and retain the option of taking all necessary measures,” Mr. Xi said in a section of the speech that drew rousing applause. Those options, he said, could be used against “intervention by external forces.”

The diverging positions staked out by Mr. Xi and Ms. Tsai have brought into focus how the disputed future of Taiwan remains a volatile question that could erupt into crisis, especially if either side misjudges the intentions of the other — or of the United States, a key ally that has strengthened support for Taiwan.

Taiwan’s Mainland Affairs Council, which handles relations with China, said it did not have an immediate comment on Mr. Xi’s speech.


Since misjudgement is the key feature of the Trump regime, should Washington get involved in this dispute, I almost guarantee it's going to get ugly.  It may get ugly anyway, as Xi has been playing hardball in the China Sea and in Africa during his term and there's no reason to believe that he'll settle for anything less than "reunification".

Add this to the world's potential hotspots in an era of America's influence in freefall.
Posted by Zandar Permalink 4:00:00 PM No comments: 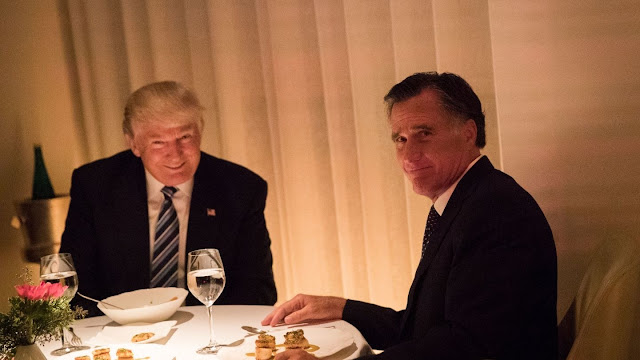 Good luck with that.
Posted by Zandar Permalink 10:00:00 AM No comments: