Last Call For The Island Of Misfit Americans, Con't

Pretty sure Donald Trump has no idea how much of a crisis is unfolding in Puerto Rico and the US Virgin Islands this week.  It may be months before the power is back on, and without power, other systems are inoperable to the point of producing a major public health disaster.

Horrifying stories of Hurricane Maria’s impact on Puerto Rico’s sickest and most vulnerable are now trickling in: a newborn who couldn’t get a scheduled surgery for her heart defectbecause the storm closed down her hospital, an elderly woman with diabetes struggling to keep her life-sustaining insulin cool.

One theme underlying many of these tales: Power outages throw the health care system into chaos. As Vox’s Brian Resnick explained, the storm knocked out power for the entire island, and five days later, most of Puerto Rico’s 3.4 million residents are still in the dark. Some hospitals are now running generators, but many households will have to wait up to six months for power to be restored.

We often take electricity for granted, and don’t typically associate it with public health. A lot of the ways they’re tied together are hidden. But when the power is out, it becomes painfully clear how much the medical, public health, and sanitation systems rely on the electrical grid to keep people safe and healthy.

Not long ago, researchers at Public Health England decided to scan the medical literatureto learn what was known about power outages and health with more extreme weather events threatening power systems around the world. They summarized their findings in the only systematic review of the research on the subject — and in this useful chart: 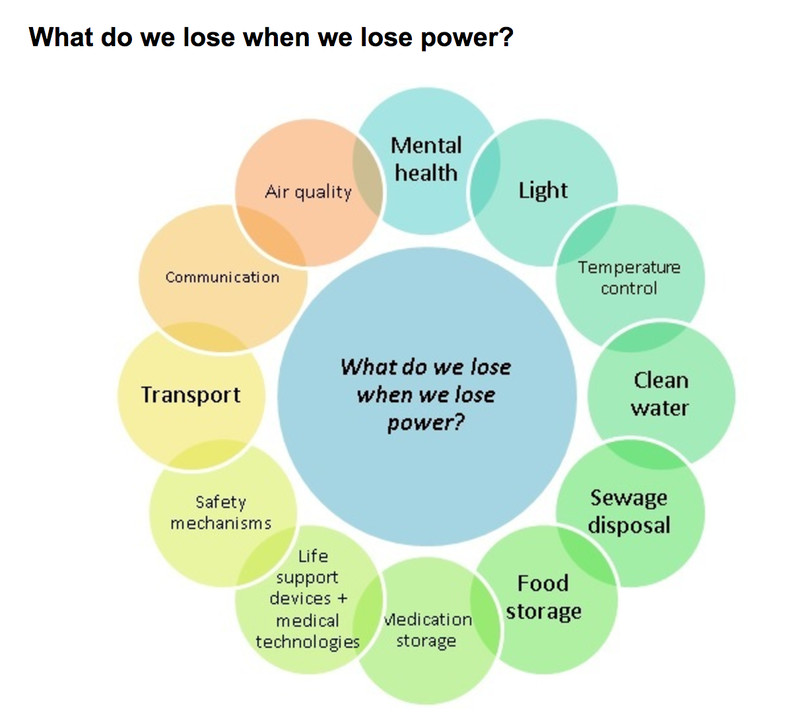 So imagine all the above systems down indefinitely: potable water, transportation, perishable food and medicine storage, communication, safety, and more.  On an island where all these systems are isolated and everything needed to repair these systems has to be shipped in.

Three and a half million people without these systems for months, best case scenario.

And Donald Goddamn Trump in charge of fixing it.

This is going to be an enduring nightmare.  Yes, flooded Houston and the wrecked Florida Keys face a similar situation, but the logistics of getting help to those affected is much easier than getting help to Puerto Rico or the US Virgin Islands right now.  There's not an immediate public safety crisis for millions brewing.  Yes, recovery for Houston and the Keys will take years, and there's a very good chance both those areas will get struck by another major hurricane again before they can fully recover.

But Puerto Rico, right now, today, is on the brink of disaster.  People aren't going to make it months or even weeks without help now, and Trump is too busy yelling at the teevee for it to matter to him.

This is precisely the scenario I expected would unfold with Trump running the show, and the results are going to be horrific.

Demand All, The Handle Vandals

The Trump regime wants the social media identities of every immigrant in America on file to keep an eye on them in real time, and this apparently includes naturalized citizens and permanent residents.


Federal officials are planning to collect social media information on all immigrants, including permanent residents and naturalized citizens, a move that has alarmed lawyers and privacy groups worried about how the information will be used.

DHS and US Citizenship and Immigration Services (USCIS) did not immediately respond to a request for comment.

Adam Schwartz, an attorney with the Electronic Frontier Foundation, which advocates for privacy and free expression, said the plan was disturbing.

"We see this as part of a larger process of high tech surveillance of immigrants and more and more people being subjected to social media screening," Schwartz told BuzzFeed News. "There's a growing trend at the Department of Homeland Security to be snooping on the social media of immigrants and foreigners and we think it's an invasion of privacy and deters freedom of speech."

This would also affect all US citizens who communicate with immigrants, Schwartz said, who could self censor out of fear that information they exchange with someone overseas could be misconstrued and used against them.


Of course these social media accounts will be flagged for permanent Trump regime surveillance, there's no other reason for DHS or Immigration Services to have this information.  It ridiculous enough that foreigners and immigrants to the US would need to surrender this info, but for naturalized US citizens to do it is crazy.

If that's found to be constitutional, there's no reason not to require this from every American. It's insane and ripe for abuse by both government and corporate actors, not to mention law enforcement and hey, hackers.

But this is where we are now, as we get a little more authoritarian and a little more fascist every day.
Posted by Zandar Permalink 4:00:00 PM No comments:

The Restaurant At The End Of America

While Trump's "friend" Luther Strange gets his ass handed to him by 18th century Judge Roy Moore in tonight's Alabama Senate primary runoff (Moore has a double-digit lead in nearly every poll) don't feel bad for Donald Trump. Tonight he will be at famous NYC eatery Le Cirque hosting a quarter-million-dollar-a-plate fundraiser for the RNC.


Some of the biggest names in U.S. finance and real estate are expected to gather at New York’s Le Cirque restaurant on Tuesday as President Donald Trump raises money for the Republican National Committee.

For $250,000 a couple, donors can attend a “private roundtable” with the president, while $100,000 will guarantee “VIP access,” according to people with knowledge of the preparations. The minimum donation is $35,000, and about 150 people will probably attend, these people said.


Good money if you can get it.  NYC hated Trump. Now they are coming to Donald to literally pay their respects just to eat dinner with him, and he loves every second of it.

Accompanying the president at Le Cirque will be Ronna McDaniel, the RNC chairwoman, and Steve Wynn, the casino mogul and RNC finance chairman, the people said, adding that Trump’s sons Eric and Donald Jr. also will be on hand. Many of the anticipated attendees, such as the executives Howard Lorber and Steve Witkoff, come from New York real-estate circles where the president’s career began, the people said.

John Catsimatidis, a New York billionaire with interests in real estate, energy and supermarkets, said he might swing by. While the president has “made some mistakes,” Catsimatidis said, donors are happy with the change in tone Trump brought to the White House.


Yes, this is about raising money for the 2018 fight, but this is more about Trump laying down the law that he's the most powerful man in the world right now.  And Wall Street is starting to get used to Trump being in power, and how it will be very good for them as the GOP tackles massive tax cuts for the wealthy.

They like Trump as long as he delivers, and Republicans haven't been in a position to deliver like this in decades.  Trump's the best chance Wall Street has had at unregulated greed since Reagan, and they know it.

They'll pay out the nose for it too.