And George Zimmerman is a free man tonight, exonerated in the death of Trayvon Martin.

George Zimmerman is not guilty of murder in the death of Trayvon Martin, a Florida jury decided late Saturday.


The fact that Zimmerman fired the bullet that killed Martin was never in question, but the verdict means the six-person jury had reasonable doubt that the shooting amounted to a criminal act.

The verdict caps a case that has inflamed passions for well over a year, much of it focused on race and gun rights.

The jury -- made up of all women -- had three choices: to find Zimmerman guilty of second-degree murder; to find him guilty of the lesser charge of manslaughter; or to find him not guilty.

The jurors deliberated for 16½ hours total, including 13 on Saturday alone, before delivering their verdict.


In the end the jury decided that Florida's stand your ground law meant that the killing of Martin was justified.  Regardless of the verdict tonight, Trayvon Martin is dead.  MoJo's Lauren Williams:

But it’s not over. Now that the verdict is in, here’s what could happen next.

Federal charges: The Department of Justice launched an investigation last March to investigate whether Martin’s shooting amounted to a federal hate crime—that is, if Zimmerman followed and killed Martin because he was black. In July 2012, the FBI released a statement saying that investigators had found no evidence that Zimmerman was motivated by racism. The July statement indicates that federal charges are highly unlikely, but the DOJ has not announced that the case is closed. It’s still being brought up as a post-trial possibility. NAACP president Benjamin Jealous, for instance, said Saturday on MSNBC that "there are still additional legal avenues. He could still be charged with federal civil rights charges."

Civil lawsuit: Martin’s family reached a settlement in April with the homeowners’ association of the subdivision where the killing occurred. The details of the settlement were not made public, but the Orlando Sentinel reported that the family was "said to" have been awarded at least $1 million. The suit did not include Zimmerman, but the family’s attorney Benjamin Crump has said that the family intends to sue their son’s killer at some point in the future. It’s not uncommon for families to seek a form of justice through civil courts, even when a the defendant is acquitted in criminal court. And the standards for judgments are different in such civil cases.

The public’s reaction: In the week leading to the verdict, speculation that people—specifically black people—would riot if Zimmerman were acquitted spread through the mainstream media, after taking off in the conservative press and cable news. What’s more likely, based on how Martin supporters have reacted initially—after the verdict was read, the crowd outside of the courthouse dispersed peacefully—is that protests (of the non-violent variety) against racial profiling will continue.


All important things to remember.
Posted by Zandar Permalink 10:48:00 PM No comments:

Jaeger And Kaiju Must Fight, It Is The Way Of All Things

In the year 2025, things aren't going so well for that whole "humanity" thing in Pacific Rim. 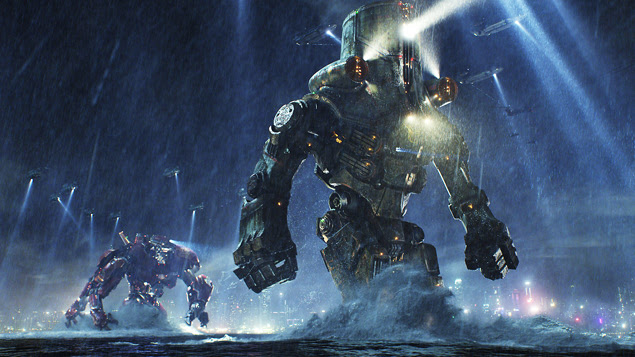 We're getting mauled by a race of giant monsters, Kaiju, coming out of an inter-dimensional rift in the bottom of the Pacific Ocean.  For the last dozen years or so the earth has fought back with Jaegers, massive robots piloted by neurally-linked pairs of brave souls.  The problem is the Kaiju are winning, coming through the rift bigger, badder, and more often and the Jaeger program, and the Pan-Pacific Defense Corps that runs it is about to be defunded as the final days of humanity draw near.

Enter our hero, Raleigh Beckett (Charlie Hunnam), a former Jaeger pilot who lost his brother halfway through this long Kaiju War.  With earth down to a handful of outclassed and outgunned Jaegers, PPDC Marshal Stacker Pentecost (yes, that's his name, and yes, he's played by Idris Elba) drags him out of anonymity in Alaska and to the final remaining Jaeger base in Hong Kong, with the plan to make a last-ditch effort to attack the rift itself and seal it, saving the planet.

If this seems like the plot of the most badass live-action anime you can think of (plus Ron Perlman) then yes, you're pretty much right on the mark.  Pacific Rim knows exactly who its audience is and opens up with slam-bang action, all the way through, as we see the Kaiju War through Beckett's eyes.  Mako Mori (Oscar-nominated Rinko Kikuchi), Pentecost's young protege', may be the only person able to link with Beckett and handle the pain of his loss while still being able to fire plasma cannon shots down the throats of rampaging Kaiju, and Drs. Geiszler and Gottlieb and (Charlie Day and Burn Gorman) round out the cast as the brains behind the robotic brawn.

Proust and Longfellow, this ain't.  But as far as giant robots with elbow-rocket assisted punching goes?  It's Shakespeare.   So far, this movie is the only thing coming close to Iron Man 3 in the summer fun department.
Posted by Zandar Permalink 6:10:00 PM 1 comment:

The Pitter-Pat Of Small Men

In a move that surprised precisely nobody, NC GOP Gov. Pat McCrory broke his campaign promise from just 9 months ago and will sign draconian NC House anti-choice measures into law, because Republicans have declared that women are all too stupid to be trusted with their own vaginas or something.  Also, motorcycle safety.

McCrory said he doesn’t consider the provisions in the House bill that increase regulation of abortion clinics to be in conflict with his campaign promise because the regulations simply need updating to ensure patient safety. The last time the state updated the regulations was in 1994.

“I will sign it because it doesn’t restrict further access and it’s safer, which was needed,” McCrory said in an interview in New Bern earlier Friday with a News 14 reporter, according to the TV station.

Last week, the Senate unexpectedly produced a new abortion bill that pulled together elements of three other bills and quickly passed it. On Monday, McCrory expressed reservations about the bill, telling reporters there was a distinction between safety measures and restrictions, and that he wanted to ensure women’s health was protected.

On Wednesday, he threatened to use his veto power for the first time if his concerns weren’t addressed. The announcement heartened abortion-rights supporters, but not for long. The House then crafted a new bill in consultation with the governor’s administration, which the full House approved Thursday.


So, at this point instead of the NC Senate deciding to close down all but one clinic in the state, McCrory can quietly close down all of them with even more draconian stuff.  After all, this is a guy who in the seven months since he took office has purged regulators from nearly every state department and replaced them with his own cronies, signed into law such drastic cuts in unemployment benefits that the state no longer qualifies for any federal unemployment dollars, moved to eliminate early voting and same-day voter registration, and named wealthy state Tea Party leader Art Pope as his budget director.

Yeah, McCrory won't totally screw over women with this bill.

There are not many differences between the House and Senate versions of the bill. The Senate bill would require abortion clinics to meet standards that are similar to outpatient surgery centers. Only one clinic in the state meets those stringent standards and 16 others could have to close because they couldn’t afford to upgrade.

The House bill orders the state Department of Health and Human Services to develop regulations that in some instances might be as stringent as outpatient surgery centers if applicable, “while not unduly restricting access.” The bill also allows the state to develop temporary rules without legislative approval, and eventually come up with permanent rules.

The House bill’s sponsors say that it is meant to be less restrictive than the Senate bill, but opponents say it is vague and could end up erecting more barriers to abortion clinics than the other bill, depending on how the law is interpreted.


And guess who now has total control over the state's Department of Health and Human Services?  Why, Pat McCrory, who purged those appointed by Democrats and installed his own guys.  Best part is he'll get away with it.  Or, he thinks he will.

How about it, North Carolina women?