Sen. Bernie Sanders appeared on Rachel Maddow's show last night and when asked about raising money and campaigning for downticket Dems in Congress, Sanders just shrugged the question off.

Sen. Bernie Sanders (I-VT) wouldn't say if he will turn his fundraising juggernaut toward the Democratic House and Senate campaign committees and down-ballot Democratic candidates in a Wednesday night interview on MSNBC's "The Rachel Maddow Show."

"Right now, our job is to, what I'm trying to do is win the Democratic nomination," Sanders said.

He said he is "blown away" by his campaign's small-dollar fundraising.

"Without that type of support, we would not be where we are right now," he said.

Host Rachel Maddow said rival Hillary Clinton has been fundraising for her campaign as well as the Democratic Party. Will the Sanders campaign begin this type of fundraising as well, Maddow asked.

"We'll see," Sanders said. "Right now, our focus is on winning the nomination."


Wrong answer, Bernie.  But thanks for letting everyone know that you really aren't in it for anyone but yourself.

Will I vote for him in Kentucky's primary in May?

The anti-choice industry is furious with Donald Trump's comments on MSNBC yesterday that women deserve "some sort of punishment" for getting abortions once the procedure is criminalized by the GOP.


After saying on Wednesday that he believes there should be punishment for women who undergo abortions if the procedure was outlawed, Republican presidential candidate Donald Trump walked back the comment hours later.

In an exclusive interview with MSNBC's Chris Matthews, the GOP front-runner described himself multiple times as "pro-life" but struggled to define what the legal ramifications of that position should be. When continually pressed for what the answer is regarding punishing women who would break any theoretical ban, Trump said the "answer is that there has to be some form of punishment, yeah."

Later in the day, his campaign released a statement refocusing who would be punished should abortion become illegal. "If Congress were to pass legislation making abortion illegal and the federal courts upheld this legislation, or any state were permitted to ban abortion under state and federal law, the doctor or any other person performing this illegal act upon a woman would be held legally responsible, not the woman," the statement said. "The woman is a victim in this case as is the life in her womb. My position has not changed — like Ronald Reagan, I am pro-life with exceptions."


But the damage has been done, and Trump has given away the endgame of the anti-choice people. Of course the goal is to punish women for seeking abortion, and it always has been. Red states make trying to get an abortion as crushing and as difficult as possible to restrict access to it while the anti-choice advocates sadly cluck their tongues and say women and the unborn have to be helped.  Actually providing that help doesn't happen, these "loose hussies" are on their own unless they repent and the nation's churches take pity on them, for surely child and family services are being dismantled across the country by Republicans seeking to trap women in squalor.

Trump coming along and reminding everyone that the real goal has always been to criminalize abortion and women having sex for anything other than procreation blows a hole in the whole facade, and the anti-choice forces know it.  You can't say you're worried about protecting the mother and unborn child if you're willing to admit the goal is to have women so scared of going to prison over miscarriages that they are afraid to have sex. The tacit understanding is that only those women get punished for wanting an abortion, the rest quietly have the procedure because they're "responsible people" who don't abuse the "availability" of it.  The notion that all women get punished, that there's not exceptions made for the right women to have one, well that gives away the game.

If it was somehow possible before for Trump to get zero percent of the women's vote in 2016, it's even more possible now. Trump has single-handedly destroyed the Republican defense of "we're not leading a War on Women!"

And they're furious at him for it for good reason.

We’re now at the point in the nominating process where it is, er, crystal clear that Hillary Clinton will end up being the Democratic candidate, and Donald Trump, while not at all the certain winner, is the leading candidate to become the Republican nominee. So it’s time to adjust our 2016 electoral map for the first time since we rolled out our initial ratings last May. That map, shown below as Map 1, reflected a generic Democrat versus Republican matchup, and it depicted a close, competitive general election.

The new map, as you will see, does not show a close and competitive general election. The Republicans now find themselves in a deep hole. 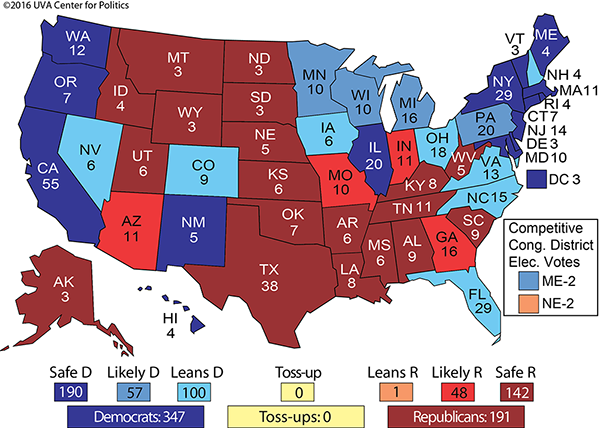 Imagine Trump screwing up so badly that Clinton actually outperforms either of Obama's presidential wins.  Not hard to imagine if he keeps giving the game away like this.  After all, he's now unpopular even with a majority of white men. Trump is going to wreck the party before he's done.  Get the popcorn and watch it burn.
Posted by Zandar Permalink 4:00:00 PM No comments:

In The (Septic) Tank

So while Donald Trump's campaign manager is being charged with battery for physically grabbing a member of the press and searching for blame as to how Trump rose to GOP frontrunner status amid billions in nonstop free press coverage and call-in interviews, it turns out that what the Village really can't stand is that Barack Obama guy daring to call them out on the mess. Politico's Jack Shafer:


The last person in the world who should be lecturing journalists on how to do journalism is President Barack Obama. Yet there Obama was Monday night at a journalism award ceremony, yodeling banalities about the role of a press in a free society, moaning over the dangers posed by “he said/she said” reporting, and—to the delight of the assembled audience—attacking Donald Trump in every way but name. The press-heavy crowd, convened by Syracuse University’s S.I. Newhouse School of Public Communications to give the Toner Prize for Excellence in Political Reporting to Alec MacGillis, clapped at Obama’s 30-minute address, encouraging his best Trump-baiting lines about “free media” and the dangers of “false equivalence.”

What they should have done is bombard Obama with rotten fruit or ripped him with raspberries for his hypocrisy.

How do we hate Obama’s treatment of the press? Let me count the ways. Under his administration, the U.S. government has set a new record for withholding Freedom of Information Act requests, according to a recent Associated Press investigation. FOIA gives the public and press an irreplaceable view into the workings of the executive branch. Without timely release of government documents and data, vital questions can’t be answered and stories can’t be written.

Obama’s “Insider Threat Program” has turned employees across the government—from the Peace Corps to the Social Security Administration to the Department of Agriculture—into information-squelching snitches. If this isn’t Trumpian behavior, I don’t know what is.

“Obama hates the press,” New York Times national security reporter James Risen said not long ago, “and he hates leaks.” AP Washington Bureau Chief Sally Buzbee has decried the “day-to-day intimidation of sources” by the Obama administration, judging it worse than the Bush administration on that score. And in a 2013 piece, POLITICO’s Jim VandeHei and Mike Allen documented Obama’s mastery of “limiting, shaping and manipulating media coverage of himself and his White House.”

As ProPublica has reported, at the same time the Obama administration has been paying lip service to protecting whistleblowers, it has pursued national security leaks to the press with a vehemence unmatched by any previous administration, using the Espionage Act to prosecute whistleblowers who leak to journalists more times than all previous administrations combined. Obama holds infrequent news conferences, and he wastes reporters’ time by refraining from answering questions with any candor. He claims to helm “the most transparent administration in history,” while bending government policies and practices toward secrecy.

“The administration’s war on leaks and other efforts to control information are the most aggressive I’ve seen since the Nixon administration,” wrote Leonard Downie Jr. in a Committee to Protect Journalists report. And it’s not just Downie complaining. You could break Google by asking it to list all the top journalists who regard the Obama administration as Press Enemy No. 1.

The deeper you study Obama’s relationship with the press, the more you want to ask what business he has giving out a press award. Was Trump himself busy that night?


What really bothers the Village about all this "secrecy" and "manipulation" is the Obama administration realizing pretty early on that this whole internet thing is pretty useful for getting out the information the White House wants to get out, and doing so without the Village pearl-clutchers getting in the way.

Particularly since the massive damage caused to American national security by Edward Snowden and friends, you'd be forgiven for thinking the White House might want to be more careful with leaks and information in general, which it is.

What the Obama administration is not doing is physically battering journalists, insulting them by name on Twitter, citing them to rally angry campaign crowds, and making public enemies lists of them like Trump (for starters).

Considering how complicit the media is with Trump and his other enablers, it's a wonder Shafer doesn't fall over from the weight of his own hypocrisy.
Posted by Zandar Permalink 10:00:00 AM No comments: