Last Call To Sink The GOP

Alex Sink, that is.  And Florida's special election for the vacant seat of the late Republican Rep. Bill Young could very well go to the Democrats in March.

More than a dozen operatives and officials from both parties interviewed by POLITICO were almost unanimous that Democrat Alex Sink, her party’s 2010 nominee for Florida governor, has emerged as the unambiguous favorite in the race. The primary, in which Sink has run unopposed as a group of Republicans have slugged it out, is on Tuesday. The general election is on March 11.

Democrats need to gain 17 seats to win the House majority in November. An early win in Florida would give the party ammunition to argue they‘re in for a better year than political handicappers expect. A loss, on the other hand, would be widely seen as a serious blow: On Thursday, political analyst Stu Rothenberg penned a piece in Roll Call titled, “The Race Democrats Can’t Afford to Lose.”

Republicans admit they are increasingly alarmed about the prospect of losing the St. Petersburg-area district. Democrats, after enduring a heartbreaking loss in a 2013 South Carolina special election they thought was theirs, are carefully managing expectations but can smell victory.

We need all the D's who can win that we can get, and this is a seat we can win.

Among Republicans there is unhappiness with the candidates in Tuesday’s GOP primary and disappointment that many of the party’s best and brightest who long had been thought of as successors to Young didn’t run.

David Jolly, who’s seen as the favorite to get the GOP nod, is a Washington lobbyist — a profession that leaves him vulnerable to being portrayed as a hired gun and insider. State Rep. Kathleen Peters began the race with plenty of promise, winning endorsements from a group of House GOP women eager to expand their ranks. But some Republicans believe her campaign has fizzled, with the candidate scoring low in recent polls. Mark Bircher, a little-known Iraq War veteran, has struggled to raise money.

Or maybe the problem is the GOP brand has been so tarnished by extremist nutcases like Allen West and Rick Scott that Florida is tired of electing them.  Go figure.

The Villagers' Role In The Boss Fantasy

Expanding more on my last post, the entire GOP fantasy involving Chris Christie centers around the fact his dishonest and mean behavior as Governor of New Jersey made him "authentic" and "a strong leader".  Now that the wheels are coming off the Christie bandwagon, we get pieces like this from WIN THE MORNING Magazine: "15 Chris Christie Controversies You Missed"

Democrats in New Jersey have been celebrating what you might call Chris Christiemas this week. When documents were released strongly suggesting that senior members of Governor Christie’s staff were behind the George Washington Bridge lane closures in Fort Lee, the Gov’s ideological opponents breathed a sigh of relief. Christie’s unrivaled political skill and, as Matt Katz outlined here in November, ability to drive a narrative of his choosing, have meant that until now, The Story of Chris Christie As Told By The National Media is one that Christie has largely written himself. As one New Jersey Democratic strategist told me, “the press had basically inaugurated him already.” But Christie’s political career has been riddled with controversies big and small, most of which have been paid little attention by those outside the Garden State. And while perhaps none of these kerfuffles placed anyone in imminent danger quite like Bridgegate did, at least a few of them might have spelled the end of another, less media savvy politician’s career.


And yet Politico was one of those very "national media" outlets that the Democrats in New Jersey are rightfully complaining about, pretending they had no idea why anyone would find fault in the Villagers' love of the man.

Their mendacious lack of awareness (bordering on being a three-year-old with chocolate stains on his face who is asked what happened to the chocolate chip cookies on the table, responds "I don't know!") is equaled only by the mendacity of the same level in the Christie camp's response to the bridge scandal.

Keep in mind Christie never had a chance in 2016, anyway.  There's a reason why Romney passed him over.
Posted by Zandar Permalink 4:00:00 PM No comments:

The Bridge Over Troubled Christie Is Now On Fire

After years of propping the him up as "authentic" and "bipartisan" suddenly the Villagers are asking questions about why GOP NJ Gov. Chris Christie may not be so honest.

Just days after dismissing two top advisers for their roles in the George Washington Bridge scandal, New Jersey Gov. Chris Christie is facing questions over the use of Superstorm Sandy relief funds.

CNN has learned that federal officials are investigating whether Christie improperly used those relief funds to produce tourism ads that starred him and his family.

The news couldn't come at a worse time for the scandal-plagued Republican, who is facing two probes into whether his staff tied up traffic near the country's busiest bridge to punish a Democratic mayor who refused to endorse his successful re-election bid.

If the Sandy inquiry finds any wrongdoing, it could prove even more damaging to Christie's national ambitions. His performance during and after the superstorm has been widely praised and is a fundamental part of his straight-shooting political brand.

In the new probe, federal auditors will examine New Jersey's use of $25 million in Sandy relief funds for a marketing campaign to promote tourism at the Jersey Shore after Sandy decimated the state's coastline in late 2012, New Jersey Democratic Rep. Frank Pallone told CNN.

All the local shenanigans that supporters dismissed about the guy as "non-issues" are suddenly real problems in his now "scandal-plagued" administration.  It's funny now that Christie's brand is permanently damaged how all of a sudden this stuff demands closer inspection.  People are shocked that Christie would do anything to turn his response to Hurricane Sandy into political gold, even possibly break the law? 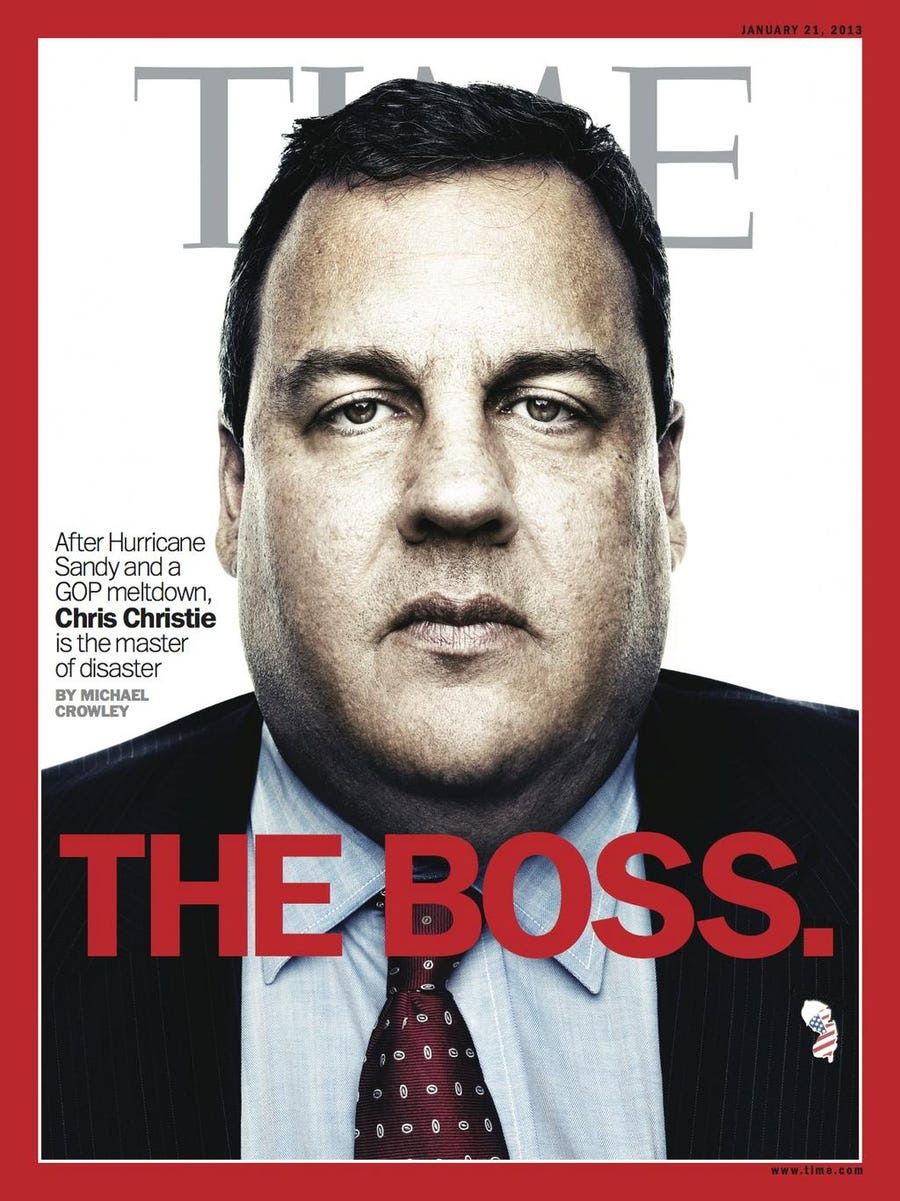 Now why would Christie risk his image like that?  Oh yes, a year ago, he was THE BOSS.  Now he's just in trouble.

Email ThisBlogThis!Share to TwitterShare to FacebookShare to Pinterest
StupidiTags(tm): Chris Christie, GOP Stupidity, Someone Get Me Olivia Pope On The Line