Last Call For Meanwhile In Bevinstan...

Kentucky GOP Gov. Matt Bevin is throwing in the towel on his Medicaid dental and vision cuts after massive outrage from the hundreds of thousands of people who lost coverage and a defeat in federal court.


In a surprise reversal, Kentucky officials have announced the state will rescind Medicaid cuts that eliminated dental, vision and non-emergency transportation services for nearly 400,000 Kentuckians.

In a statement released late Thursday, the Cabinet for Health and Family Services announced that "we have begun the process to reinstate vision and dental coverage, as well as non-emergency transportation services."

The statement provided no explanation for reversing cuts officials had insisted were necessary as recently as Wednesday in testimony before a state legislative committee.

It came shortly after the Courier Journal reported sources had said the administration of Gov. Matt Bevin was working on an announcement that the cuts were being rescinded.

Advocates were delighted with the prospect that dental benefits would be restored.

"That is such good news," said Jennifer Hasch, manager of dental services for the Shawnee Christian Healthcare Center in West Louisville. "I think people are going to be thrilled. I think it's weight lifted for our office, both for our patient population and our team."

State Rep. Joni Jenkins, a Shively Democrat, who had criticized the governor for cutting the benefits, said she welcomes the news.

Sources told the Courier Journal that the state plans to reinstate the benefits by Aug. 1, but will make them retroactive to July 1, so people can visit the dentist or eye doctor during July and the provider can bill Medicaid for the services. The sources asked not to be identified, saying they were not authorized to comment.

The abrupt cuts effective July 1 created an uproar across Kentucky, catching patients and providers off guard, causing the most disruption in dental services. Dentists were forced to turn away hundreds of patients who had lost benefits overnight, many suffering from pain from severe infection and dental abscesses.

While health advocates say all three services cut—dental, vision and transportation are important—the loss of dental services were most critical because of the very poor dental health of some Kentuckians and the fact that dental abscesses and infection can be life-threatening.


Needless to say, the local news coverage over the last couple of weeks has been brutal.  The state's top health official, Health and Family Services Cabinet Secretary Adam Meier, blew his stack in an angry letter to Kentucky Democrats blaming them and the Louisville Courier-Journal coverage of the cuts for "false information".

It's funny, because Bevin's health care reforms and been nothing but disaster after disaster, with the Kynect elimination and its replacement with the awful benefind system, an online benefits portal so badly designed that tens of thousands lost benefits that they qualified for.  Now these cuts have been rolled back because Republicans are getting crushed politically, and Bevin won't admit that, but it's true.

This is good for now, but I can't help but think that Bevin will try again.
Posted by Zandar Permalink 8:06:00 PM No comments:

As I said yesterday, there's plenty of evidence that Trump is going along with Putin because his ego won't allow him to admit the Russians helped him, and that he likes Putin and his autocracy, something he imagines he can have here in America.  But that doesn't mean that the evidence that Putin has compromising material on Trump should be dismissed either, as they aren't mutually exclusive, and besides, the NY Times dropped a bombshell last night that heavily favors the theory that both conditions are true.

The evidence included texts and emails from Russian military officers and information gleaned from a top-secret source close to Mr. Putin, who had described to the C.I.A. how the Kremlin decided to execute its campaign of hacking and disinformation.

Mr. Trump sounded grudgingly convinced, according to several people who attended the intelligence briefing. But ever since, Mr. Trump has tried to cloud the very clear findings that he received on Jan. 6, 2017, which his own intelligence leaders have unanimously endorsed.

The shifting narrative underscores the degree to which Mr. Trump regularly picks and chooses intelligence to suit his political purposes. That has never been more clear than this week.


I've long suspected that Trump was briefed on the Russian attacks at some point during the transition before he was sworn in or soon after, but the story gives us an exact date (January 6, 2017) and includes the fact that Trump was outright told, using intelligence from the crown jewels of specific CIA methods and means themselves as evidence, that Putin ordered these attacks as well.

America got a nice chunk of that briefing as an unclassified version was released to the public that day.  I wrote about it on January 7th last year, and how Trump supporters immediately dismissed it on January 8.

That hasn't changed.  What did change was that the question of "What did Trump know and when did he know it?" has been definitively answered.

The Jan. 6, 2017, meeting, held at Trump Tower, was a prime example. He was briefed that day by John O. Brennan, the C.I.A. director; James R. Clapper Jr., the director of national intelligence; and Adm. Michael S. Rogers, the director of the National Security Agency and the commander of United States Cyber Command.

The F.B.I. director, James B. Comey, was also there; after the formal briefing, he privately told Mr. Trump about the “Steele dossier.” That report, by a former British intelligence officer, included uncorroborated salacious stories of Mr. Trump’s activities during a visit to Moscow, which he denied.

According to nearly a dozen people who either attended the meeting with the president-elect or were later briefed on it, the four primary intelligence officials described the streams of intelligence that convinced them of Mr. Putin’s role in the election interference.

They included stolen emails from the Democratic National Committee that had been seen in Russian military intelligence networks by the British, Dutch and American intelligence services. Officers of the Russian intelligence agency formerly known as the G.R.U. had plotted with groups like WikiLeaks on how to release the email stash.


Again, Trump was outright told by America's top intelligence officers that the Russians hacked the Clinton campaign with the intent of damaging her chances in the 2016 presidential contest, and that they were working with WikiLeaks.  Trump was also told of the Steele Dossier.  Finally, Trump was told the exact case behind why the US intelligence community believed Putin gave these orders.

Since we now know when the briefing was, we now know that Trump's guilty-looking response came the same day.

After the briefings, Mr. Trump issued a statement later that day that sought to spread the blame for the meddling. He said “Russia, China and other countries, outside groups and countries” were launching cyberattacks against American government, businesses and political organizations — including the D.N.C.

Still, Mr. Trump said in his statement, “there was absolutely no effect on the outcome of the election.”

Mr. Brennan later told Congress that he had no doubt where the attacks were coming from.

“I was convinced in the summer that the Russians were trying to interfere in the election,” he said in testimony in May 2017. “And they were very aggressive.”

For Mr. Trump, the messengers were as much a part of the problem as the message they delivered.

Mr. Brennan and Mr. Clapper were both Obama administration appointees who left the government the day Mr. Trump was inaugurated. The new president soon took to portraying them as political hacks who had warped the intelligence to provide Democrats with an excuse for Mrs. Clinton’s loss in the election.

Mr. Comey fared little better. He was fired in May 2017 after refusing to pledge his loyalty to Mr. Trump and pushing forward on the federal investigation into whether the Trump campaign had cooperated with Russia’s election interference.


Former Obama DNI James Clapper is confirming that briefing happened this morning. And let's keep in mind that instead of supporting the finding and cooperating, Trump immediately chose to attack the people who told him Putin was behind the hacking, and to mislead America about it even before he took office two weeks later.  Just a week after that briefing was held, GOP Sen. Richard Burr opened up the Senate Intelligence Committee investigation into the Russian attacks.

It was also the same time period that heavy suspicion started falling on Michael Flynn, then still Trump's incoming National Security Adviser, for his multiple phone calls to Russian Ambassador Sergei Kislyak on the day then President Obama expelled 35 Russian diplomats in December 2016.

So what does all this mean?  Whenever Trump has publicly gone after the US intelligence community, they have fired back with a pretty solid leak precisely laying out why Trump is full of horseshit on the matter.  This time is similar, but now the stakes are high enough after Trump's performance in Helsinki that they are willing to put specific information like this out in the open in order to refute Trump's latest lies.

There's no doubt left that Trump knew Putin was behind the attacks and the propaganda.  And immediately, Trump started lying about it to the American public.

I'd like to know when Mitch McConnell and Paul Ryan were told of this, especially McConnell.  McConnell doesn't get nearly enough flack for blocking any efforts to make this a public bipartisan statement before the election.

But there's now no question that Trump knew.  Does it matter, however?  As I've said, it'll only matter if Trump's hold on his cult can be broken.  There's no evidence that this will ever happen, even now. 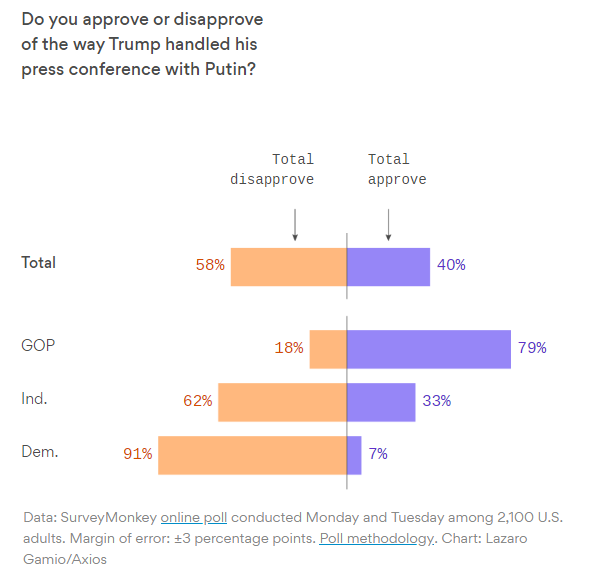 79% of Republicans approve of Trump's summit disaster.  85% still say the Russian investigation is a distraction.  And these people will go out in November and pull the lever for Republicans and demand that Congress protect "our leader".  CBS News found similar numbers, with 68% of Republicans approving of Trump's Helsinki performance, and in fact 42% saying that they simply believe that US intelligence agencies are lying about the entire Russia investigation.  Expect that figure to go up dramatically and soon.

Any Republican who speaks out now will be crucified on national television and none of them want to be that martyr, because they crave power more than patriotism.  Trump is already parroting Russian talking points that all Democrats and any right-wing critics must want an open war with Russia.  Tens of millions of Republican voters will agree and demand continued congressional GOP cowardice, and they will get it.

And we will continue to be doomed until that wall breaks, if it ever does.  But never forget, Trump knew.  Which means all the Republican leadership knew too, and they went along 100%.
Posted by Zandar Permalink 10:00:00 AM No comments: