Sometimes being neighbor to a bunch of, well, Americans, isn't so much fun.


Five people were killed and two critically injured in a school shooting in a remote part of Saskatchewan on Friday and a male suspect was in custody, Canadian Prime Minister Justin Trudeau and police said.


Trudeau did not give a motivation for the shooting in La Loche, about 600 km (375 miles) north of the city of Saskatoon.

"Obviously this is every parent's worst nightmare," said Trudeau, who was in Davos, Switzerland, for the annual World Economic Forum.

Mass shootings are relatively rare in Canada, which has stricter gun laws than the United States. With five dead, La Loche would be the country's worst school shooting since 14 college students were killed at Montreal's Ecole Polytechnique in 1989.

The shooting occurred in the high school, called the Dene Building, and another location in Saskatchewan, Trudeau and Canadian police said. The school remained on lockdown and the total number injured is not yet known, police said.

Police took the suspect into custody outside the school and seized a gun.

La Loche acting Mayor Kevin Janvier told the Canadian Press the incident may have started at the suspect's home.

“I’m not 100 percent sure what’s actually happened but it started at home and ended at the school," Janvier said.

Among Canada’s provinces, Saskatchewan had the highest rate of police-reported family violence in 2014, double the national rate of 243 incidents per 100,000 people, according to a Statistics Canada report on Thursday.


We have what seems like weekly school shootings here in Gunmerica.  In a country like Canada, opening fire on students is still considered a horrible, shocking act, where one political party isn't spouting inane nonsense like "if only school personnel and students had guns to defend themselves!"

It Was A Monster Mash

TNR's Jeet Heer points out the irony in National Review devoting an entire issue to stopping Donald Trump's campaign, as the magazine is largely responsible for the rise of Trump's arrogant, white supremacist know-nothingism anyway.

Decades from now, when historians try to figure out the genealogy of Trumpism, they will have to pay careful attention to the pages of National Review in the 1980s and 1990s, when a crucial debate was being played out between neo-conservatives and paleo-conservatives. Although National Review ultimately sided with the neo-conservatives, it gave ample room to such paleo-conservative voices as Joseph Sobran, Peter Brimelow, John O’Sullivan, and Samuel T. Francis. Even after these writers were purged from the magazine, the white identity politics they argued for was taken up by other National Review writers, albeit in more muted and coded form. This paleo-con tradition created the idea of a politics centered around immigration restriction and a more robustly nationalist foreign policy (including trade policy). Many of these writers seeded the ideas that helped form the alt-right, which is the faction on the right that is most enthusiastic for Trump.

In truth, the relationship between National Review and Donald Trump is like that of Victor Frankenstein and his monster. Horror-stricken by what the monster is doing, Frankenstein might deny his own creation and say that it has a will of its own. But without Frankenstein, there is no monster. And without a conservative movement that fostered and indulged white identity politics, there is no Donald Trump.


And this is the vital point here that needs to be made: someone like Trump coming along and running as the unbridled, freely decoded agent of conservative Republican dog-whistle racism was always going to be seen as "someone who is brave enough to say what we're thinking" and be wildly popular among the "Well, I'm not racist but..." crowd, especially after America elected a black man to be President of the United States.

Trump, or someone like him, was absolutely inevitable.  And for National Review's all-star team of dipsticks, pretending they're against the rough beast they created slouching towards Washington is a bad joke on the rest of humanity. 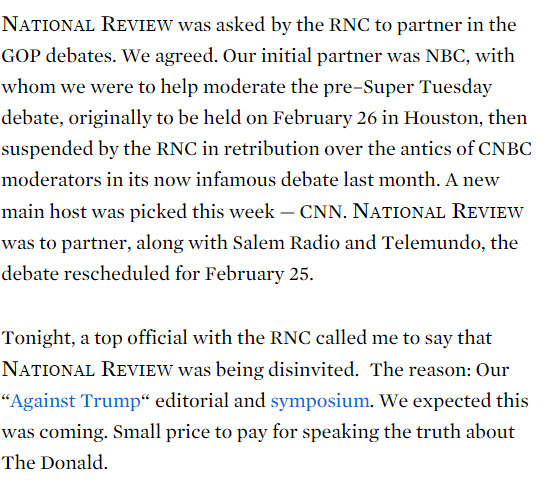 Water We Waiting For In Flint, Con't

The New York Times analysis of the timeline of the decisions made by the city's emergency managers and by GOP Gov. Rick Snyder show nearly outright indifference to human life at best, and suggests letting citizens be poisoned indiscriminately in the name of cost-benefit analysis at worst.

A top aide to Michigan’s governor referred to people raising questions about the quality of Flint’s water as an “anti-everything group.” Other critics were accused of turning complaints about water into a “political football.” And worrisome findings about lead by a concerned pediatrician were dismissed as “data,” in quotes.

That view of how the administration of Gov. Rick Snyder initially dealt with the water crisis in the poverty-stricken, black-majority city of Flint emerged from 274 pages of emails, made public by the governor on Wednesday.

The correspondence records mounting complaints by the public and elected officials, as well as growing irritation by state officials over the reluctance to accept their assurances.

It was not until late in 2015, after months of complaints, that state officials finally conceded what critics had been contending: that Flint was in the midst of a major public health emergency, as tap water pouring into families’ homes contained enough lead to show up in the blood of dozens of people in the city. Even small amounts of lead could cause lasting health and developmental problems in children.


And the email records that Snyder has released are a redacted mess.

The emails were released late in the day, after Mr. Snyder’s State of the State address Tuesday night in which he profusely apologized to the residents of Flint and promised to help remedy the problem and get to the bottom of how it occurred. The Michigan House on Wednesday approved $28 million requested by the governor to assist the city.

Though Mr. Snyder issued the emails as part of an effort to reveal the administration’s transparency on the matter, the documents provide a glimpse of state leaders who were at times dismissive of the concerns of residents, seemed eager to place responsibility with local government and, even as the scientific testing was hinting at a larger problem, were reluctant to acknowledge it.

The messages show that from the moment Flint decided to draw its water from a new source, the Flint River, officials were discounting concerns about its quality and celebrating a change meant to save the cash-starved city millions of dollars. From 2011 to 2015, Flint was in state receivership, its finances controlled by a succession of four emergency managers appointed by Mr. Snyder’s administration.

That upbeat mood lasted for months, even as residents began complaining about the new water’s foul odor, odd color and strange health effects, and began showing up at events with “jugs of brownish water.”


It's amazing what happens when you take control of government, and make sure it doesn't work, then surprise, government doesn't work.  It's so bad that even House Republicans  want a little chat with him.

A U.S. House committee is expected to hold a hearing Wednesday, Feb. 3, on the Flint water crisis and the government’s response to high lead levels in drinking water there, U.S. Rep. Brenda Lawrence’s office said Thursday.

And Michigan Gov. Rick Snyder, who has apologized for the state’s handling of reports of high lead levels in Flint’s drinking water after it switched to the Flint River as its water source, is expected to be among those invited to testify before the House Oversight and Government Reform Committee.


Yep, it's the Rep. Jason Chaffetz show, but I'm betting Ranking Democrat Elijah Cummings has a few choice words too.
Posted by Zandar Permalink 10:00:00 AM No comments: