Last Call For The Johnny Volcano And Huckleberry Graham Show

It is a truism to say there is no military solution to ISIS. Any strategy must, of course, be comprehensive. It must squeeze ISIS’ finances. It requires an inclusive government in Baghdad that shares power and wealth with Iraqi Sunnis, rather than pushing them toward ISIS. It requires an end to the conflict in Syria, and a political transition there, because the regime of President Bashar al-Assad will never be a reliable partner against ISIS; in fact, it has abetted the rise of ISIS, just as it facilitated the terrorism of ISIS’ predecessor, Al Qaeda in Iraq. A strategy to counter ISIS also requires a regional approach to mobilize America’s partners in a coordinated, multilateral effort.

But ultimately, ISIS is a military force, and it must be confronted militarily. Mr. Obama has begun to take military actions against ISIS in Iraq, but they have been tactical and reactive half-measures. Continuing to confront ISIS in Iraq, but not in Syria, would be fighting with one hand tied behind our back. We need a military plan to defeat ISIS, wherever it is.


So basically McCain and Graham want another war, and expect President Obama to be the one to explain to America why we're going to blow another couple trillion dollars and send in hundreds of thousands of troops to fight this year's model of Al Qaeda.  Because that worked so well over the last decade.

There's no military solution to ISIS, but we need military force to stop ISIS.  Jesus.  We dodged a hurricane's worth of anvils in 2008, and you will never convince me otherwise.
Posted by Zandar Permalink 9:21:00 PM No comments:

The issue of women in video gaming doesn't get addressed nearly as much as it should, despite 48% of gamers being women and 36% are women over 18.  Women who point out that the industry is terribly unkind to the image of women as a whole are not treated well, and in fact recently such treatment has erupted into a full-blown rift in the gaming industry press.

Some good background on this story comes from The Escapist, but it boils down to this:  gaming critic Anita Sarkeesian, who has made a series of YouTube videos pointing out the ridiculously sexist tropes in gaming over the last two years, released her latest video late last month in the center of a controversy over game designer Zoe Quinn, who was accused of sleeping with a game reviewer in order to secure a favorable review for her game.  The reaction from a bunch of snot-nosed frat boy Dudebros with computer skills was precisely what you'd expect:  Sarkeesian was harassed and her life threatened to the point where she no longer felt safe in her own home.  Adi Robertson at The Verge:

This is an unusual low in the Anita Sarkeesian saga, but death threats in general are more or less par for the course for many women (and men) online. They can easily cross the line from bluster to menace — UK journalist Laurie Penny, for instance, contacted police in 2013 after being sent a very specific bomb threat. In this case, the vitriol might have been compounded by the support her latest video received from popular developers and media figures. Joss Whedon and William Gibson, among others, mentioned it, and Tim Schafer of Double Fine — known for Psychonauts and the Kickstarter-funded Broken Age — spent several hours fielding responses after urging everyone in game development to watch it "from start to finish."

It's also coming on the heels of another woman-focused gaming community tempest regardingDepression Quest developer Zoe Quinn, who internet denizens have accused of starting an affair with a games journalist (who never reviewed her game and, as far as I can tell, mentioned her in precisely one piece, which was written before they're supposed to have started dating) in order to secure favorable press for her non-traditional text game. The "corruption" allegations Quinn's critics put forward have started a discussion about how to handle friendships and crowdfunding support within a relatively small community of writers and developers. Our sister site Polygon updated its guidelines and now asks reporters to state if they have given crowdfunded support to developers through the Patreon service, and Kotaku banned such contributions outright. Intriguingly, the harassment and threats sent as part of this anti-corruption campaign seem to have focused mostly on Quinn herself, not the male journalist whose integrity would actually have been compromised by said corruption. 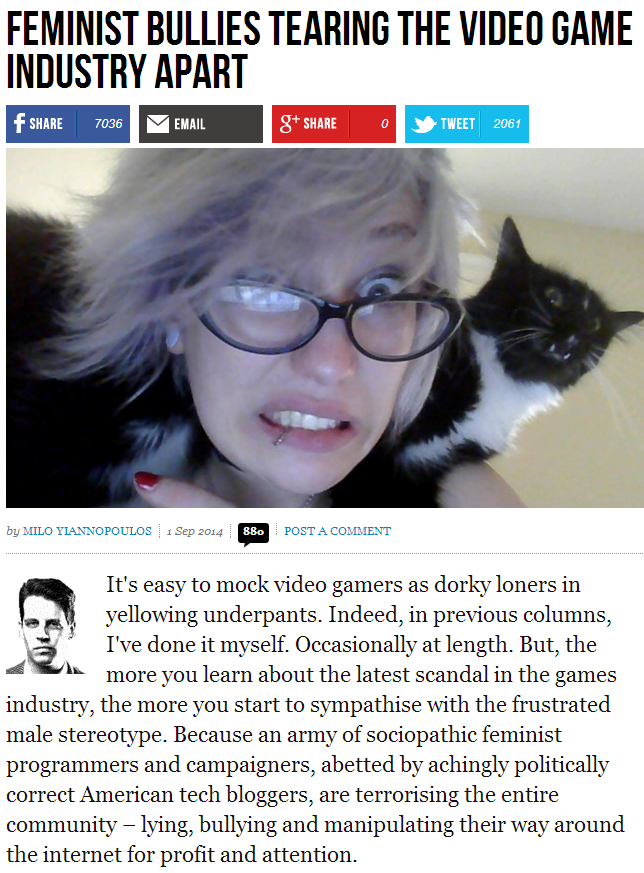 So this is where the state of the industry is:  somehow, demanding that women aren't treated like walking bags of endless sex and delicious candy makes you a "politically correct lying bully".  If the dudebro signal on this has gone up to the point where Team Dead Guy has gotten on board, it's bad.  Extremely bad.

And the people who said "Hey, we should have never let it get this bad to begin with" are being victimized the most.  This is wrong, dead wrong, and what voice I have I'm using to say it's wrong.

Getting the industry to change starts with admitting that.

Welcome To The Gun Show

As part of the sanctions against Russia over the slow, careful invasion of Ukraine, the United States has stopped certain Russian imports.  Apparently those prohibited Russian imports include a particular model of Russian rifle, the "Avtomat Kalashnikova", originally made in 1947 and still in use today, worldwide.

You can imagine exactly what happens next.

Thirty-six hours after the Obama administration banned importation of the classic brand of AK-47 assault rifles as part of sanctions against Russia, a Maryland dealer specializing in the weapon took stock of its inventory.

There was nothing left.

Laboring almost nonstop, workers at Atlantic Firearms in Bishopville, a Worcester County community on the Eastern Shore, had shipped hundreds of Russian-made AK-47s — an assault rifle prized by both consumers and despots — as buyers wiped out gun dealers’ inventories around the country. The frenzy was brought on, in part, by a suspicion among some gun ownersthat the Russia-Ukraine conflict was a backdoor excuse to ban guns many Democrats don’t like. Some customers bought eight to 10 rifles for nearly $1,000 each or more, stockpiling them as investments.


It's almost like they were ready for it.  But what happens when you can no longer legally get the most popular rifle on Earth in the US?

While gun control advocates fret about the secondary market sales, gun stores and dealers are beginning to worry about the long-term implications of these buying frenzies. Seeing sales go up 200 percent in an instant is a nice jolt to the bottom line, but if it’s a sign that the pro-gun community might be losing the longer war, that’s not so good.

“Yes, Obama is the world’s best gun salesman,” said Tyler Whidby, the owner of TW Firearms in Leesburg , Va., which still has some ­Russian-made AK-47s on its shelves. “Every two to four months, somebody says something about gun control, and people turn around to get a gun.”

Another Democrat in the White House, such as Hillary Rodham Clinton, would “financially benefit us in the short term,” Whidby said. But in the long term, “it might put us out of business.”


So how much pressure will the NRA start putting on Congress to lift sanctions against Russia?  We're about to find out.
Posted by Zandar Permalink 10:00:00 AM No comments: