There are two political parties in the US, the Democrats and Trump.  Despite historically dismal overall approval ratings, ratings among the GOP find Trump to be second only to post 9/11 Dubya in approval from his own party at the 500-day mark. 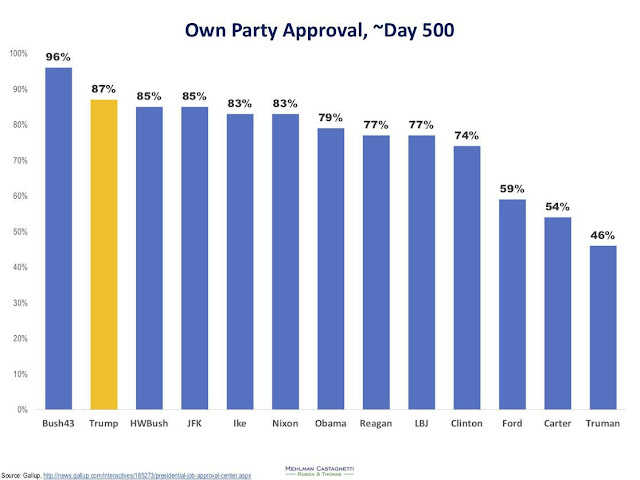 So no, the notion that Republicans will turn on Trump even should Mueller or the Senate present evidence of conspiracy or worse is ludicrous.  They will defend Trump even at the cost of their own livelihoods.  The Republican party is nothing more than the racist, misogynist, bigoted cult of personality that worships Trump, and so are all of his voters.

I'm tired of being nice to them.  It's only made them love Trump more.

It's time to call these assholes out this November and throw them out of power for good.  Get registered, get ready, get friends, get to the polls.  At every turn President Obama's open hand was met by fist after fist.

Now it's time to fight.
Posted by Zandar Permalink 3:00:00 PM No comments:

If you want to know why Putin and his oligarchs have been so successful at money laundering, and why Donald Trump is doing his best at emulating them to create a oligarchy where Trump is most powerful human being on the planet, the key has always been in Moscow's financial relationship with London, as Oliver Bullough of The Guardian explains in this week's Sunday Long Read.


In March, parliament’s foreign affairs committee asked me to come and tell them what to do about dirty Russian cash. As a journalist, I’ve spent much of my career writing about financial corruption in the former Soviet Union, but the invitation came as something of a surprise. After all, ever since I was at school in the 1990s, British politicians have welcomed Russian money to our shores. They have celebrated when oligarchs have bought our football clubs, cheered when they’ve listed their companies on our Stock Exchange. They have gladly accepted their political donations and patronised their charitable foundations.

When journalists and academics pointed out that these murky fortunes could buy influence over our democracy and undermine the rule of law, they were largely dismissed as inconvenient Cassandras warning MPs to beware Russians bearing gifts. But earlier this year, after the poisoning in Salisbury of the former spy Sergei Skripal and his daughter Yulia, those little-heeded prophecies jumped straight into the pages of Hansard. “To those who seek to do us harm, my message is simple: you are not welcome here,” Theresa May told the House of Commons on 14 March, in a speech that blamed Russia for the attack. “There is no place for these people, or their money, in our country.”

Britain’s entire political class joined the prime minister in this screeching handbrake turn. MPs who had long presented the nation’s openness to trade as a great virtue suddenly wanted to be seen as tough on kleptocrats, tough on the causes of kleptocrats. Having allowing so much Russian money into Britain, these MPs were now seized with concern that Vladimir Putin might, through his power over his nation’s super-rich, be able to influence our institutions. Were we selling Putin the rope with which he would hang us, they wondered.

That is why, on 28 March, I took a seat in committee room six, a chamber high up in the Palace of Westminster, with heavy furniture, a view over the River Thames, and a carpet like a migraine. The foreign affairs committee exists to monitor the work of the Foreign Office – essentially, to keep an eye on Boris Johnson – but its members can investigate any subjects they choose. This time, they had chosen to look into the money Putin and his cronies hold in Britain and its overseas territories, with a view to exploring fresh opportunities for sanctions.

I had brought along a list of things I wanted to talk about: how we should improve our defences against money laundering; how we need transparency about who owns property; how MPs themselves must stop taking money from dodgy ex-Soviet oligarchs if they want others to do the same.

But the first question, from Priti Patel, the former international development secretary, threw me: “Can you give the committee a sense of the scale of so-called ‘dirty money’ being laundered through London?” she asked.

It is a vast question, worthy of a book in itself, and one that even the National Crime Agency would struggle to answer, let alone me. Then came her second question: “What assets has that hidden money gone into?”

I tried my best – I mentioned property, private schools, luxury goods – but I think she and I both knew I’d fluffed it. I should have brought along specific examples, with times and dates and names. The embarrassing truth is that, although I have written about Russia and its neighbours for two decades, during which I have increasingly specialised in analysing corruption, it had never really occurred to me to ascertain precisely how much stolen Russian money had found a home in the UK, or to chart exactly where it had ended up.

If someone like me had been this culpably incurious, it is hardly surprising that politicians with dozens of other priorities have had to scramble to understand what we’re facing. But for the past couple of months, I have belatedly tried to discover an answer to the foreign affairs committee’s questions.

It turns out that the situation is even more worrying than I had suspected.


It is far too late for the UK, facing Brexit and financial catastrophe of their own making, being sliced off like a cut of prime beef and served to Putin and Moscow.  The rest of the EU is barely holding on, and all indications are that Italy and Spain will be the next to fall.  Putin has all but won, and his absolute dominance of Europe through a new Warsaw Pact is now only a matter of time.

But Putin has already gotten his hooks into the US with Trump, a willing agent who has worked out for the Kremlin apparatchiks beyond their wildest dreams.  Putin is carving up London Broil right now, but he has our country on the menu, and the knives are already out. Trump still thinks he can be Putin, and he'll destroy our democracy to get there.

And that's when Putin will take the reins.