Last Call For We Sold Our Country Cheaply


With reports of Jeb Bush telling donors not to give more than $1 million to his presidential campaign in waiting and Hillary Clinton aiming at a floor of $1 billion raised for her 2016 bid, the hand-wringing over the influence of money in politics has begun (again).

And, yes, lots and lots of money gets spent on elections -- money that, arguably, might be better spent elsewhere. But, it's also important to add a bit of context to the big numbers that get thrown around in terms of campaign spending. Republican pollsters Gene Ulm and Brian O'Bannon do just that in a blog post where they note that the estimated $7 billion spent on the entire two-year 2012 election pales in comparison to the amount of money gambled on the NCAA Tournament bracket from just Monday through Thursday of this past week. The duo write: "Significantly more money will be spent on tolerated, but illegal bracket gambling than spent on a legal, but not tolerated presidential election. Begging the question: Is there McCain-Feingold bracket reform in the future?"


What that means of course is that if you want to buy a national election, you only need a couple billion dollars.  That's pretty cheap compared to the trillions that compose our GDP.  You can effectively buy a country's politics for less than one-tenth of one percent of what America produces in a year.

We sell ourselves cheaply, do we not?
Posted by Zandar Permalink 9:13:00 PM 3 comments:

Slate's Eric Holthaus reminds us that America has passed a very real climate threshold this winter and that we need to stop talking about how climate change is off in the future, or discussing if it's a nebulous concept that may or may not exist.

On Wednesday, the National Oceanic and Atmospheric Administration announced that Earth’s global temperature for February was among the hottest ever measured. So far, 2015 is tracking above record-warm 2014—which, when combined with the newly resurgent El Niño, means we’re on pace for another hottest year in history.

In addition to the just-completed warmest winter on record globally (despite the brutal cold and record snow in the eastern U.S.), new data on Thursday from the National Snow and Ice Data Center show that this year’s peak Arctic sea ice reached its lowest ever maximum extent, thanks to “an unusual configuration of the jet stream” that greatly warmed the Pacific Ocean near Alaska.

But here’s the most upsetting news. It’s been exactly 30 years since the last time the world was briefly cooler than its 20th-century average. Every single month since February 1985 has been hotter than the long-term average—that’s 360 consecutive months.

More than just being a round number, the 30-year streak has deeper significance. In climatology, a continuous 30-year stretch of data is traditionally what’s used to define what’s “normal” for a given location. In a very real way, we can now say that for our given location—the planet Earth—global warming is now “normal.” Forget debating—our climate has officially changed.


So yes, the debate on climate change is now over. What happens now is how we choose to deal with it: do nothing if not make the situation even worse, or try to limit the damage.

Imagine another 30 years, 360 consecutive months, all warmer than the average of the planet over the last 100 years.  And then another.  California's drought is the new normal.  New England record snows are the new normal.  Florida hurricanes and Kansas F5 tornadoes and Arizona wildfires and Louisiana flooding?  All the new normal.

If you're 30 or younger, climate change has been the norm for your entire life. Storms of the Century ever couple of years has been what you have always known, from Hugo to Andrew to Katrina to Sandy. And the next 30 years?  Most likely much worse.

We're only just beginning to feel the effects.
Posted by Zandar Permalink 4:00:00 PM No comments:

America, In One Chart

The reason why we can't have a conversation on race is the fact that one side simply doesn't want to have that conversation, period. 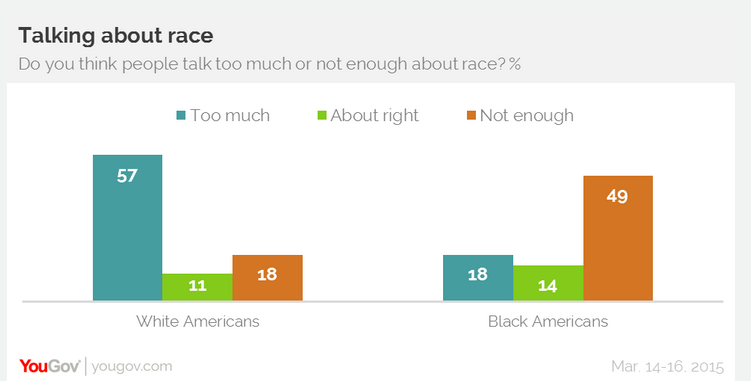 Any questions?
Posted by Zandar Permalink 10:00:00 AM No comments: