The screaming headline from the Daily Mail, declaring (again) that Global Warming is over and government scientists are all liars:

And now it's global COOLING! Record return of Arctic ice cap as it grows by 60% in a year 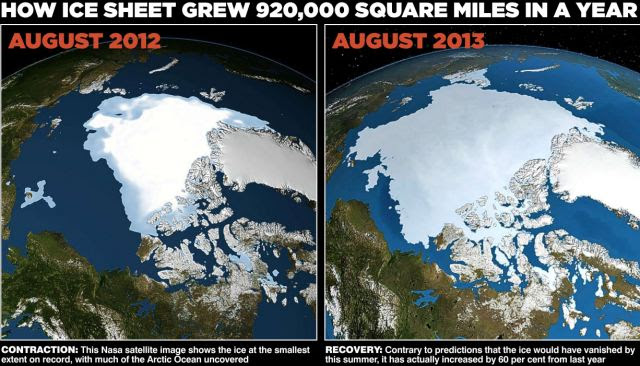 I am intellectually incapable of coming up with a plausible scenario in which one good thinking American approves of Barack Obama's job performance, much less 47% of us. I will therefore make a grand conjecture about if these evil, worhtless wayward souls are merely pitiful wretches on federal welfare, if they are simple morons, if they are brainwashed by the evil liberal media, if they are anti-white racists, or what is most likely, a combination of the above factors.

I think that all of the above explanations account for some of the 47%. When the federal government spends $3.8 trillion a year, it can buy a lot of votes. Remember that every one of those 3.8 trillion dollars represents a check that someone cashed. Beyond that, I have written many times about the over-the-top emails with which the Democratic Party bombards its members, painting Republicans as, more or less, the Devil. Repetition is persuasive, and many millions of Democrats will probably say they approve of any Democratic president, regardless of how he performs. (The same, for better or worse, is not true of Republican voters.) And there is no doubt that a huge number of voters are astonishingly ignorant about the issues. This is demonstrated by every man in the street interview on YouTube.


Ahh, if all of us would only watch FOX News and would learn the truth, Obama would have an approval rating of 0%.   On the other hand, the category of those people has now been expanded to include "anyone who thinks President Obama is doing a good job."

The GOP will have to make sure they get punished.
Posted by Zandar Permalink 3:30:00 PM 2 comments:

We're still allowed to ask why some Republicans are really opposing a strike on Syria still, yes?  Steve M. flags down this account of a McCain town hall:

"You and the rest of Congress, including the president of the United States have went against the will your people in Syria regardless of your position and vote, whether it is a yes or no is still a political smokescreen," the town hall attendee said to an irritated McCain. "I believe wholeheartedly you do not care about the will and well-being of America or its people. You lied the American people about the chemical attacks in Syria. The American people know that it was our government that is most likely responsible. There is strong evidence, including video, that these attacks were carried out by al Qaeda and you advocate starting a war, even maybe World War, by taking the same attack and blaming it on Assad."


Indeed, there are quite a few folks on the right who suddenly think this is a false flag operation, Steve reminds us:


Good company, along with World Net Daily and Ron Paul...and I might add Alan Grayson on the left, too.

This is a bit of a sensitive subject, but the administration has been honest that they have no smoking gun that the attack was ordered by Assad. The evidence of his involvement is circumstantial. We’re two years into a civil war that he’s winning. The Russians and Iranians have told him not to use chemical weapons. Hezbollah has told him not to use chemical weapons because their fighters are at risk. So he’s winning, there’s scant and circumstantial evidence that he ordered the attack. Why are we gaming out his incentives when we don’t know he ordered it?


With all the valid reasons to oppose Syria (and I am still not convinced we should attack Damascus) "Driven by Obama Derangement Syndrome" is the one most likely to make me reconsider backing the President.  Any group on the same side as Alex Jones and WND?  No.  And that brings us to these clowns:

The 'International Human Shields' movement, started by a group of activists in Britain and the US, plans to bring to Syria civilians from countries around the globe, who will try to deter US strikes on the country by staking out potential military targets.