Last Call For That Little Domestic Terrorism Problem Of Ours, Con't

I've talked before about Washington state Republican Matt Shea, an openly violent white supremacist serving in the state legislature, and his links to domestic terrorism.


Washington state Rep. Matt Shea acknowledged Wednesday he had distributed a four-page manifesto titled “Biblical Basis for War,” which describes the Christian God as a “warrior,” details the composition and strategies of a “Holy Army” and condemns abortion and same-sex marriage.

The document is organized in 14 sections with multiple tiers of bullet points and a smattering of biblical citations. Under one heading, “Rules of War,” it makes a chilling prescription for enemies who flout “biblical law.” It states, “If they do not yield – kill all males.”


That was least year.  Since then, Shea has been under investigation by the state for his white supremacist terrorism ties.  The investigation has finished this month and the conclusion is that Shea is far worse than anyone knew, because he's been an active part of domestic terrorist attacks.

An independent investigation has concluded that Washington state Rep. Matt Shea “participated in an act of domestic terrorism against the United States” by helping plan the armed takeover of the Malheur Wildlife Refuge in Oregon three years ago.

The investigation found that Shea similarly played a key role in two other armed conflicts against the U.S. government — not only by showing up and participating in the standoffs, but by helping plan them, which involved recruiting armed militia members to oppose federal law enforcement agents.

The 108-page report, released internally Thursday to members of the state House, includes several other serious findings against Shea.

Among them: that the Spokane Valley lawmaker took part in a group chat in 2017 where he “condoned violence and intimidation” of his political opponents, and offered to conduct background checks on them.

That allegation, first reported by The Guardian in April, was largely what spurred House leaders to commission the outside investigation into Shea’s conduct.

But the incident wasn’t an isolated one, according to the four-month investigation, which was led by a former FBI agent and former law enforcement officer.

The investigation says Shea, a leader of the anti-government Patriot movement, routinely encouraged his supporters to intimidate “activists, government officials, Muslims, and others who speak or act in opposition to his personal beliefs and political agenda.” Those activities occurred over a five-year period from 2014 to 2019, the report says.

The four-month investigation similarly confirmed other media reports about Shea, including that he “engaged in and supported the training of youth and young adults to fight a holy war” (also reported by The Guardian), and that he wrote a document called “Biblical Basis for War" (first reported by The Spokesman-Review).


So he actively helped the Malheur standoff and helped Cliven Bundy, but Shea also participated in a third terrorism incident.

But the investigation says Shea also took part in a third armed standoff against federal officials, this one in Priest River, Idaho, in 2015.

That confrontation involved blocking federal officials from seizing firearms from an elderly veteran who was no longer legally eligible to possess guns, according to the investigators’ report.

After the veteran suffered a stroke, a health care professional added the man to a federal database of people ineligible to purchase firearms. The U.S. Department of Veterans Affairs had planned to remove the veteran’s guns, the report says, “pursuant to VA regulations for individuals receiving VA benefits.”

Shea called on members of the Patriot movement to assemble at the man’s house to stop the firearms seizure.

It worked, the investigators wrote: “Reports indicated that approximately 100 individuals showed up, many armed, and stood with Representative Shea at the veteran’s home to prevent the VA employee from entering.”

No one was hurt in the incident. But the investigators found evidence that Shea was heavily involved in planning the standoff, and was prepared for a prolonged encounter that could lead to violence.


May I remind you that Matt Shea is a sitting lawmaker in the Washington State legislature, an open white supremacist and militia nutjob who has taken up arms against the government.

These are who Republicans are, guys.

Never forget that.
Posted by Zandar Permalink 9:59:00 PM No comments:

Yet another GOP Congressman retiring, and this time it's impeachment troll and clown shoe Mark Meadows of NC.


Republican Rep. Mark Meadows, one of President Donald Trump's most visible allies on Capitol Hill, is not seeking reelection in 2020, he announced in a statement Thursday.

"After prayerful consideration and discussion with family, today I'm announcing that my time serving Western North Carolina in Congress will come to a close at the end of this term," Meadows said in a statement.

The North Carolina Republican was first elected to Congress in 2012 and has since played a major role in shaping the House GOP over the last few years, including as the former chair of the conservative House Freedom Caucus. A source familiar told CNN that the timing of Meadows' announcement was driven by the North Carolina candidate filing deadline, which is Friday.


Ahh, but this rat isn't fleeing the sinking Trump ship, he's getting a promotion to Chief of Rats.

In his statement, Meadows said his work "with President Trump and his administration is only beginning."

Meadows is open to a role in the Trump administration, but nothing has been finalized, the source told CNN, adding that he had been thinking about not seeking reelection for awhile.

Last year, Meadows was considered for the role of White House chief of staff, but the "President told him we need him in Congress so he can continue the great work he is doing there," then-White House press secretary Sarah Sanders said in a statement.

Lately, conversations about his role in Trump world have turned to something closer to the President's campaign, sources told CNN.

While the top job in the West Wing hasn't been ruled out, Meadows has expressed an interest privately in playing a role in the President's reelection effort, two people say. Ultimately the decision will be up to Trump and his son-in-law and senior adviser, Jared Kushner.


So either Meadows is going to be Trump's new Chief of Staff and Mick Mulvaney is out, or he's going to Brad Parscale's 2020 campaign shop.  Either way, Meadows sees no benefit in sticking around for what could be a tough fight for him in NC's newly redrawn congressional districts.

We'll see where Meadows goes, but NC-11, which is now the far west of the state including Asheville, is now very competitive for Dems without an incumbent.
Posted by Zandar Permalink 4:00:00 PM No comments:

Email ThisBlogThis!Share to TwitterShare to FacebookShare to Pinterest
StupidiTags(tm): 2020 Elections, GOP Stupidity, Mick Mulvaney, Trump Regime, Vote Like Your Country Depends On It

They Blinded Science With Me, Con't

The Trump Regime continues to attack national science institutions relentlessly, now handing the Centers for Disease Control a list of forbidden words that can no longer be used in official documents, reports, or next year's budget.


The Trump administration is prohibiting officials at the nation's top public health agency from using a list of seven words or phrases — including "fetus" and "transgender" — in official documents being prepared for next year's budget.

Policy analysts at the Centers for Disease Control and Prevention in Atlanta were told of the list of forbidden words at a meeting Thursday with senior CDC officials who oversee the budget, according to an analyst who took part in the 90-minute briefing. The forbidden words are "vulnerable," "entitlement," "diversity," "transgender," "fetus," "evidence-based" and "science-based."

In some instances, the analysts were given alternative phrases. Instead of "science-based" or ­"evidence-based," the suggested phrase is "CDC bases its recommendations on science in consideration with community standards and wishes," the person said. In other cases, no replacement words were immediately offered.

The Department of Health and Human Services, which oversees the CDC, "will continue to use the best scientific evidence available to improve the health of all Americans," HHS spokesman Matt Lloyd told The Washington Post. "HHS also strongly encourages the use of outcome and evidence data in program evaluations and budget decisions."

The question of how to address such issues as sexual orientation, gender identity and abortion rights — all of which received significant visibility under the Obama administration — has surfaced repeatedly in federal agencies since President Trump took office. Several key departments — including HHS, as well as Justice, Education, and Housing and Urban Development — have changed some federal policies and how they collect government information about lesbian, gay, bisexual and transgender Americans.
In March, for example, HHS dropped questions about sexual orientation and gender identity in two surveys of elderly people.

HHS has also removed information about LGBT Americans from its website. The department's Administration for Children and Families, for example, archived a page that outlined federal services that are available for LGBT people and their families, including how they can adopt and receive help if they are the victims of sex trafficking.

At the CDC, the meeting about the banned words was led by Alison Kelly, a career civil servant who is a senior leader in the agency's Office of Financial Resources, according to the CDC analyst, who spoke on the condition of anonymity because the person was not authorized to speak publicly. Kelly did not say why the words are being banned, according to the analyst, and told the group that she was merely relaying the information.

Other CDC officials confirmed the existence of a list of forbidden words. It's likely that other parts of HHS are operating under the same guidelines regarding the use of these words, the analyst said.

At the CDC, several offices have responsibility for work that uses some of these words. The National Center for HIV/AIDS, Viral Hepatitis, STD, and TB Prevention is working on ways to prevent HIV among transgender people and reduce health disparities. The CDC's work on birth defects caused by the Zika virus includes research on the developing fetus.

Sure would love to see the First Amendment folks acknowledge that a government that openly bans the use of words in its own operations is in violation of the Constitution and oh yeah, openly fascist and autocratic.

This is only the beginning should Trump get that second term.
Posted by Zandar Permalink 10:00:00 AM No comments: 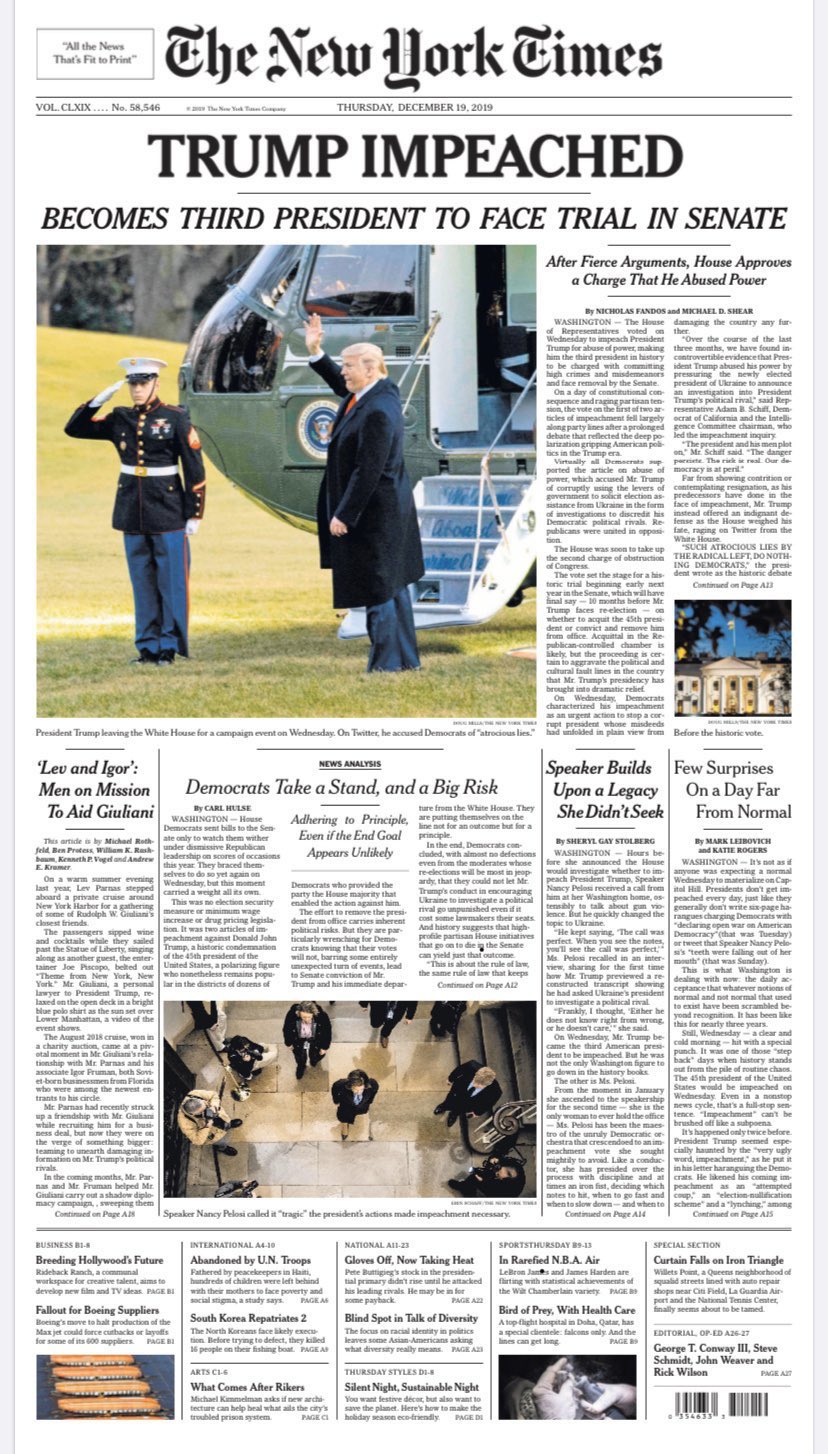 And that's the news.
Posted by Zandar Permalink 7:00:00 AM No comments: