Last Call For Flipping The Script On SCOTUS, Con't

I personally believe that President Obama is awaiting the March 15th primaries that will all but end the Sanders campaign, so that he can then release information on his nominee for the Supreme Court to fill Justice Scalia's seat and use that as the rallying cry for Dems to pivot to the general.

Republicans, in what is increasingly looking like a Trump vs Cruz deathmatch on the set of Mad Max Fury Road, are themselves laying the groundwork for never replacing Scalia.  At least, not by a Democrat.

Dean Reuter, vice president of the Federalist Society, hinted that there might even be too many justices, reported Right Wing Watch.

“There’s no time limit in the Constitution, and there’s nothing magical about there being nine justices,” Reuter said during a panel meeting at the Conservative Political Action Conference (CPAC).

“The country started out with six justices, we’ve had as many as ten at some point in time,” he continued. “As recently as 2010, when Justice Elena Kagan came on the Court, she had been solicitor general so she recused herself in over a third of the cases (so) I don’t see a sense of urgency.”

Reuter led a brief workshop last week at CPAC with John Yoo, the author of the infamous “torture memos” as a member of the Bush administration, on topics covered in their new book, “Liberty’s Nemesis: The Unchecked Expansion of the State.”

“The president surely does have a duty to nominate someone, but the Senate has a co-equal duty as a co-equal branch of government, to in this case operate as a check,” Reuter argued. “It doesn’t have any responsibility or any duty to host one-on-one meetings with the nominee, or hold a hearing, or hold a committee vote, or a floor vote. There’s no timetable. It’s not as if the president sends somebody over and says, we need this back next month, or next Wednesday, or whatever.”

Reuter, whose group shepherded Samuel Alito’s nomination through the Senate, suggested that Supreme Court appointments were an example of executive overreach.

“The Senate is perfectly well within its prerogative, even the proper understanding of checks and balances, it can easily be said that the role of the Senate is to check the president’s power in this instance, the appointment power, especially I think when you’re dealing with a third branch of government and a lifetime appointment,” he argued.


I've said for months that this would end up being the GOP's view.  Right now, the argument is "let the people decide" but they're losing the battle for public opinion on that.  Putting a face on the nomination would give Republicans a target and a fight, but that could easily backfire too.

Do I think the GOP will be able to get away with it?  Until and unless voters turn the Senate back over to the Democrats, yes.  That could very well happen if they nominate Cruz or Trump, in which case that sets up a battle over the filibuster in 2017.

But that's down the road, A lot could change and the GOP could very well fold.  But I don't think it's likely.  The notion that the GOP simply shouldn't allow a replacement at all will be with us for some time.
Posted by Zandar Permalink 10:09:00 PM No comments:

Canada Has Idiots, Too

I have absolutely zero tolerance for people who make decisions like this, amounting to child endangerment and criminal negligence.

Two Mormon parents who own a nutritional supplement company are accused of letting their toddler son die from meningitis because they tried to treat him with home remedies instead of medicine.

David and Collet Stephan have pleaded not guilty to charges that they failed to provide the necessities of life to their 19-month-old son Ezekiel, reported CBC News.

Prosecutors in Alberta, Canada, say the couple did not call an ambulance until the boy stopped breathing and instead fed him supplements with an eye dropper and lay down with him.

Collet Stephan, 35, told police that a friend told the couple their son had meningitis — inflammation caused by an infection of the fluid surrounding the brain and spinal cord.

She said they tried to boost the boy’s immune system by feeding him with olive leaf extract, whey protein, water with maple syrup and juice with frozen berries.

They finally fed the boy, who was becoming stiff and lethargic after two weeks of illness, a mixture of apple cider vinegar, horseradish root, hot peppers, onion, garlic and ginger root.

The child was airlifted to a hospital after he stopped breathing, and doctors removed him from life support after five days.

Prosecutors played recordings during the couple’s trial of Collet Stephan describing their attempt to treat the boy.


Not sure what Canadian laws are on this, but having grown up as the son of two health care professionals, this makes me absolutely seethe.  I just don't understand why you would massively increase the risk of a child's life like that when the means to treat disease are available.

The Bloomberg Is Off The Rose

As I mentioned this morning, former NYC Mayor Michael Bloomberg is officially not going to get into the race for the White House as a third party spoiler, and the NY Times received some of Bloomberg's research on the run.  It's interesting stuff indeed.

Bloomberg's advisers thought he had a real shot as the third party alternative in a Trump v Sanders matchup: 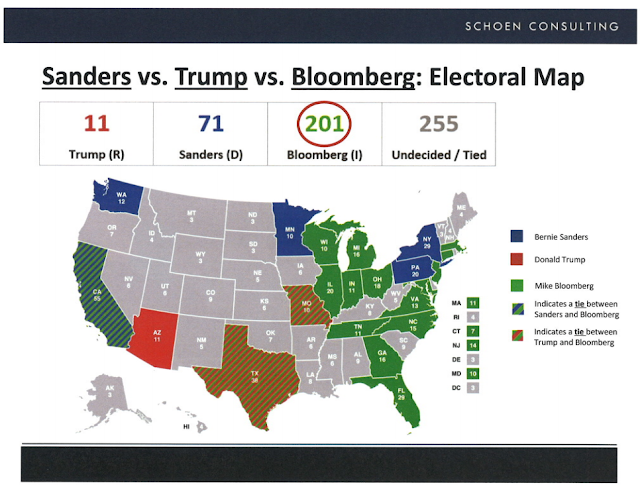 Amazing.  Bloomberg's team thought he would win the Upper Midwest with the exception of Minnesota, while utterly breaking Trump in the South, with Bloomberg somehow being competitive in both Texas and California and being in position to get to 270 win easily.

But the reality of a Clinton/Trump matchup apparently forced him to fold his cards completely. 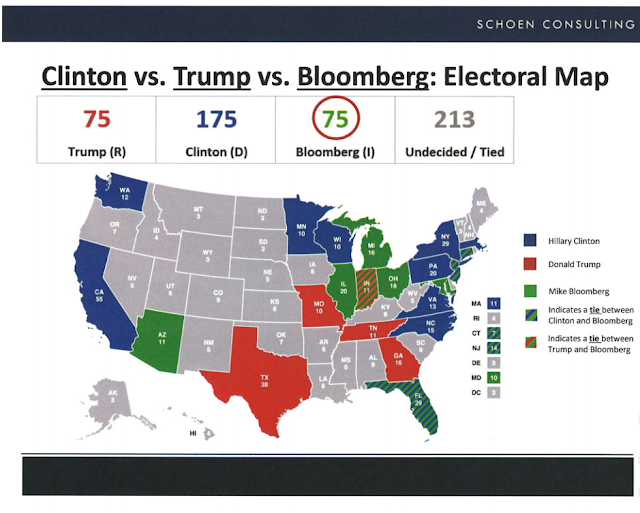 The scenario here is that Bloomberg weakens both sides to the point where nobody gets to 270, and then the GOP-controlled House would decide the election for Trump.

Note the maps come from our old friend Doug Schoen, which means they are vastly overstating Bloomberg's chance of winning any state whatsoever.  The actual reality is that much like Perot's run two decades ago, Bloomberg wouldn't win a single state, but would split a vast number of states that would make for a different swing state group.  That chaos would almost certainly benefit Trump as well, allowing him to win states that he wouldn't have a shot at.

The upshot would be the same: Bloomberg would create a path for President Trump.  Luckily that's not something that he wants to be remembered for, so for now, we're being spared his ego.
Posted by Zandar Permalink 10:00:00 AM No comments: