Good thing racism is over here in Kentucky.

A Halloween display depicting what appears to be a black family hanging from a tree outside of a Kentucky residence has been taken down after people complained about it. The house is located on the military base in Fort Campbell.

Clarksville.com reports that one of its readers sent in a photo of four figures hanging in the home's front yard. The child has a knife in its back and one of the figures is holding a sign that is hard to read in the photo.

Brendalyn Carpenter with Fort Campbell Public Affairs said her department received a report of a Halloween display that was “offensive in nature” and asked that it be investigated. The woman who had put up the display agreed to take it down after learning of the concerns voiced by some in her community.

“Displays of an offensive nature are not reflective of Army values and the family-friendly environment provided for employees and residents of the Fort Campbell community,” Carpenter said.

The woman, who hasn’t been identified, said she didn’t mean to offend anyone and apologized. It's unclear how long the display was hanging before it was removed, but it is odd that someone could think such a display wouldn’t be perceived as being offensive.

Nope.  Couldn't see why hanging a black family from a tree would offend anyone, you know.  She's probably sorry that you were offended by it, gosh, what's the big deal?

Email ThisBlogThis!Share to TwitterShare to FacebookShare to Pinterest
StupidiTags(tm): EPIC FAIL, I CANNOT WITH THESE GUYS, Racist Stupidity

Throttle It Back, Guys

Looks like the Federal Trade Commission thinks that when AT&T offers "unlimited" data plans on mobile devices, that it can't just allow 3 GB of data in a month and then throttle download speeds to the point of not being useful.  It's suing the mobile carrier over the plans, and millions of AT&T customers -- including myself -- want what we paid for.

The U.S. government filed a lawsuit against AT&T Inc on Tuesday, alleging the No. 2 U.S. wireless carrier sold consumers unlimited data plans but would slow their Internet down once they used a certain amount of data.

The Federal Trade Commission, which filed the lawsuit, said that this "throttling" of Internet feeds was deceptive and said that in some cases the data speeds were slowed by nearly 90 percent.

AT&T did not immediately respond to a request for comment.

More than 3.5 million customers had their Internet speeds slowed more than 25 million times because of AT&T's practice, which began in October 2011, the FTC said.

AT&T says on its support website that people who have legacy unlimited data plans can experience data slowdowns once they exceed certain limits. Customers with a 3G smartphone will experience slowdowns after using 3 gigabytes of data in a month while those with 4G LTE smartphones can use 5 gigabytes before hitting potential slowdowns.

Those who dislike the slower internet once they hit their limit are told that they can use Wi-Fi or switch to a different AT&T plan, AT&T says on its web site.


AT&T can't just stop providing data plans to iPhone users like myself who bought and kept the original unlimited data plans from when AT&T was first offering the devices six years ago, especially since it made everyone buy a separate data plan -- with a separate additional charge -- to even activate an iPhone in the first place.  That's always been true.

So when customers like myself kept the plans and AT&T grandfathered them, they realized they made a huge mistake and then needed to make the plans all but unusable.  If you're wondering why AT&T is trying to screw its unlimited data plan users into canceling their contract or changing their plan, this might have something to do with it: 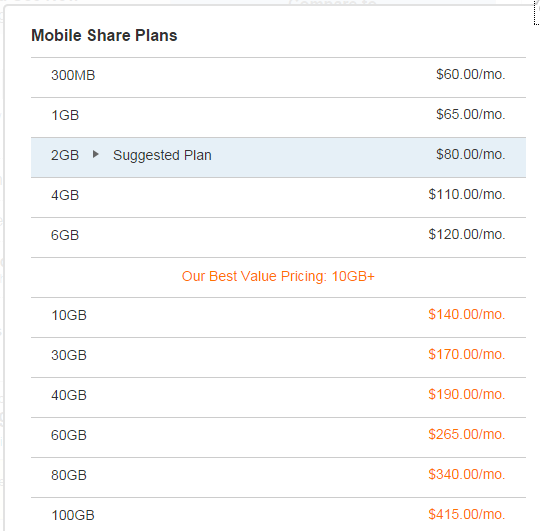 And these are "value pricing" data plans.  Do you see now why AT&T has to get rid of me, and is doing everything they can to get rid of millions of customers like me?  We're immune to their massive scheme where even a handful of gigabytes a month in data is hundreds of dollars.

Of course the real problem is the fact that America has the most overpriced internet on Earth. European, Asian, and even African internet rates are a fraction or what we pay, and we're getting screwed massively by companies like AT&T.

Who I'm sticking with, if only to enjoy getting my money's worth at a little more than the 2 GB going rate.
Posted by Zandar Permalink 4:00:00 PM 2 comments:

Both Sides Do It, Millennial Edition

Election Day is Tuesday, and the bottom line is Millennial voters don't give a good god damn and think both sides are responsible for the terrible state of politics in America.

A new poll released Wednesday by Harvard's Institute of Politics suggests Democrats are failing miserably on that front when it comes to Millennials, the generation that helped Barack Obama make history in 2008. The survey of just over 2,000 18-29-year-olds broadly indicated a shift away from Democrats in 2014, leading the pollsters to declare Millennials "up for grabs" in the midterms.

But the most stunning finding came from the question of which party young voters wanted to see control Congress next year. Among all respondents, 50 percent chose the Democrats and 43 percent picked Republicans. But among the much smaller subset of respondents who said they would "definitely" vote this fall, the GOP won, 51 percent to 47 percent.

That Millennials have become disenchanted with the current state of affairs in Washington seems obvious. Asked who they blame for the "political gridlock" in the capital, a clear majority–56 percent– replied, "All of them." Nearly the same percentage said they would recall or replace the entire Congress if they could.

Millennials, particularly younger Millennials, want real change, but they don't believe either party can provide it, so they don't vote.  The result is that the GOP-heavy Boomers will continue to control politics in this country for another decade or so.

The relentless whining that "Obama has failed us, he's worse than Bush!" coming from the Professional Left has definitely had its desired effect.

If you don't vote, nothing will ever change.  I just don't comprehend when given the people who died for the right to vote, why tens of millions of Americans throw that right away because "both parties are the same".

If Millennials turned out like they did in 2008 or 2012 for 2014, Republicans would be pissing themselves in fear.  But hey, Obama is worse than Bush, so who cares, right?

Email ThisBlogThis!Share to TwitterShare to FacebookShare to Pinterest
StupidiTags(tm): 2014 Election, Social Stupidity, Vote Like Your Country Depends On It, Voting Stupidity