Last Call For A Climate Of Death

The Trump regime is beginning the process of officially wiping out Obama-era pollution regulations, and new EPA head Andrew Wheeler is picking up right where Scott Pruitt left off by freely admitting the new power plant rules will lead to 1,400 additional premature deaths yearly.

The Trump administration on Tuesday made public the details of its new pollution rules governing coal-burning power plants, and the fine print includes an acknowledgment that the plan would increase carbon emissions and lead to up to 1,400 premature deaths annually.

The proposal, the Affordable Clean Energy rule, is a replacement for the Obama-era Clean Power Plan, which was an aggressive effort to speed up the closures of coal-burning plants, one of the main producers of greenhouse gases, by setting national targets for cutting carbon dioxide emissions and encouraging utilities to use cleaner energy sources like wind and solar.

Trump administration officials say the Clean Power Plan, in its effort to reduce carbon emissions, illegally tried to force electric utilities to use greener energy sources. The new plan, they said, would achieve many of the benefits sought by the Obama administration but in a way that is legal and allows states greater flexibility.

“Today’s proposal provides the states and regulated community the certainty they need to continue environmental progress while fulfilling President Trump’s goal of energy dominance,” Andrew Wheeler, the acting administrator of the E.P.A., said in a statement Tuesday.


Energy dominance at the cost of lives, and the EPA is 100% aware that the plan will make things worse for America.

However, the hundreds of pages of technical analysis that accompany the new proposal indicate that emissions would grow under the plan.

Compared to the Obama-era plan, the analysis says, “implementing the proposed rule is expected to increase emissions of carbon dioxide and the level of emissions of certain pollutants in the atmosphere that adversely affect human health.”

The analysis also includes a section called “foregone” climate and human health benefits. That is, instead of listing the health gains of the Trump plan — preventing premature deaths, for example, or avoiding a certain number of increased emergency room visits from asthma attacks — it is instead describing the effect of the Trump plan as benefits lost.
The proposal lays out several possible pathways that individual states might use for regulating coal-fired power plants, and what the consequences would be for pollution and human health in each case. In the scenario the E.P.A. has pegged as the most likely to occur, the health effects would be significant.

In that scenario, the Trump E.P.A. predicts its plan will see between 470 and 1,400 premature deaths annually by 2030 because of increased rates of microscopic airborne particulates known as PM 2.5, which are dangerous because of their link to heart and lung disease as well as their ability to trigger chronic problems like asthma and bronchitis.


This is why the Trump regime wants government scientists to be answerable to politicians and not science itself.  As I said last year, the damage the Trump EPA will do to the environment is incalculable.

If Americans die, well, it's the weak ones who are sick and whose health expenses are costing taxpayers money anyway, right?
Posted by Zandar Permalink 9:56:00 PM No comments:

Dave Wasserman of Cook Political Report talks to the NY Times about the massive difference between the Democratic party's prospects this year in the House, and the dismal defense they have to play in the Senate.


This fall, Democrats are defending 26 Senate seats, with Bernie Sanders and Angus King (more than half of their caucus), including five seats that voted for President Trump by 19 points or more. Republicans are defending only nine seats (fewer than a fifth of their caucus); all but one are states Mr. Trump carried.

But in the House, where all 435 seats are up for election, Republicans are much more exposed: They must defend 25 districts Hillary Clinton carried, whereas Democrats must defend only 13 seats Mr. Trump won.

In my time covering races professionally, I’ve never observed this little overlap between the battlegrounds of high-stakes Senate and House races. Of the 64 most competitive House races, only 15 are in states with highly competitive Senate races.

Even if Democrats have a stellar year nationally, Democratic Senators Joe Manchin of West Virginia, Heidi Heitkamp of North Dakota, Claire McCaskill of Missouri and Joe Donnelly of Indiana could still fall short of re-election in states where the president is still popular.

But the Republicans’ tenuous grip on the House is exposing the limits of gerrymandering. Several seats Republican mapmakers drew to be “safe” at the beginning of the decade, including districts outside Atlanta, Detroit, Dallas, Houston, Kansas City and Washington, are suddenly under stress from the combination of college-educated whites fleeing the new, Trump-led G.O.P. and the potential for a Democratic wave.

Much as 2016 produced an anomalous split between the popular vote and the Electoral College, 2018 could produce a split decision between the House and Senate. That would allow both parties to claim a midterm mandate — and reinforce their stubbornness.


The good news: if the Dems can hold on this year, it's the GOP who has to play defense in 2020.  With Trump on the ticket, the Dems could take the Senate and White House in two years, and the country would go through a stunning turn-around.  After yesterday, this calculus could definitely change in the Democrats' favor.

The Republican plan is a full court press to ignore the Cohen and Manafort stories though and attack the Democrats as corrupt.

It’s Tuesday afternoon. Imagine, for a moment, that President Trump logs on to Twitter. News is breaking that could prove existential for his presidency. But his social media feed hardly records the magnitude of the developments.

Instead, a link from Sean Hannity of Fox News appears, announcing the intention of Michael Cohen, Trump’s former lawyer, to enter a guilty plea but omitting the fact that Cohen’s admission implicates the president. A minute later, another link from Hannity comes through, this one about a former congressional IT staffer targeted by conspiracy theories cooked up by right-wing media and advanced by the president.

Trump’s carefully curated feed is a reflection of the ideological chasm that’s dividing the media and splintering society. Tuesday offered vivid evidence of the way in which right-wing media insulates Trump, and his most devoted supporters, from blunt assessments of his administration.


What did you expect from the world of alternative facts?

Also on offer to the president was an announcement from his own White House about business confidence and a supportive message from Donald Trump Jr. If he went online shortly before 4 p.m., the only “BREAKING NEWS” alert he would have seen was the one from Fox about the 24-year-old undocumented immigrant from Mexico who law enforcement officials say killed Mollie Tibbetts, the 20-year-old college student who disappeared last month in Iowa. The story led Fox’s homepage much of the day.

Alarm over the student’s death dominated the president’s feed, which has been replicated by the account @trumps_feed, created by The Washington Post’s Philip Bump. “OUTRAGE!” steamed Laura Ingraham. The only message the Fox News host posted about Tuesday’s legal outcomes was an opinion column criticizing CNN for seeking the names of the jurors in the Manafort trial.


The Mollie Tibbets story is definitely the rage on the right this morning.  It's a tragic murder, and she of course didn't deserve to be brutally murdered by anyone, but it has all the ingredients they need for OUTRAGE™ and her death is being exploited as such to help Donald Trump.

Authorities in Iowa have filed charges against an undocumented immigrant on Tuesday in connection to a recovered body believed to be that of 20-year-old University of Iowa student Mollie Tibbetts, who disappeared from her home a month ago.

The details: The suspect, identified as Cristhian Bahena Rivera, 24, is facing a first degree murder charge and life without parole, Rick Rahn, special agent at the Iowa Division of Criminal Investigation, explained in a briefing Tuesday. He's believed to have been living in Poweshiek County area for four to seven years.


A pretty young white co-ed apparently killed by an undocumented immigrant who had been in the US for several years?  Newt Gingrich wants to make her a household name.

Only one problem with that.


This is how Republicans are going to protect Trump? It won't work if we vote.
Posted by Zandar Permalink 4:00:00 PM No comments:

The Tuesday That Will Live In Infamy

The front page of today's NY Times says it all: 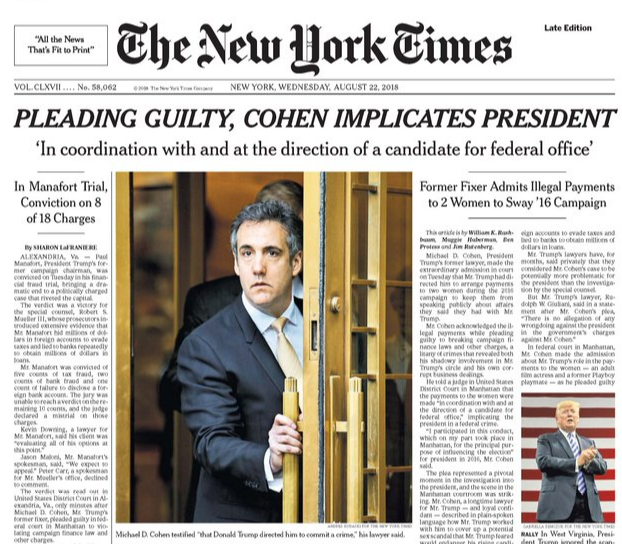 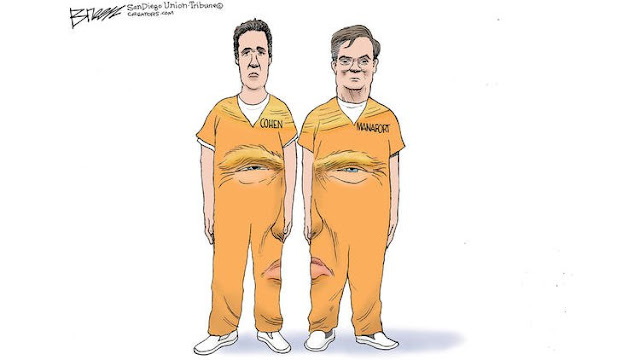 It was one for the history books, guys.  Let's see what today brings.
Posted by Zandar Permalink 10:00:00 AM No comments: