Last Call For The Cycle Of Tragedy

Another hideous mass shooting, this time at a community college in Oregon, where 14 people died including the gunman who opened fire on students in class. President Obama once again addressed the nation as mourner-in-chief, but this time around he expressed significant frustration at Congress for failing to act yet again on gun control.


During a brief televised statement delivered at the White House , the president lashed out at those who oppose gun limits by saying that their answer to such tragedies are more guns, not fewer.

“Does anybody really believe that?” he asked, clearly outraged.

The Oregon attorney general said that at least 13 people were killed Thursday when a gunman opened fire on the campus of Umpqua Community College in Roseburg, Ore.

Mr. Obama pointed out that states with more gun restrictions tended to have fewer gun deaths, and countries like Britain and Australia with far stricter gun laws have much fewer gun deaths.

“So we know there are ways to prevent it,” he said.

Mr. Obama asked news organizations to tally the number of Americans killed by terrorist attacks over the last 10 years and to compare that with those killed by domestic gun violence. And he implicitly compared the trillions of dollars spent and multiple agencies devoted to prevent the relatively few terrorist deaths with the minimal effort and money spent to prevent the far greater tragedy of gun deaths.

And then he challenged voters to make gun safety a priority.

“If you think this is a problem, then you should expect your elected officials to reflect your views,” the president said.

And he promised to continue hammering away at the issue for the rest of his presidency.


And each time it happens, Mr. President, our Congress will make sure nothing is done.  And until we as voters start firing members of Congress over lack of gun safety laws, nothing will change.

Race To The Bottom In Pennsylvania Schools

A new study profiled in The Atlantic finds that in Pennsylvania's heavily segregated school districts even the presence of 5 or 10% students of color greatly reduces the funding a district gets from the state.


In America, schools with a lot of minority students are chronically underfunded. Is that the case because these students are poor, and poor communities have fewer resources for funding their schools? Or, is it because of the color of these students’ skin?

Unsettlingly, recent research from data scientist David Mosenkis finds that poverty alone does not explain the underfunding. Mosenkis delved into funding data for 500 school districts in the state of Pennsylvania. Because richer school districts are able to drum up more cash through taxes, they should receive less state funding, and poorer districts should receive more. He looked at how much money they received and sorted those findings based on race and income.

Using a broad scope, Mosenkis found what one might expect: On the surface poor districts do receive more state funding than rich schools. But when he delved deeper into the data, sorting by race, what he found was disturbing.

If you color code the districts based on their racial composition you see this very stark breakdown. At any given poverty level, districts that have a higher proportion of white students get substantially higher funding than districts that have more minority students.” That means that no matter how rich or poor the district in question, funding gaps existed solely based on the racial composition of the school. Just the increased presence of minority students actually deflated a district’s funding level. “The ones that have a few more students of color get lower funding than the ones that are 100 percent or 95 percent white,” Mosenkis said.

Issues with scarce budgets and troubled urban schools aren’t new, and they exist all over the country. In an article published in The Atlantic in 1954, Henry I. Willett attempted to answer the question of whether or not public schools cost too much by saying, “The amount spent for educational purposes as compared with amounts spent for many other items and services, including luxuries, would indicate that the importance of education in our democracy is not yet realized: and the hour is growing late.”

In Pennsylvania, the crisis is particularly acute. The state’s former governor stripped the education budget significantly. In the years since, schools have shuttered, teachers have been fired, and the schools that remain are existing on bare-bones budgets. Earlier this year, two children died after getting sick at district schools where no nurses were on duty due to budget reductions. Pennsylvania is also one of the only states in the country that hasn’t had a specific formula in place for distributing government aid to its districts. That’s left lots of room for partisan politics and funding bias.


The results are pretty shocking.  At every level when controlling for class, majority white school districts in the state get more funding from the state per student than districts where the majority consists of students of color: 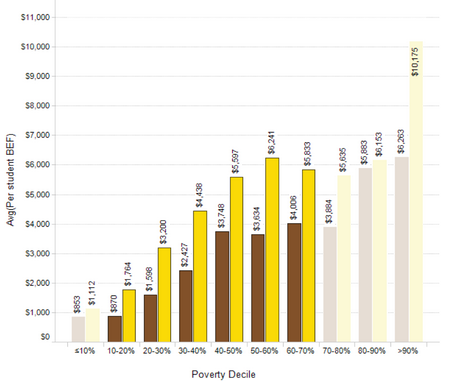 Democratic Gov. Tom Wolf, elected last November, is trying to change that.  But Republicans in the state's legislature have yet to pass a budget.

We're repeatedly told the problem can't be systemic racism because in 2015 that simply doesn't exist, it's just class.  This study controls for class and greatly seems to prove otherwise, and the state is far from alone.
Posted by Zandar Permalink 4:00:00 PM No comments:


Sean Hannity was pushing hard, asking House Majority Leader Kevin McCarthy to name some promises his Republicans had actually delivered on. He scoffed when McCarthy said the party would start undoing the Affordable Care Act -- "you have the power of the purse!" He talked over McCarthy when the leader and candidate for Speaker of the House suggested that the party did not need to cut funds for President Obama's "amnesty," because courts had taken care of it. Only halfway into the interview did McCarthy finally catch a break.

"Everybody though Hillary Clinton was unbeatable, right?" McCarthy asked. "But we put together a Benghazi special committee, a select committee. What are her numbers today? Her numbers are dropping. Why? Because she's untrustable. But no one would have known any of that had happened, had we not fought."


Oh Kevin, you special little snowflake.  You walked right into the jet intake on this one.

"This is a damning display of honesty by the possible next Speaker of the House," press Secretary Brian Fallon said in a statement emailed to POLITICO. "Kevin McCarthy just confessed that the committee set up to look into the deaths of four brave Americans at Benghazi is a taxpayer-funded sham. This confirms Americans' worst suspicions about what goes on in Washington."

Committee Chairman Rep. Trey Gowdy (R-S.C.) has long insisted that his aim is solely to understand what went wrong in Benghazi, and not to attack Clinton. "‘While much outside attention has been paid to the former secretary, this investigation has never been about her and never will be," he said in September.

But on Tuesday night, McCarthy suggested the opposite to Fox News host Sean Hannity.

Now, I know that in certain Beltway circles telling the truth is considered one of the worst possible gaffes, but McCarthy bragged about the effectiveness of this smear campaign precisely because he wanted to remind people that the Republicans deserve credit for finding ways to effectively fight back against the Democrats. In other words, he was reminding the Republican base voter that there actually areexamples where the Republican leadership did something extraordinarily partisan and obnoxious and that it worked. The reaction will probably be exactly what he hoped for. He gets a pat on the head and a couple of “Atta Boys.”

The idea that Republican members of Congress will clutch their pearls in horror that McCarthy defended their performance is a big reach, in my opinion.

These folks are so beyond the norms of behavior that you’d expect of your children that it’s absurd to hold them to those kind of standards. When one of them gets caught in a lie, that’s a badge of honor, and it’s not even remotely problematic to get caught telling the truth if the truth is that you’ve been lying.

If you think I am engaging in hyperbole here, just remember back when Mitt Romney set the land-speed record by telling 533 lies in a mere 30 weeks- (and that tally ended in August). Republicans did not blink. They had no problem with Romney’s pathological relationship with the truth. If anything, they wanted him to be a more convincing liar.

Look at Carly Fiorina right now. She’s doing well, recently, and how many of the people running against her have questioned her truthfulness? It’s not an issue for them. It’s not something they can score political points with, because the base does not want their heroes to tell the truth.


So no, it won't hurt McCarthy with his base one bit.  Whether or not it will hurt him with the Village...well they've been attacking Hillary for years now.  Why would this make them stop?
Posted by Zandar Permalink 10:00:00 AM No comments: