We openly arrest journalists on live TV in America now, because we all live in a fascist police state and have for years.

A CNN crew was arrested while giving a live television report Friday morning in Minneapolis -- and then released about an hour later -- as the crew covered ongoing protests over the death in police custody of George Floyd.

State police detained CNN correspondent Omar Jimenez, his producer and his photojournalist shortly after 5 a.m. CT (6 a.m. ET) as Jimenez was reporting live from a street south of downtown, near where a police precinct building was earlier set ablaze.

Jimenez could be seen holding his CNN badge while reporting, identifying himself as a reporter, and telling the officers the crew would move wherever officers needed them to. An officer gripped his arm as Jimenez talked, then put him in handcuffs.

"We were just getting out of your way when you were advancing through the intersection," Jimenez continued.

Police told the crew they were being detained because they were told to move and didn't, one member of the CNN crew relayed to the network.

Minnesota Gov. Tim Walz told CNN Worldwide President Jeff Zucker that he deeply apologizes for what happened and would work to have the crew released.

Later, after the crew was freed, Walz told reporters: "We have got to ensure that there is a safe spot for journalism to tell the story."

The troopers were clearing the area at Walz's direction, he said, adding there was "absolutely no reason" for the journalists' arrests and that he takes full responsibility.


Jimenez is Afro-Latino, his CNN colleague Josh Campbell, who is white and was a block away, was treated normally by the police.

CNN's Josh Campbell, who also was in the area but not standing with the on-air crew, said he, too, was approached by police, but was allowed to remain.

"I identified myself ... they said, 'OK, you're permitted to be in the area,'" recounted Campbell, who is white. "I was treated much differently than (Jimenez) was."

Jimenez is black and Latino. Kirkos is white, and Mendez is Hispanic.


Any questions about Trump calling CNN "enemies of the people" being a bad thing, or are we still on "Trump doesn't mean what he says" as shitty excuse?

I predicted yesterday that Twitter would fold like a house of cards as they have every other time before when it came to Donald Trump using their social media platform against the company's stated terms of use that until now, would have generated some sort of account penalty or tweet removal for anyone else on the planet. That was until last night when Trump reacted to the Minneapolis police using violence against protesters and sparking major civil unrest in the city with a call towards more violence against black America, and Twitter took action.

Twitter said Friday morning that a tweet from President Trump in which he threatened shooting in response to civil unrest in Minneapolis violated the company's rules. The company said it was leaving the tweet up in the public interest. 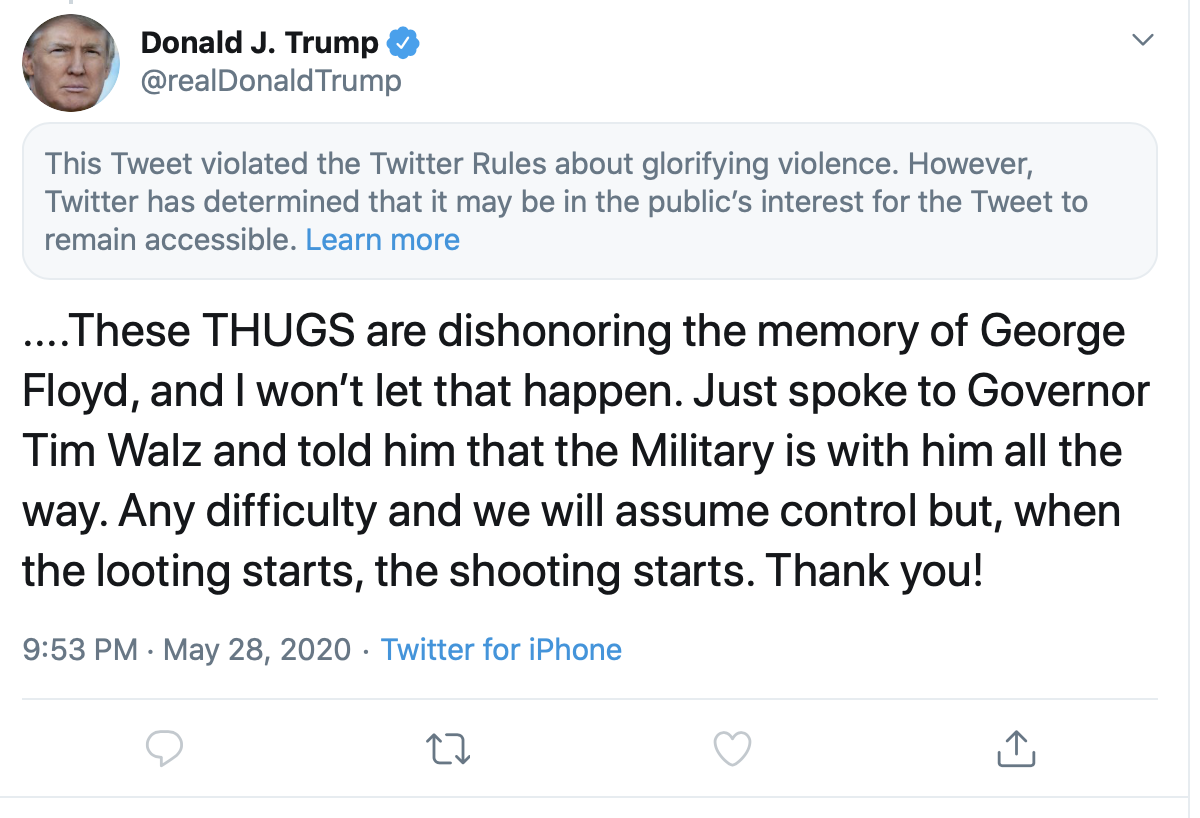 Why it matters: The move exacerbates tensions between Twitter and Trump over the company's authority to label or limit his speech and, conversely, the president's authority to dictate rules for a private company.


Trump's outright threat against the people of Minneapolis is example #75927 of his absolute unfitness for the job he's in, and it looks like we may have finally hit the point where we're about to have a summer of breathtaking violence on top of a pandemic that is killing thousands of Americans per week on top of a massive economic depression.

Last night seemed like a new chapter in the story began, and at this point I fully expect it to be written in blood.

The line about looting and shooting is the same quote made by former Miami Police Chief Walter Headley. The following is an excerpt from a December 28, 1967 article by United Press International about what was described as Headley's "shotgun crackdown on Negro slum hoodlums."

"In declaring war on 'young hoodlums, from 15 to 21, who have taken advantage of the civil rights campaign,' Headley said, 'we don’t mind being accused of police brutality.'

'They haven’t seen anything, yet.'

Headley said Miami hasn't been troubled with racial disturbances and looting because he let the word filter down, 'When the looting starts, the shooting starts.'"


Trump wants blood so badly right now, and he's going to get it.
Posted by Zandar Permalink 4:00:00 PM No comments:


A police precinct was burning in Minneapolis late Thursday as protests over the death of George Floyd raged on for a third straight day.

Protesters had focused their attention on the Police Department's 3rd Precinct, the base of four officers who were fired after Floyd's death in their custody Monday.

A fire appeared to have spread to the interior of the stations, which police had evacuated. They cleared the building shortly after 10 p.m., when demonstrators forcibly entered and "ignited several fires," department spokesman John Elder said.

Fires also burned on both sides of the police station as demonstrators pushed down temporary fencing and occupied property at the precinct. Officers fired tear gas from the ground and a rooftop.

The city of Minneapolis on Twitter urged people to "retreat" from the area as a precaution. "We're hearing unconfirmed reports that gas lines to the Third Precinct have been cut and other explosive materials are in the building."

Police said late Thursday no serious injuries had been reported.

The Minnesota guard said on Twitter that 500 soldiers have been activated for duty in the Twin Cities. "Our mission is to protect life, preserve property and the right to peacefully demonstrate," it said.

Gov. Tim Walz signed an executive order Thursday activating the Minnesota National Guard. A statement from the governor's office said the order was needed after "extensive damage to private property occurred and peaceful protests evolved into a dangerous situation for protesters and first responders."

Businesses across the Twin Cities were boarding up their windows and doors Thursday in an effort to prevent looting.

Looters on Thursday broke into a Target on University Avenue in St. Paul before police arrived, sending the raiders scrambling.

But as police circled the store and faced off with an angry crowd, looters broke into a T.J. Maxx close by and made off with whatever they could carry. That store was later reported to be on fire.

"Officers continue to be hit with rocks and bottles thrown by people who are also breaking into buildings, looting and destroying property," St. Paul police said on Twitter.


And Black Lives still matter, even as Hennepin County refuses to bring charges against a monster who murdered a man in public with dozens of witnesses.

Prosecutors looking at the death of George Floyd on Thursday asked the people of Minneapolis for patience while they investigate the case that has riled the city and the nation.

Floyd, a 46-year-old black man, died after pleading for help as a police officer used his knee on Floyd's neck to pin him -- unarmed and handcuffed -- to the ground. His death sparked outrage and protests across the country, demonstrations that continued Thursday.

In Minneapolis, hundreds of people gathered outside the police departments Third Precinct. Some protesters brought signs and some threw rocks. A temporary fence in front of the station was knocked over. Police responded with tear gas, rubber bullets and bean bags fired at rock throwers.

Earlier, Hennepin County Attorney Michael Freeman, giving an update to reporters on the case, said he must look at all evidence before bringing charges.

"My job in the end is to prove he violated a criminal statute. And there is other evidence that does not support a criminal charge. We need to wade through all of that evidence and come to a meaningful decision and we are doing that to the best of our ability."


It's been centuries, but sure.