I've written numerous articles about Forbes's point man on anti-Obamacare propaganda, Avik Roy, and his ridiculous "estimates" about Obamacare.  But the man hits a new low with his insane claim that the Affordable Care Act will cost 93,000,000 Americans their health insurance.

Section 1251 of the Affordable Care Act contains what’s called a “grandfather” provision that, in theory, allows people to keep their existing plans if they like them. But subsequent regulations from the Obama administration interpreted that provision so narrowly as to prevent most plans from gaining this protection.

“The Departments’ mid-range estimate is that 66 percent of small employer plans and 45 percent of large employer plans will relinquish their grandfather status by the end of 2013,” wrote the administration on page 34,552 of the Register. All in all, more than half of employer-sponsored plans will lose their “grandfather status” and get canceled. According to the Congressional Budget Office, 156 million Americans—more than half the population—was covered by employer-sponsored insurance in 2013.

Another 25 million people, according to the CBO, have “nongroup and other” forms of insurance; that is to say, they participate in the market for individually-purchased insurance. In this market, the administration projected that “40 to 67 percent” of individually-purchased plans would lose their Obamacare-sanctioned “grandfather status” and get canceled, solely due to the fact that there is a high turnover of participants and insurance arrangements in this market. (Plans purchased after March 23, 2010 do not benefit from the “grandfather” clause.) The real turnover rate would be higher, because plans can lose their grandfather status for a number of other reasons.

How many people are exposed to these problems? 60 percent of Americans have private-sector health insurance—precisely the number that Jay Carney dismissed. As to the number of people facing cancellations, 51 percent of the employer-based market plus 53.5 percent of the non-group market (the middle of the administration’s range) amounts to 93 million Americans.


Except Roy is, as usual, completely full of crap.  What the administration was saying is that the estimates were simple:  the plans don't meet coverage standards, so they are getting replaced and won't be grandfathered.  Roy counts that as "canceled".  He then declares the notion that the replacement plans are better as a lie.

But that’s not true. Obamacare forces insurers to offer services that most Americans don’t need, don’t want, and won’t use, for a higher price. Bob Laszewski, in a revealing blog post, wrote about the cancellation of his own health coverage. “Right now,” he wrote, “I have ‘Cadillac’ health insurance. I can access every provider in the national Blue Cross network—about every doc and hospital in America—without a referral and without higher deductibles and co-pays.”

But his plan is being canceled. His new, Obamacare-compatible plan has a $500 higher deductible, and a narrower physician and hospital network that restricts out-of-town providers. And yet it costs 66 percent more than his current plan. “Mr. President,” he writes, “I really like my health plan and I would like to keep it. Can you help me out here?”


So Roy finds one guy and it's proof Obamacare doesn't work and that 93 million people will "lose their health coverage".  The lies never stop with this clown.  The reality: 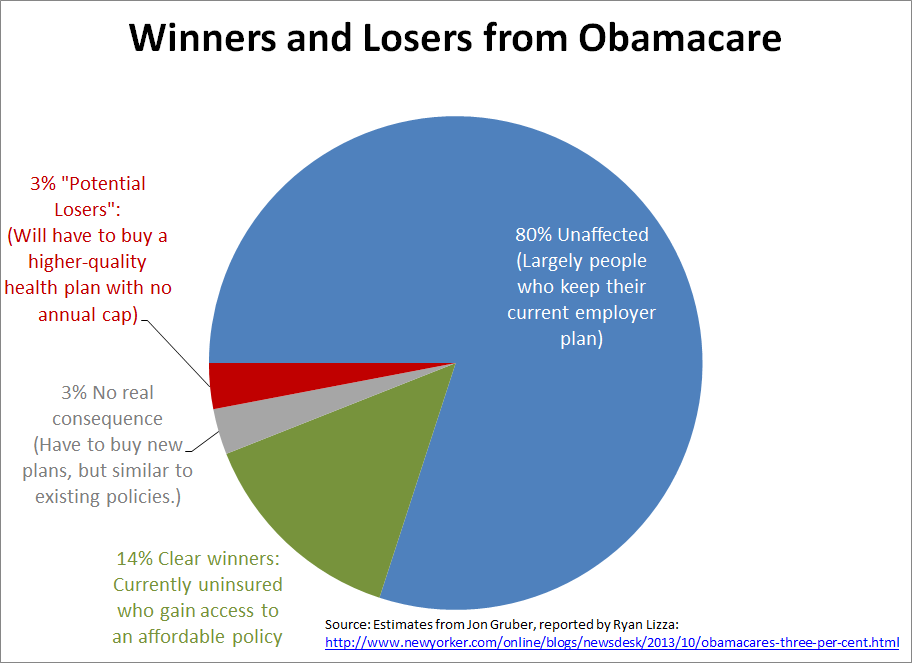