Last Call For The Beckies Come Around

I've taken white women voters to task before as being the group that made the difference in 2016 in giving Trump and the GOP power.  But if a new Washington Post poll is correct, white women now prefer the Democrats going into the 2018 midterms, and if it holds up, the GOP is looking at a bloodbath in November.


Strong support from women and independents is fueling Democrats’ large early advantage ahead of this year’s congressional elections, a sign that two groups that have recoiled from Donald Trump’s presidency will play a decisive role in November, according to a new Washington Post-ABC News poll.

The ongoing government shutdown and rising economic optimism are just two factors that could shuffle preferences over the nine months before Election Day, with Republicans hoping to take more credit for economic growth and cast Democrats as anti-Trump obstructionists.

By 51 percent to 39 percent, more registered voters say they would support the Democratic candidate in their congressional district over the Republican. Democrats’ 12 percentage-point advantage on this “generic ballot” question is the largest in Post-ABC polling since 2006, although it is slightly larger than other polls this month.


That 12 point lead is certainly heartening, but it's the crosstabs that tell the real story: the GOP has lost women completely, even white women.

The Post-ABC poll finds Democrats holding a 57 percent to 31 percent advantage among female voters, double the size of Democratic presidential nominee Hillary Clinton’s margin in the 2016 election. Nonwhite women favor Democrats by a 53-point margin, somewhat smaller than Clinton’s 63-point advantage over Trump in 2016. But white women have moved sharply in Democrats’ direction, favoring them over Republicans by 12 points after supporting Trump by nine points in 2016 and Republican candidates by 14 points in the 2014 midterm election, according to network exit polls.

Partisan loyalty is strong, with Republican and Democratic candidates garnering support from at least 9 in 10 of their fellow partisans, but self-identified political independents favor Democrats by a 16-point margin, 50 percent to 34 percent. The swing group has been decisive in three consecutive midterm election waves, backing Republicans by 19 points in 2010 and 12 points in 2014, but supporting Democrats by 18 points in 2006 as they retook control of the House.


Independents strongly favor the Dems right now as well.  And as far as blame for the shutdown?  Americans blame Trump and the GOP 48-28% over the Democrats, with 18% saying both sides.  That means that even accounting for the both sides folks, less than half put some or all of blame on the Dems, while two-thirds blame the GOP in part or in whole for the Trump Shutdown.

The Republicans are in trouble and they know it.  Follow-up: FiveThityEight's Harry Enten finds that among all races and all political persuasions, Trump has a serous gender gap issue with women: 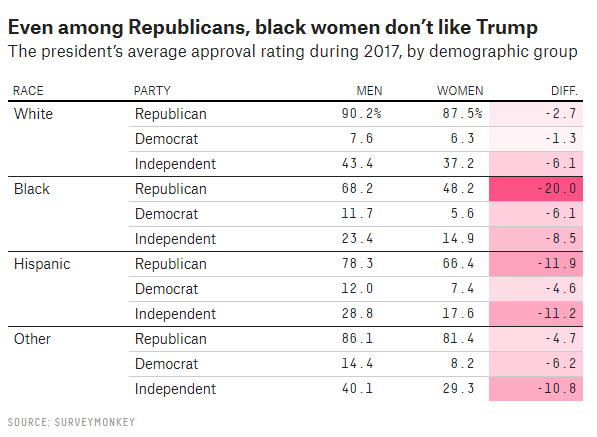 Email ThisBlogThis!Share to TwitterShare to FacebookShare to Pinterest
StupidiTags(tm): 2018 Elections, GOP Stupidity, Trump Regime, Vote Like Your Country Depends On It