Last Call For America Gets That Poll-Axed Look, Con't

PPP’s newest national poll finds that Americans like the high school students leading protests against gun violence across the country a whole lot more than they like the NRA. The high school students receive a positive 56/34 favorability rating for their efforts, while the NRA is upside down with 39% of voters seeing it favorably and 44% negatively.

There’s 87% support for background checks for all gun buyers, compared to only 8% of voters who are opposed to that. That policy has the backing of 89% of Democrats and 85% of Republicans and independents. It’s hard to find anything 87% of Americans agree on- in fact on this same poll we found that only 81% think the sky is blue with 11% disputing that notion.

One new gun proposal voters don’t like though is giving them to teachers. Only 35% of voters think that’s a good idea, to 53% who say it’s a bad one.


Even Republicans want to ban assault weapons.  And yet, Congress will never touch this with the NRA GOP in charge.  So how are Republicans faring heading into November?

Democrats continue to have a solid advantage on the generic Congressional ballot, leading 50-39. That edge grows to 55-39 among voters who say they’re ‘very excited’ to vote this year. Democrats lead by 14 points at 44-30 among independents.

One piece of the Democratic advantage is that Republican Congressional leaders are extremely unpopular. Only 23% approve of the job Paul Ryan is doing to 58% who disapprove. He is only narrowly popular with Trump voters (44/39) and almost universally disliked by Clinton voters (6/76). Mitch McConnell is even worse off, with only 12% of voters approving of him to 62% who disapprove. He has similar numbers to Ryan with Clinton voters (7/69) but in contrast to Ryan is strongly disliked even by Trump voters (21/54). In 2010 Republicans used Nancy Pelosi’s unpopularity to great effect- Democrats may be able to do the same thing with Ryan and McConnell this time around.

Another thing causing Republicans trouble is that the tax bill isn’t doing them any favors. Only 31% of voters say they support it to 40% who are opposed. Continuing with that 31% figure, only 31% of voters think the tax plan is actually going to help their family’s finances with 33% saying they think it will actually hurt, and 29% saying they think it will not have any impact. 57% think the tax plan will mostly help the rich to 29% who think the middle class will be the biggest beneficiaries.


The extremely unpopular Donald Trump isn't helping them either, his approval rating is stuck at 39%.  But speaking of 39% as a specific poll result... 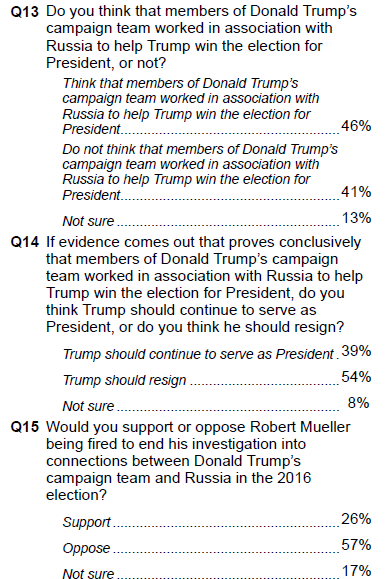 So 46% of Americans believe Trump colluded with the Russians, but 39% would want Trump to remain president even if Mueller dropped conclusive evidence that collusion happened. A quarter of Americans in fact want Mueller fired. 37% of people believe the entire Russian collusion issue is fake news anyway.

When people say Mueller will not save us, I'm inclined to believe them if 2 out of 5 people think Trump should stay in office no matter what illegality he has done. Again, the true solution is Democratic domination of the 2018 elections at both the state and federal level.
Posted by Zandar Permalink 10:00:00 PM