With two weeks to go, it's becoming a question of how big the bloodbath in the House is going to be for the GOP.  Dave Wasserman at Cook Political Report:

A new NBC/Wall Street Journal poll shows Democrats enjoy a four-point lead in midterm election interest, narrower than their ten points average lead for the first nine months of the year. It's likely that cultural flash points like the Kavanaugh confirmation fight and the "migrant caravan" are better-suited to rallying and awakening the Trump base than tax cuts, which mostly fell flat for Republicans in this year's special elections.

However, Democrats' staggering success in third quarter fundraising reports injects some last-minute uncertainty. An astounding 112 Democrats outraised GOP opponents in Republican-held seats between July and September. Of the 93 GOP incumbents who were outraised, 20 are currently in our Likely Republican column and 23 in Solid Republican. Democrats' late dominance in the air wars could produce several Election Night surprises.

Today, we're changing ratings in ten districts, including eight where Democrats' position has improved. Democrats now have a clear advantage in 17 GOP-held seats and Republicans have an advantage in two Democratic-held seats. If the 30 Toss Ups were to break evenly between the parties (15 seats apiece), Democrats would score a net gain of 29 seats, six more than the 23 they need to retake the majority.


And history tells us that toss-ups don't break evenly, but that a vast majority go to one side.  Cook's prediction of 29 is conservative, I personally think Dems can take 24 of those 30 tossups, plus 10 or 12 more of the GOP leaners in those surprise wins.  That would give Dems close to a 2010-style wave win of 50 or so pickups. 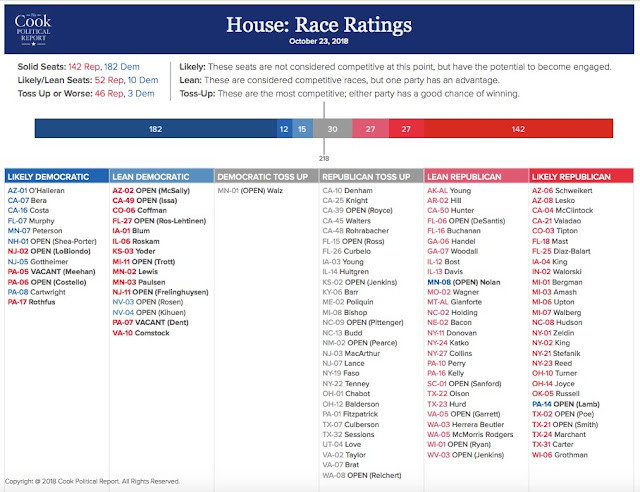 But again, that all depends on turnout.  If Republicans show up and we don't, all this crumbles to dust.  And we have to show up in numbers that not only beat systemic GOP voter suppression efforts, but historical midterm apathy and the Trump fear card rallying his toxic, hateful base.

Vote like your country depends on it, because it does.

Email ThisBlogThis!Share to TwitterShare to FacebookShare to Pinterest
StupidiTags(tm): 2018 Elections, Vote Like Your Country Depends On It